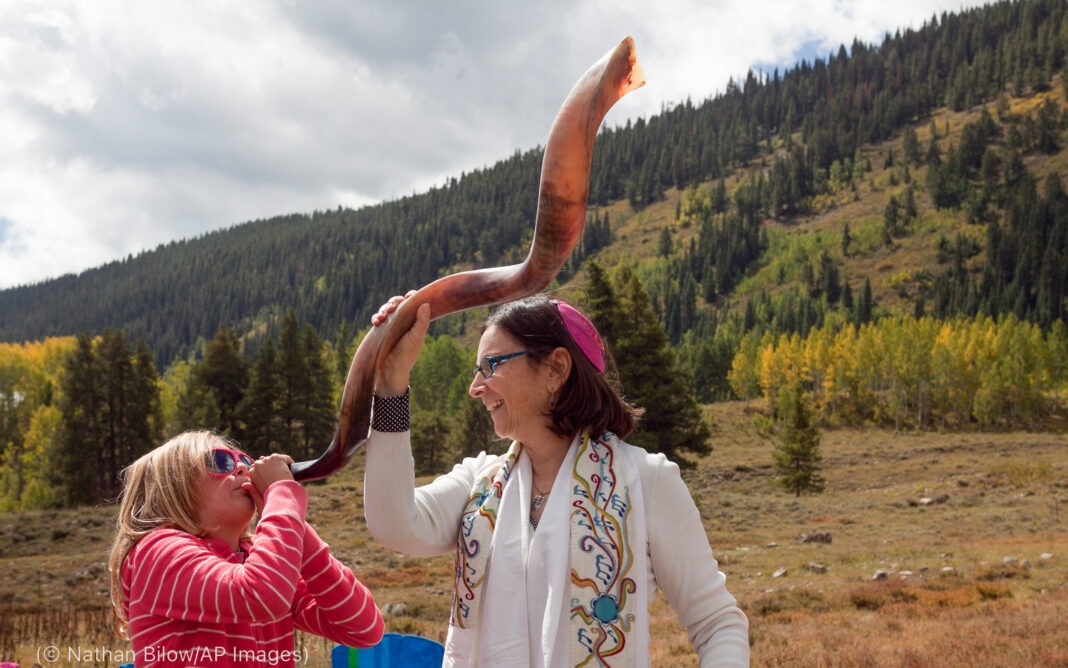 A young girl blows a shofar with the help of a cantor during Rosh Hashanah services in the mountains of Crested Butte, Colorado. (© Nathan Bilow/AP Images)

This is part of an occasional series on how Americans celebrate religious holidays.

A long blast from the shofar, or ram’s horn, announces the arrival of the new year in the Hebrew calendar. For Jews, the sound of the shofar is more than that of a musical instrument whose use dates back to ancient Israel. It is the sound of the presence of God. Every fall — September, October and November in the United States — practicing Jews in America embark on an introspective spiritual journey, beginning with Rosh Hashanah and ending nine days later with Yom Kippur. These two “high holidays” in the Hebrew lunar calendar generally fall in September or October.

This year Rosh Hashanah begins at sunset on September 25. The holiday marks the first day of the Jewish new year and is a time when Jews around the world consider their past year’s deeds.

“Reflect, react, resolve,” says Rabbi Emeritus Lyle A. Fishman of the Ohr Kodesh Congregation in Chevy Chase, Maryland. “Each of us needs to look back honestly,” he says, and consider how to improve. “We must each resolve to move from reflection and reaction to resolute action.”

Many devout hope that by atoning for their sins, their names are entered in a symbolic “book of life” before it is sealed at the end of the 10 days. A common Rosh Hashanah custom is to dip apple slices into honey to illustrate hope for a sweet new year. On the days leading up to Yom Kippur, Jews say daily special prayers, prepare festive meals and make contributions to charities.

The 10th day is Yom Kippur, or the Day of Atonement, the most solemn day on the Hebrew calendar. This year Yom Kippur starts at sunset on October 4. Jews are encouraged to remove themselves as much as possible from everyday cares and instead devote themselves entirely toward their relationship with God.

On Yom Kippur, Jews fast from sundown until sundown the following day. Most of the day is spent in prayer in the synagogue.

The Yom Kippur service closes at nightfall with a long blast from the shofar to symbolize God’s forgiveness of sins for the truly repentant. Song, dance and a festive meal follows, as Jews return to their day-to-day affairs with a sense of renewal and joy. “We listen to the sound of the ram’s horn, as it calls us to renew our lives and to repair the world,” says Rabbi Joseph A. Skloot, who teaches at Hebrew Union College’s Jewish Institute of Religion in New York.

A version of this article was previously published September 27, 2019.