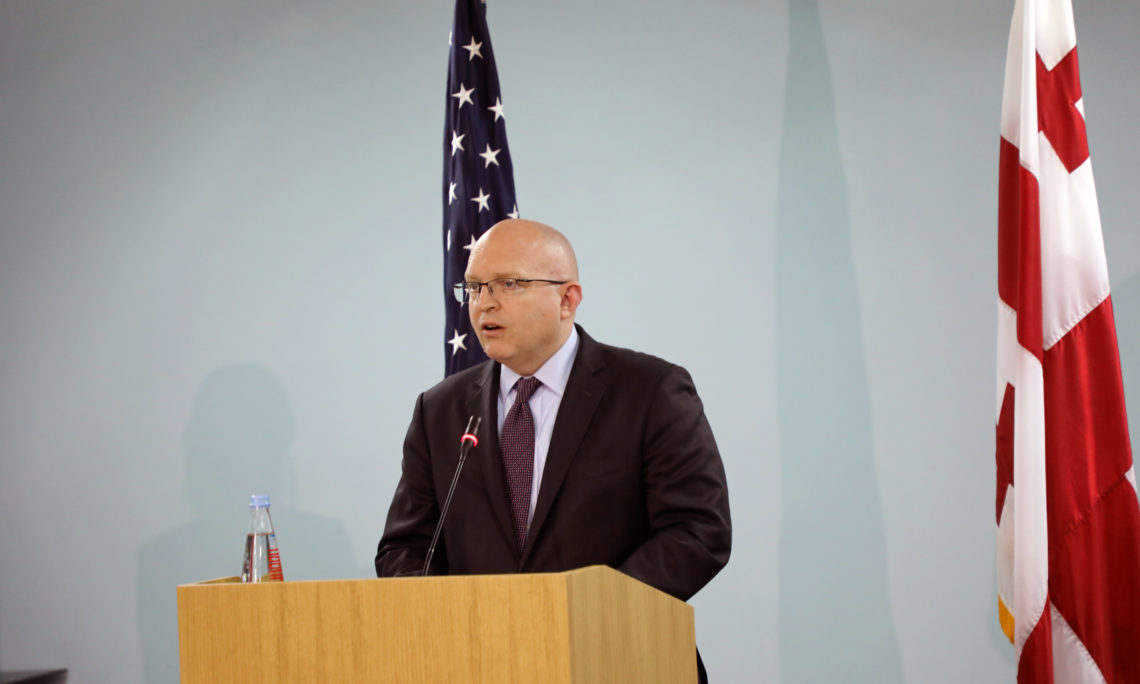 Thank you all for coming, and thank you to Georgia and the Georgian people and the government, for a very warm welcome here and particularly to the conference today. The McCain Institute is an organization I hold very close to my heart. They do terrific work and, working together with the Economic Policy Research Center, putting on this conference every year, I think, is a great opportunity for Georgia and for Georgia’s friends to talk about developments here and to underscore the American part of our support and friendship with Georgia.

I am pleased that this is my first trip to Georgia, and I come on instruction from my boss, Secretary of State Mike Pompeo, who was pleased I could have this opportunity to, not only participate here at the conference but also to meet with Georgia’s leadership, particularly at this important point where you have a new prime minister. I was pleased to be able to meet with the new prime minister briefly last night. I’ll see him again today. I met with the former prime minister and of course, I was in a meeting with Secretary Pompeo last June, just a couple months ago, when the former prime minister visited Washington. So, we’ve had a consistent set of messages about our strong support for Georgia, the friendship that our countries share and our goal to see Georgia continue to strengthen its vibrant democracy and to resist the destabilizing influence that Russia presents, that includes our concerns about the recent activities by Russia on the administrative boundary line, which are an escalation of tensions, and we’ve called on Russia to do everything it can to dial back that escalation and of course live up to their commitments under 2008 ceasefire [agreement].

Let me just finish my opening remarks by underscoring how much the United States values Georgia’s contributions, particularly to NATO’s Resolute Support Mission in Afghanistan, to all that Georgia does in participating in and hosting bilateral and multilateral exercises and the continued hard work Georgia does to build capacity towards self-defense through the Georgia Defense Readiness Program. I’m joined during this visit by my colleague from the Department of Defense, Deputy Assistant Secretary of Defense Laura Cooper, who has joined me in a number of meetings and will have meetings of her own. This is a similar message that Secretary Pompeo stressed on June 11th when he spoke with then-Prime Minister Bakhtadze underscoring that the United States supports Georgia as it seeks NATO membership and greater economic integration with the European Union and with the West more broadly.

What makes NATO successful and important to maintaining stability and peace across the transatlantic region is the resilience of the societies of the countries that belong to NATO, and its a resilience that lies in a shared set of values upheld by all NATO member countries and that is a continued commitment, by every country in the alliance, to the principles of democracy, individual liberty, and the rule of law. And these, of course, these values are the fundamental, foundational elements of the U.S.-Georgia partnership. And we will continue to work with Georgia, including through various assistance programs, to help the Georgian government and people continue to build a more resilient society that can withstand the pressures of Russian malign influence and help underscore Georgia’s Western outlook and trajectory and integration into this key institution.

q-n about the timeframe of the appointment of the new U.S. Ambassador to Georgia. Do the developments in Rustavi 2 make the U.S. question media pluralism and freedom of speech protection in Georgia and are there plans to discuss this issue with the Georgian government.

Acting Assistant Secretary Phil Reeker: Thank you for the question and thank you for recognizing the nomination of President Trump’s selection as the next U.S. Ambassador to Georgia. Kelly Degnan is a colleague and a friend of mine. For many years, we worked together closely in Italy. In recent years, she comes from the U.S. Embassy in Rome where she was our Deputy Chief of Mission, but she has a tremendous background, including service in Afghanistan, service at the U.S. Mission to NATO and currently as the Political and Foreign Policy Advisor to the Commander of U.S. Naval Forces in Naples. So she is eminently qualified and prepared to take charge of our mission in Georgia. That, of course, is up to the United States Senate, she has to go through the process of nomination and confirmation and I can’t predict for you exactly when that will happen, but as our Senate comes back into session, I am sure they will be looking at the calendar. We can expect, we hope, a hearing for Ms. Degnan and then it is up to the Senate to proceed with the confirmation process. And of course, in the meantime, our mission here in Georgia continues its very active engagement on behalf of the United States, on behalf of the U.S.-Georgia partnership under the leadership of Elizabeth Rood, our Charge d’Affaires and the great team of diplomats we have there. Secretary Pompeo is extremely proud of this team in this mission and I was very pleased that I could visit the embassy today. It’s a beautiful embassy just in terms of its architectural presence. It contributes, we believe, to the landscape of Tbilisi, but most importantly, to our ongoing Georgia-U.S. partnership and friendship.

As to your second question, let me just underscore that we believe, like every country, Georgia too must continue to move forward to ensure that the political environment here is conducive to pluralism in civil society, political participation, and the media. Those are all important elements in any democracy. They are important in my country, and they are a common set of elements in NATO member states. Again, it goes back to the set of values that we believe we share with the Georgian people and we share among all NATO allies. There’s a responsibility for political figures, for leaders, to present campaigns that are based on policies and ideas for the country’s progress and development and that includes demonstrating support for independent media. And that will be important in this year ahead, which is, of course, a campaign year leading to your 2020 elections.

q-n: how do changes in government affect the relationship between the U.S. and Georgia as decision-makers are often changed and their accountability is questioned.

Acting Assistant Secretary Phil Reeker: Well, again there is a set of common values that we believe we share with the Georgian people that have to do with pluralism in civil society, political participation, media and of course, the political environment. I know we’ve said a number of times that Georgia’s decision to move to a proportional electoral system for the 2020 parliamentary elections, we believe, is a positive step, and we’ve been urging Georgia to move forward on concrete measures to ensure that elections allow all of the candidates to compete on a level playing field, just like in the business environment, you need to ensure that there is a level playing field for companies, both domestic and international, who want to participate in the economy here, whether it’s an investment or trade. A level playing field is crucial. On the political side, a “level playing field” means that votes are cast freely, and this will be an opportunity for Georgia next year, in 2020, to really demonstrate its commitment to democratic values. There are recommendations from OSCE’s ODIHR after the 2018 presidential election, and all of these will allow Georgia to move forward, ensuring this conducive political environment that reflects that set of values we have and we believe that the Georgian people fundamentally share those values, and we will want to move forward again. This will help with Georgia’s progress integrating into the West and Euro-Atlantic institutions.