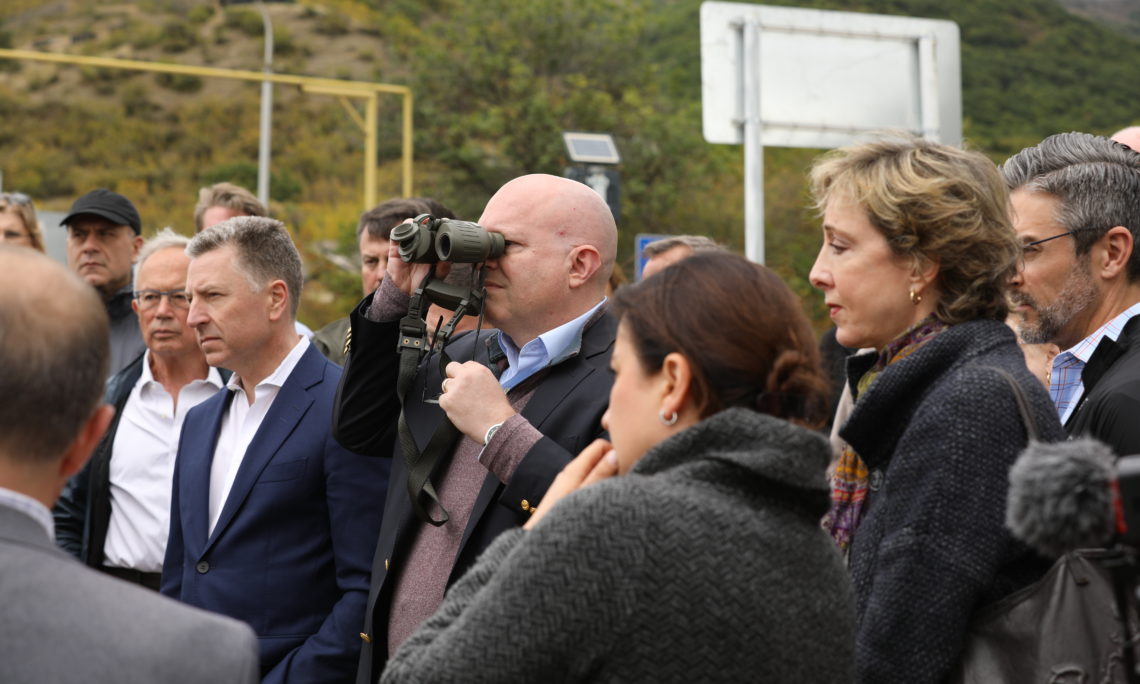 Acting Assistant Secretary Phil Reeker:  Thank you all for coming today.  It is an honor for me to be able to visit Georgia, to see the great progress this country has made.  The United States has a long and strong partnership with Georgia.  To come here and have this briefing today is very important because we are very concerned about the buildup of Russian troops along the administrative boundary line here and the resumption of construction of fencing and other efforts at borderisation in this decade-long situation.  The reports of efforts to construct a new police presence on the ABL represent an escalation by Russian forces in this region.  The United States calls upon Russia to pull back its troops, to live up to their commitments under the 2008 ceasefire agreement and indeed to withdraw and end the decade-long occupation of one-fifth of Georgian territory.  So I look forward to meetings with Georgian counterparts and officials, including the new prime minister, over the next day and a half, and again, I am very pleased to be here with an international group in this corner of Europe, which is very important to us and, of course, to the Georgian people, to see and end to this ongoing occupation by Russian forces.

Acting Assistant Secretary Phil Reeker:  Russian tactics are well-known now to all of us across Europe, in the United States, around the world – this effort by Russia to influence through a variety of means including, of course, this military presence and the recent buildup, which is a great concern to us.  There is a Russian flag right here.  You do not have to look far to see it – to see this Russian effort.  So, there are mechanisms with which to deal with this ongoing situation, but of course, Russia made commitments in 2008 to withdraw its troops to the lines before the conflict.  They have not lived up to those commitments and they are continuing to occupy one-fifth of Georgia.  We see this pattern in other places of course –  in Ukraine – and it has been a great concern to us.  Now, for a decade we have seen this sort of Russian behavior, malign efforts, illegal, against the interests we would all like to promote, for a more stable and peaceful Europe.

Acting Assistant Secretary Phil Reeker:  Well, I think we are just a little more than an hour outside the capital, Tbilisi, a thriving European city, which demonstrates the great progress that can be made when you have stability and you have peace.  This kind of presence and these sorts of activities by Russian forces only serve as an effort to disrupt those activities.  So, I look forward to meeting with Georgian authorities tonight and tomorrow during my visit here and discussing the efforts they are making.  Of course, the United States remain a great partner of Georgia.  We do a lot together, along with our European friends and allies, who are here and express their concerns about the situation here, as well.

Q-n about the Patriot of Alliance Party’s suggestion the Government should talk directly with Moscow, and if the direct dialogue with Moscow can be efficient

Acting Assistant Secretary Phil Reeker:  Look, there are processes through Geneva by which these issues are discussed.  I look forward to meeting with Georgian officials, as I said, over the next day and a half, to discuss this situation and broader issues for Georgia.  It is my first time to visit here, and Secretary of State Pompeo asked me to come in person here and use this opportunity to meet with the new Prime Minister and other officials, as well as to visit this point here near the administrative boundary line.  And, here we see, yet again, another checkpoint that has been closed off for no reason, disrupting the lives of people in these communities nearby, making it difficult for them to go about their lives and for their families to live normal lives.  I think that is what’s of concern to, of course, Georgian authorities and of concern to the friends of Georgia, including the United States.