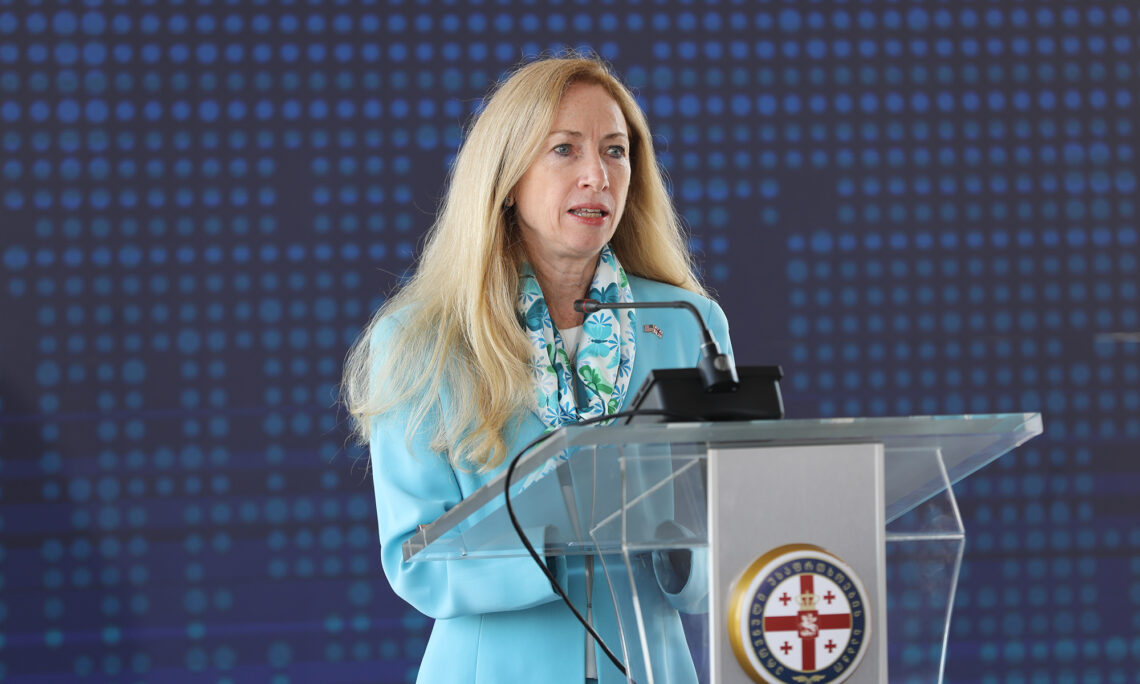 Today, Ambassador Kelly C. Degnan gave remarks at the Cybersecurity Forum 2020 which brought together Georgia’s senior-level officials and other stakeholders to discuss the important issue of cybersecurity and ways to better protect Georgia from cybersecurity threats.

Ambassador Degnan also underlined the need for continued effort to ratify Georgia’s national cybersecurity strategy and to clearly delineate roles and responsibilities in the cyber realm.

The United States will continue to work together with the international donor community to provide support to Georgia in achieving its cybersecurity goals.

Ambassador Kelly Degnan: I’m very happy to be able to attend the National Security Council’s Cybersecurity Forum. I think the fact that the Prime Minister, Ministers, Ambassadors, other stakeholders are here for this event is a sign of just how important everyone considers strengthening and improving Georgia’s cybersecurity capacities is. The United States has worked very closely and will continue to work very closely with Georgia on building its cybersecurity capabilities, and these relate to cyber networks, protecting critical infrastructure, protecting information security.  And I think, as this is an important election year, information security is more important than ever, so that Georgian voters can go to the polls knowing that their information is going to be secure. The United States urges Georgia to adopt and ratify a comprehensive National Cybersecurity Strategy and action plan without further delay and we also encourage Georgia to clearly delineate the roles and responsibilities in the cyber sector. This will help Georgia be better prepared to eliminate, to reduce vulnerabilities and to respond quickly and effectively when there are attacks. And we are sure there will be more attacks because we are all experiencing them all around the world. Thank you.

Q-n about the violent pre-election campaigns

Ambassador Kelly Degnan: I read the Public Defender’s report of violence and intimidation that I think was released yesterday, of course its very disturbing to hear that people are being intimidated at all, let alone violence. I think we’ve been very clear that that is the kind of activity and behavior that is going to tarnish Georgia’s elections this October. There are, I think it is very fortunate to have international and domestic observers who are already watching the scene carefully, analyzing and assessing what’s going on and they will continue to do so. The Embassy as usual will deploy teams on election day throughout Georgia to augment the observers who are trying Georgia having clean, free, fair election this October. Yesterday, I was here for the launch of the International Republic Institute’s (IRI) Election Compass that was developed with support from Germany, the Netherlands and the USAID. Its tools like this that is going to help Georgians connect with their political parties and better understand what the platforms are and how to make an informed vote on October 31. That’s the way to conduct an election, not through intimidation. My understanding is as the Ministry of Interior Affairs investigated those reports and concluded that various political parties were involved. So I again call on all political parties – make this clean, free, fair election, do it for Georgia!

Ambassador Kelly Degnan: Of course, it is always good news to hear that someone is going to be released when they have been illegally detained to begin with, and I hope that he is in good health and I am sure he’ll be happy very happy to be back with his family. All the detained Georgian citizens need to be released and I hope we’ll see that soon. I think this is an indication that the IPRM is a very effective mechanism and it is extremely positive that it is activated again and producing important results like this. I think this is where we’ll see the most results on the ground.  In the field, people-to-people kinds of interaction resolve these differences. But, very good news that a Georgian is being released. And now, we need all of them to be released. Thank you.