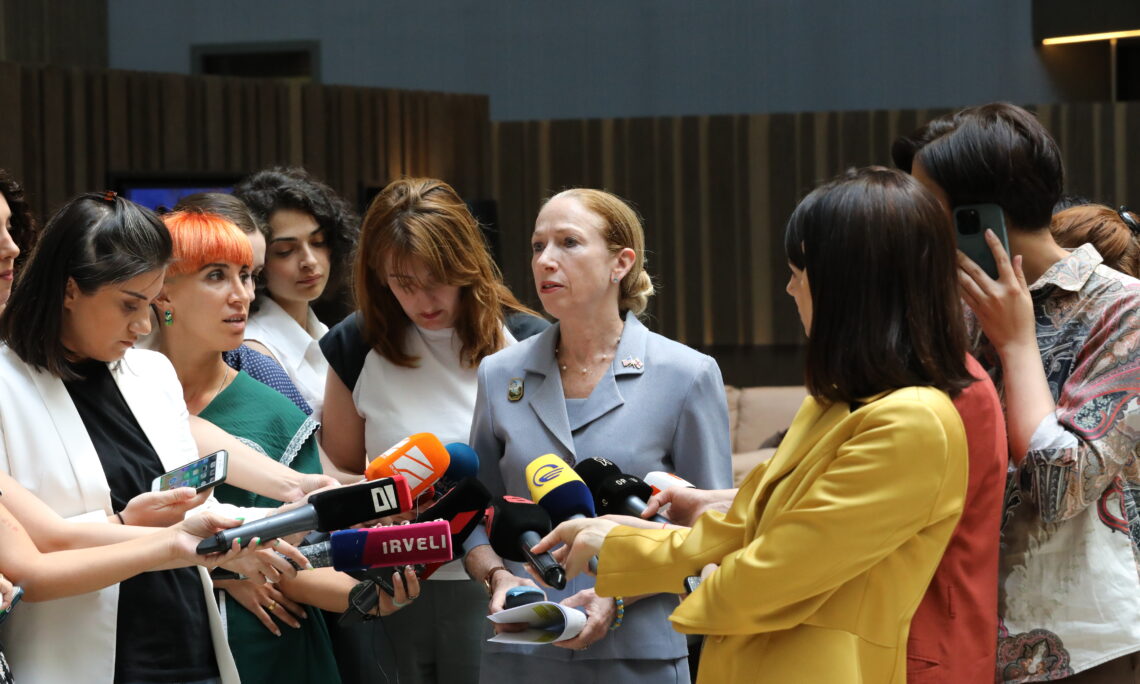 Ambassador Degnan:   Any suggestion that the United States was interfering in the judicial process here is, is simply not true.  We’ve spent years helping Georgia build an independent, impartial, transparent judiciary.  It is an essential pillar of the work that we are doing to help Georgia strengthen its rule of law.  We will continue to work with the many partners we have in Georgia’s judicial system on that very goal, because that is such an important part of a healthy democracy, which is to have an impartial, transparent, independent judiciary.  That is what we’re focused on.  Thank you.

Question about why the judge was not sent on a U.S. exchange program

Ambassador Degnan:  I can’t speak on behalf of the judge.  That wouldn’t be appropriate. I can say our programs are open to the many professionals in the judicial system that are interested in coming to exchange views and best practices with their counterparts in the United States. These have been very successful programs, study groups, and I think have been a great benefit both to Georgian members of the judiciary as well as to their United States counterparts.  So these have been very positive and they remain open to Georgian participants.

Ambassador Degnan:  This is a reminder of why we are so concerned about the reports of surveillance and monitoring of not just journalists, but of others in Georgia.  It’s why we urged the legislature to delay the passage of this recent surveillance law, which was not consistent with best practices or European Union law.  It’s why we have continued to press for a full investigation into the leaks about surveillance of the Georgian Orthodox church and diplomats and others that happened last fall.  This continues to be an area of concern for all of us looking for a free and open society in Georgia, where people don’t have to be worried about the kind of surveillance that happens in some neighboring countries.  Media freedom is something that is important to the United States.  I just met earlier this week with representatives from the Charter of Journalistic Ethics, to talk about some of the challenges to media freedom in Georgia.  It was a very good exchange, but also a sobering account of the kind of pressures that journalists in Georgia are under, including a pattern of attacks and harassments that work against the interests of the citizens of Georgia.  The only way the citizens of Georgia, the people of Georgia are going to be able to get accurate news is if the journalists can go out and cover stories without worrying about being attacked, harassed, or intimidated.  Media freedom is a very important priority for the U.S. Embassy, and it should be an important priority for any democracy. Thank you.

Ambassador Degnan:  I know there’s a lot of tension in Georgia.  Sometimes people get emotional in this environment.  For 30 years, the United States has worked with Georgia across the board as one of the strongest supporters- if not the strongest supporter of Georgia’s sovereignty and territorial integrity.  We have worked with whichever party was in power over the years to strengthen Georgia’s security, to strengthen the Georgian defense forces, the border police, the Coast Guard, the public health, education, to help diversify the economy.  We have supported Georgia throughout the years in the most important priority for the Georgian people – which is to become a full, secure, stable, democratic country that’s a part of the Euro-Atlantic family of nations.  It’s commendable when any member of Parliament is concerned about his or her constituency.  That’s important.  I’m sure the constituencies of these MPs appreciate the interest being shown for their concerns.

The vast majority of Georgians have their top priority as joining the European Union.  I think they would like to see the passion and the energy go into working inclusively with the opposition, civil society, and stakeholders to address these 12 recommendations from the European Council that are the ticket for Georgia getting its candidate status.  That is the priority for the Georgian people.

I expect this would be the priority for their members of Parliament.  My role as the U.S. ambassador is to discuss U.S. policy.  The United States is working very hard to prevent President Putin’s unprovoked war against Ukraine from expanding to include Georgia or any other country.  We are working every day to try and stop this war as soon as possible.  Putin launched this war and Putin can stop it today.  What the United States is working for is restoring peace and stability, so we can get on with the kind of work so important for Georgia’s future in the European Union, in NATO, in Euro-Atlantic family of nations.  That is again, all the areas we’ve been working on so closely in such a good partnership – whatever party was in power – with Georgia over the past 30 years.  Thank you.