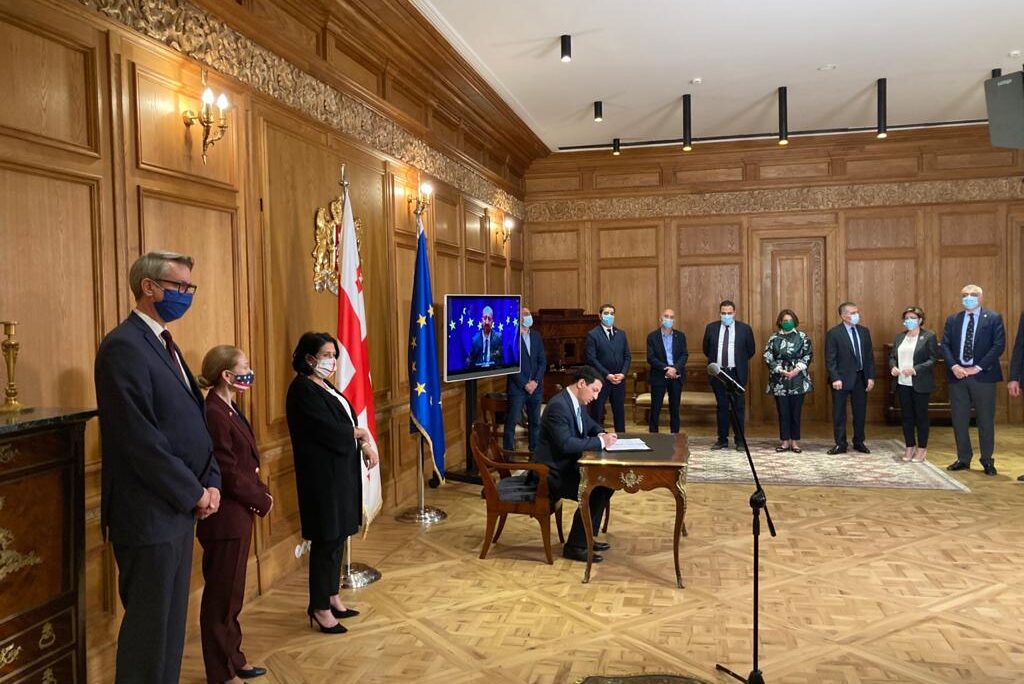 ” I am very pleased to be with all of you this evening after six long, hard months of work. As I have said many times before, and I will say again tonight: the United States is committed to Georgia’s success as a stable, prosperous democracy. You all have shown real political courage throughout this long, difficult process, and real leadership tonight in agreeing to sign President Michel’s compromise agreement. I am really honored to be here with you for this important moment in Georgia’s democratic development, and on the path forward toward Euro-Atlantic aspirations and integration. It is really my honor to be here, and on behalf of the United States, I just want to say congratulations to you and my sincere thanks.”

I am so proud of Georgia tonight, so proud of the political leaders who worked very hard over the last six months. This has been difficult. It has been a long process, but they have overcome their differences to reach a compromise. We all owe President Michel gratitude for stepping in to mediate this process, and also President Zourabichvili for hosting this ceremony tonight, and for the very important role she has played to reach an agreement here. This agreement remains open for individual MPs to sign, and it will be available starting tomorrow morning.  We want this to be as broad-based an agreement as it can be to show that Georgia has taken this important step forward for its democratic future–and for its future in the Euro-Atlantic family. That is why I am so proud to be the American Ambassador because the United States wants to see Georgia succeed, and is committed to Georgia’s success as a stable, prosperous democracy. Gilostsavt and didi madloba to all the people of Georgia for their patience while this process has unfolded. It is a real success for Georgia. This is an important step forward–Nela, Nela. I am confident that this country is going to continue to move forward now that it has a full, functioning parliament, and I hope that all parties that were elected in October will come into the parliament and strengthen Georgia’s institutions. That is the way Georgia’s democracy is going to continue to grow stronger and play the role that we see Georgia playing in this region.