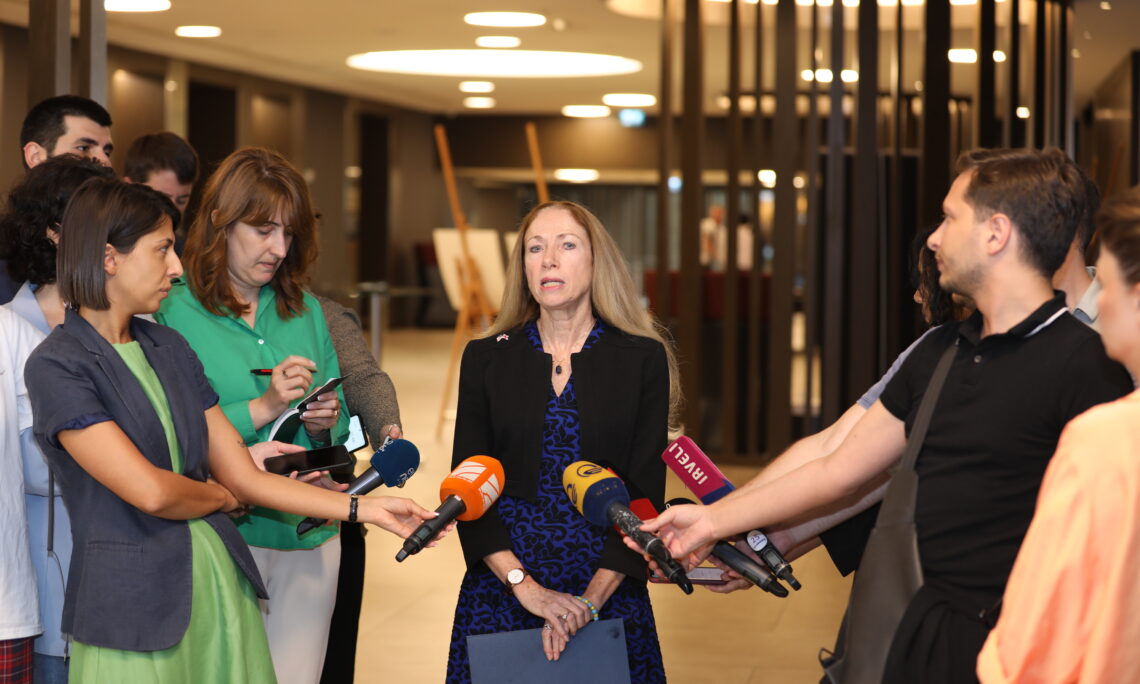 Ambassador Degnan: I’m very pleased to be here today for the LGBTQI+ Pride Week Regional Conference to discuss the issues and challenges facing the LGBTQI+ community in Georgia and in the region. The Biden administration has placed human rights at the centerpiece of our foreign policy. This is because we deeply believe that all human beings have the right to be treated with dignity and respect and to live without fear, no matter who they are or who they love. This does not come at the expense of the majority; it does not undermine or interfere with or detract from the rights of anyone else, their culture or traditions. This is simply a human right that is enshrined in Georgia’s constitution, as well as the United States’ constitution, as well as the Universal Convention of Human Rights. This is such a basic principle: that human beings—all human beings—should be treated with dignity and respect and tolerance.

Question about the NATO Summit

Ambassador Degnan: Georgia is a very strong partner of NATO, and I think that’s shown by the high-level delegation that attended the Madrid summit. The summit was a display of how strong the NATO Alliance’s unity is in the face of Russia’s brutal war against Ukraine. It was a reaffirmation of the purpose of the NATO Alliance, which is a defensive Alliance that stands to promote peace and stability in Europe and beyond. I think that the summit was also an opportunity for Georgia to regalvanize around the steps that Georgia needs to make. Many of them are the very same kinds of reforms that are being called for in Georgia’s European Union candidate status. So, work that’s done to promote the European Union membership candidate status will also benefit Georgia’s NATO membership process, because these are the same kinds of political and democratic reforms. It’s important to remember: NATO is a political-military Alliance. That means it has military standards that must be met as well as political standards that must be met. And the United States and its allies stand ready to assist Georgia to make progress toward that membership.

While we’re on the subject of defense, I’d like to respond to this insidious narrative that seems to continue. It seems straight out of an FSB disinformation book, but let me be very clear. The United States is not trying to drag Georgia into Russia’s war against Ukraine. The United States does not want to see this war expand in any way. The United States is doing everything we can to stop this war as soon as possible. It was Putin who launched this aggressive and brutal war against Ukraine, and it is Putin who can stop this war.
It’s the United States, Europe, the friends of Georgia, who over the past 30 years, have done everything we can to help Georgia along its path to Euro-Atlantic integration. We will continue to do that. I think it’s really important for Georgians to remember that it is Russia that occupies 20% of your territory. It is Russia that tried to kill your language. It’s Russia that desecrated your churches by using them as stables for animals. If there’s any question about what Russia’s friendship for Georgia means, all you have to do is look at the Administrative Boundary Line to see your friends are in the United States and in Europe. And that is the path to peace, stability, and prosperity for Georgia.