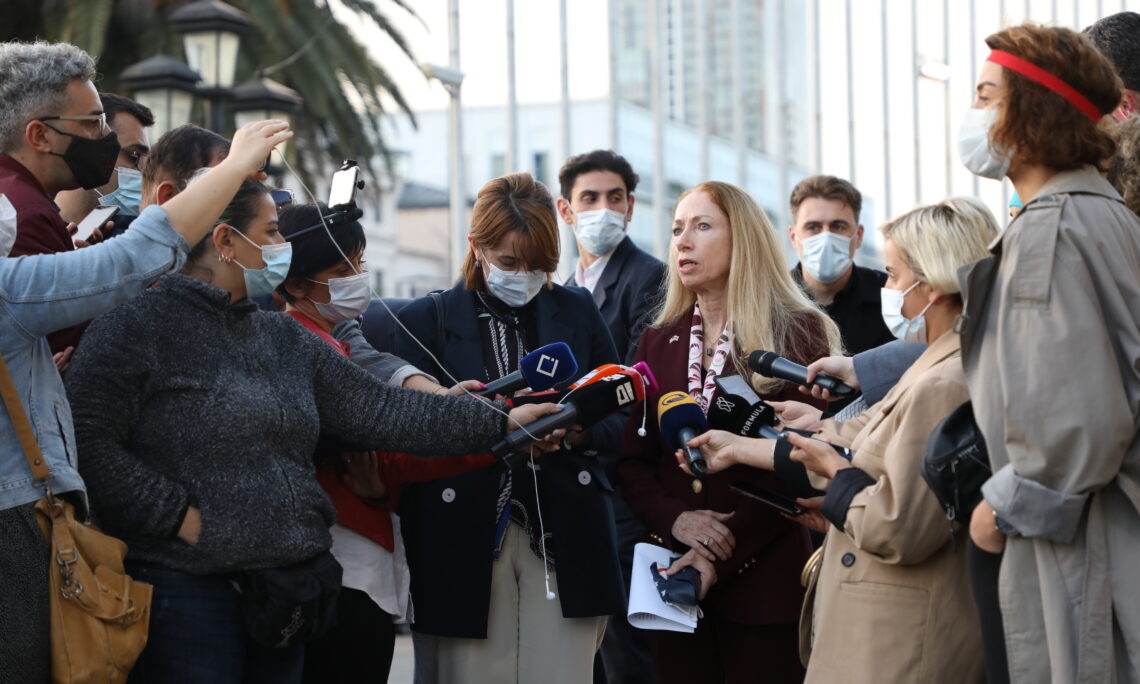 Ambassador Degnan: We are very, very pleased and I’m honored to welcome the crews of the USS Porter, the United States Navy destroyer, and the USS Mount Whitney, which is the United States Navy flagship for the Sixth Fleet. Mount Whitney was here in 2008 September, actually in Poti, bringing much-needed humanitarian assistance to Georgia following Russia’s invasion. This is a concrete example of the kind of security and defense cooperation that Georgia and the United States have built over the years. This is not just an opportunity to improve interoperability and joint coordination, it is a sign of our commitment to this vitally important geographic region and our unwavering support for Georgia’s sovereignty and territorial integrity. Vessels like this allow the United States Navy to have over-the-horizon projection of force when we need it and wherever we need it and I think it’s very significant that USS Mount Whitney and USS Porter came here to Batumi. Our sailors from the two ships have had a chance to enjoy a little bit of Georgian hospitality here in Batumi. They’ve been out doing some community outreach as well. They’ve had a chance to meet with Georgia’s diverse religious faiths while they were here and of course experience some of the wonderful Georgian hospitality. I want to thank Batumi city and of course the Ajara region for the generous support and hospitality they’ve afforded the ships. It’s not easy to host a big vessel, two big vessels like this, and they did it with such flexibility and generosity.

Ambassador Degnan: The United States continues to follow very closely the imprisonment and health condition of Mr. Saakashvili and we remain concerned for his well-being. In light of the medical team’s recent assessment that he is at high risk and needs urgent treatment, as well as the Public Defender’s statement today that Gldani prison hospital #18 is not sufficient, we urge the government to ensure that Mr. Saakshvili immediately is provided with medical care that he needs at a fully equipped medical facility. We also urge Mr. Saakashvili to please accept the recommendations of his doctors and accept the medical care they say he needs. This is obviously a very sensitive and emotional situation but right now the priority needs to be on addressing Mr. Saakshvili’s mental health and physical well-being. It’s our strong recommendation to the government to ensure that he is provided with the medical and mental healthcare that he needs. He should be treated fairly and with dignity in accordance with Georgian law and international standards. In any country, the government has a responsibility to protect inmates from abuse, including mental abuse, as well as providing for their medical well-being and their safety. So, again we urge the government to please ensure that Mr. Saakshvili is immediately provided with the medical and mental healthcare that he needs in a fully equipped medical facility.

Ambassador Degnan: As I said a minute ago, Mr. Saakashvili’s well-being is something that we’ve been monitoring very closely and we continue to engage with Public Defender’s Office, with others, with political leaders regarding his condition. As I said, right now the priority needs to be on addressing his mental and physical health. That is why we are urging the government to ensure that he is provided with the medical and mental healthcare that he needs at a fully equipped medical facility. Thank you.

Question about how to diffuse the situation

Ambassador Degnan: It’s a very important question. Everyone has a role to play in diffusing the polarization that has paralyzed this country for far too long. The ruling party has a special role to play to ensure that it is governing inclusively, to ensure that the media and the civil society can do their jobs safely, and they should do their jobs responsibly as well. And of course, all the political parties need to work together. We saw that they can, they worked together on very important electoral reform that, in a small way, did make the last elections a little bit better, there were still many violations and that’s an indication that there is more work to be done, but that work needs to be done with the parties working together for the interest of their constituents, for Georgia’s interest. And I do think if the leaders of this country put the country’s interests, their people’s interests first, that will be the start to ending polarization. Thank you.