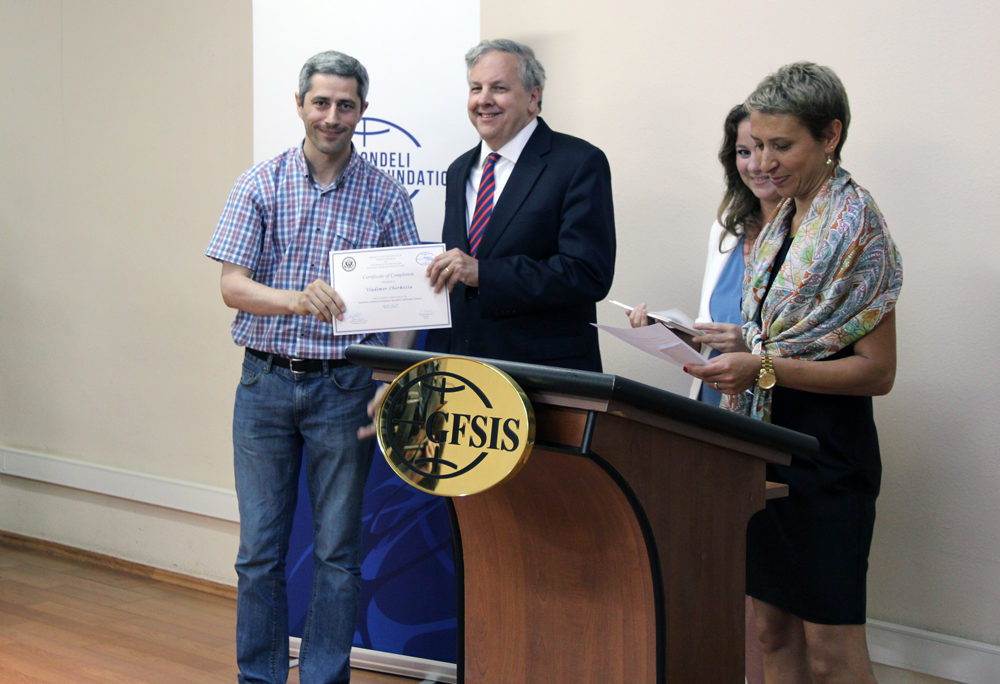 On July 26, the Ambassador participated in the graduation ceremony of the Georgian Foundation for Strategic and International Studies (GFSIS) National Security and Public Policy Training Program. In his remarks, Ambassador Kelly emphasized the training program’s importance in furthering Georgia’s progress in its efforts toward Euro-Atlantic integration.  He also discussed how the U.S. government has supported GFSIS since 2001 to improve public-policy decision-making in Georgia through research and analysis, training of policymakers and policy analysts, and education about the strategic issues facing Georgia.

Ambassador Kelly’s Q&A with reporters at the event

Question on the event

Ambassador Kelly: “I’m very pleased and honored to participate in this ceremony of giving certificates to the recent group of graduates and welcome next year’s. The embassy has supported this program for a long time, I think around fifteen years, and this is a part of our overall investment in Georgia’s future as a Euro-Atlantic democracy.”

Ambassador Kelly: “Our views are very well known, that we are very much focused, the government is very much focused on the elections in October. We think that the most important thing in this pre-electoral environment is that we have a level playing field for all of the various parties. A critical part of that is access of all voices, of all parties competing in the election, to the media. That’s why it is so important that Rustavi-2 remain on the air in this pre-electoral period.”

Ambassador Kelly: “I think, as I said, free media is an important pillar of democracy, but just as important is an independent judiciary that is able to deliberate free of political control, free of intimidation. I, of course, as, I think, the government, am very concerned about these charges of intimidation. I’m encouraged that the Prime Minister has taken these charges seriously. I note that he and his government, including the prosecutor’s office, is encouraging everyone involved to cooperate with the prosecutor’s office. I welcome this, and hope that there will be a thorough investigation and that the principle of an independent judiciary free of political control and intimidation is upheld.”

Ambassador Kelly: “Accusations of a connection between the Georgian government, or Georgian cabinet members and the Kortskheli incident is something that I really can’t address. I will say that what happened in Kortskheli is really unacceptable, that political violence in a political campaign is something that needs to be condemned, and, of course, investigated. We ourselves in the United States have a very open electoral campaign with some very different positions, but whenever there has been any kind of incident of any violence at the campaigns of Mr. Trump or Mrs. Clinton, it is very quickly investigated. I know that the government has started an investigation, and we hope that that investigation continues in a thorough manner.”

Question on a fair, democratic election

Ambassador Kelly: “I think that there are two points here. One is, as you say, it’s important that the incident be investigated, and the Prime Minister has said that it will be investigated. I think the other point on this is how do we go into elections — what lessons do we learn from this incident. I am very much encouraged that the parties have gotten together and developed a code of conduct and that all the leaders of the parties have condemned this kind of violence during an election campaign.”