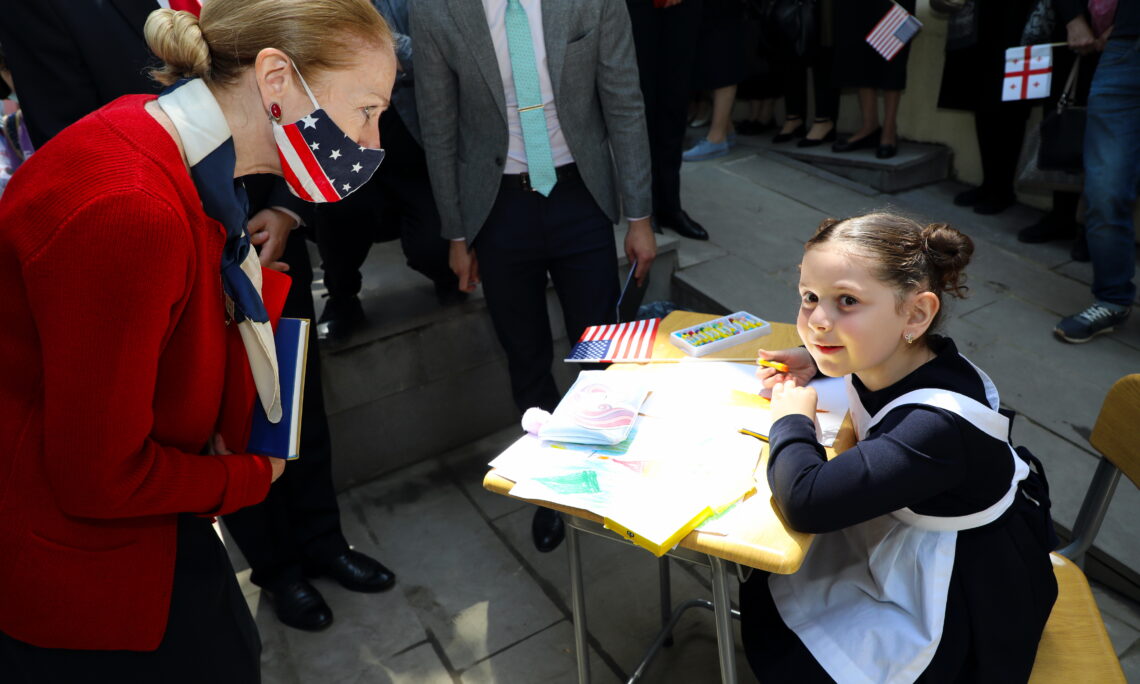 More than 130 years ago, Ilia Chavchavadze wrote: “If God wills the United States to fulfill its wish for the sake of humankind, it would be a great example for Europe.” Today Ambassador Degnan visited the city where Chavchavadze was born and told students at Kvareli School #1 that today it is Georgia’s wish for a democratic future that is inspiring the world.

The Ambassador joined Mayor Rostom Sesiashvili and Governor Irakli Shioshvili to open the new Kvareli American Shelf in partnership with the Kvareli EuroClub. The community will find books, games and activities at the American Shelf to develop the skills Georgia needs to continue its democratic development, economic growth, and Western integration. The U.S. Embassy also supports an American Shelf in Gori and by the end of the summer plans to open American Shelves in three more Georgian communities.

Q-n about the event: Opening of the American Shelf in Kvareli

Ambassador Degnan:  I have to give a huge thank you to the city of Kvareli for giving such a warm welcome to me and to my entire team.  We are thrilled to be able to open an American shelf here at Kvareli school number 1 with the support of the city and the director and the whole student body.  We have been able to open in an area where people can learn more about American culture and history and study in the United States.  This is a very big day for the U.S. Embassy and our partnership with Kvareli.

Q-n about the Charles Michel document

Ambassador Degnan: It was a very important step that Mr. Melia was released from prison in terms of accomplishing and implementing the April 19th agreement.  That was a core part of the agreement and now it is important to encourage all of the parties and all the members of parliament to enter Parliament and continue the hard work to finish implementing this agreement.  We were very encouraged to see the parties negotiating over the weekend in Kachreti.  I understand they are going to continue those negotiations on electoral reform.  This is a central element of the April 19th agreement, ensuring that the October local elections will run smoothly and will have the full confidence of voters.

Q-n about the Ambassador’s position on some of the opposition’s decision not to enter the parliament, if UNM rejects its mandates; and if the Ambassador thinks we are witnessing political persecution as in the court cases of Ugulava, Gvaramia, Khazaradze-Japaridze, and Melia.  As Irakli Kobakhidze mentioned, Melia has been released, but it does not mean his prosecution is exhausted;

Ambassador Degnan: Your question is a very important one and it is one reason why it is the central element of the April 29 agreement.  That was negotiated by the nine parties regarding judicial reform.  I think the judicial process needs to have the full confidence of the public and of the political parties.    And, that is why we encourage all of the parties, and all of the members of the parliament to come into parliament.  This has been our consistent message since the parliamentary elections.  We are convinced that that is the right place to do this hard work to improve the judicial system, the electoral system and to ensure that Georgians can have confidence in the outcomes of the elections and the decisions of their courts.

Q-n about the possible situation if the UNM refuses to enter parliament, plus the ongoing situation in Israel

Ambassador Degnan: I think I have addressed the question on the parliament several times. Our consistent message has been that we encourage all of the parties that have been elected by the people of Georgia to come into parliament and do the hard work that is going to be required to have a fully functioning multiparty parliament.  That is what Georgians wanted, that is what they chose in October, and we encourage all the parties to get in there and get to work.  On the very important question that you asked about the situation in Israel: it is a very serious situation.  President Biden and his senior team are very much engaged in this, they are watching the situation closely.  There have been over 20  high-level calls back and forth trying to deescalate the situation.  I think we all know that dialogue is the only solution, and the parties need to keep talking.