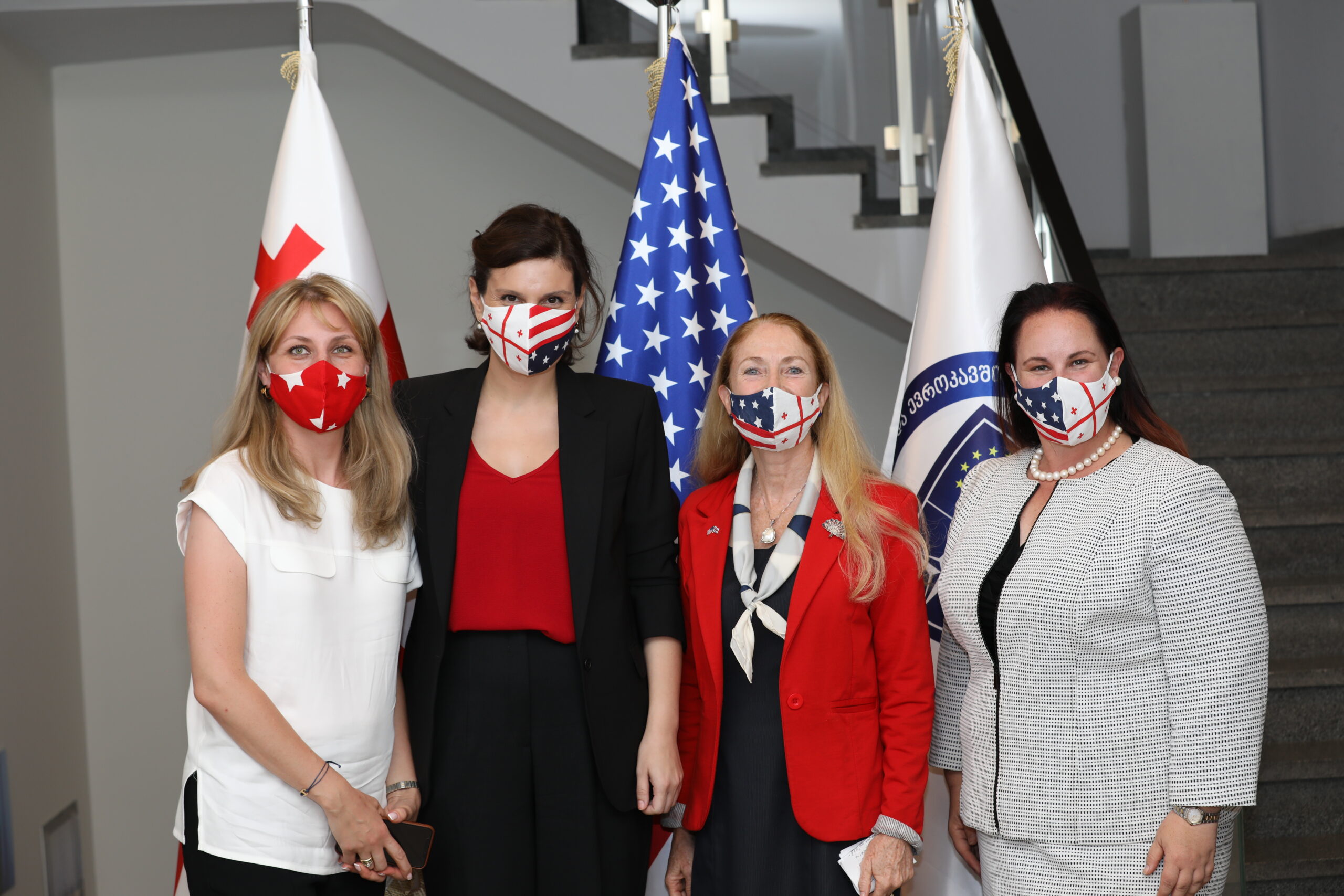 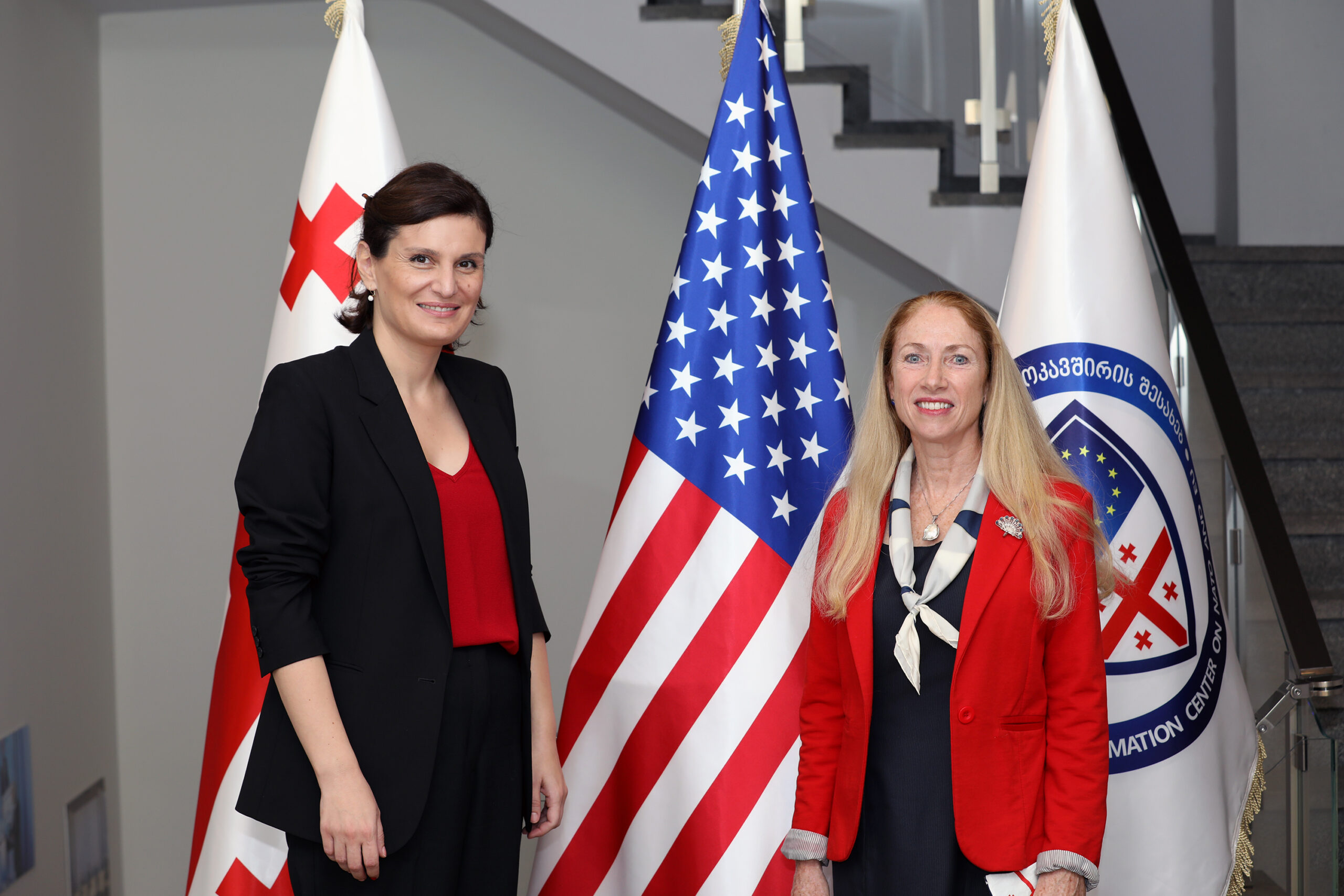 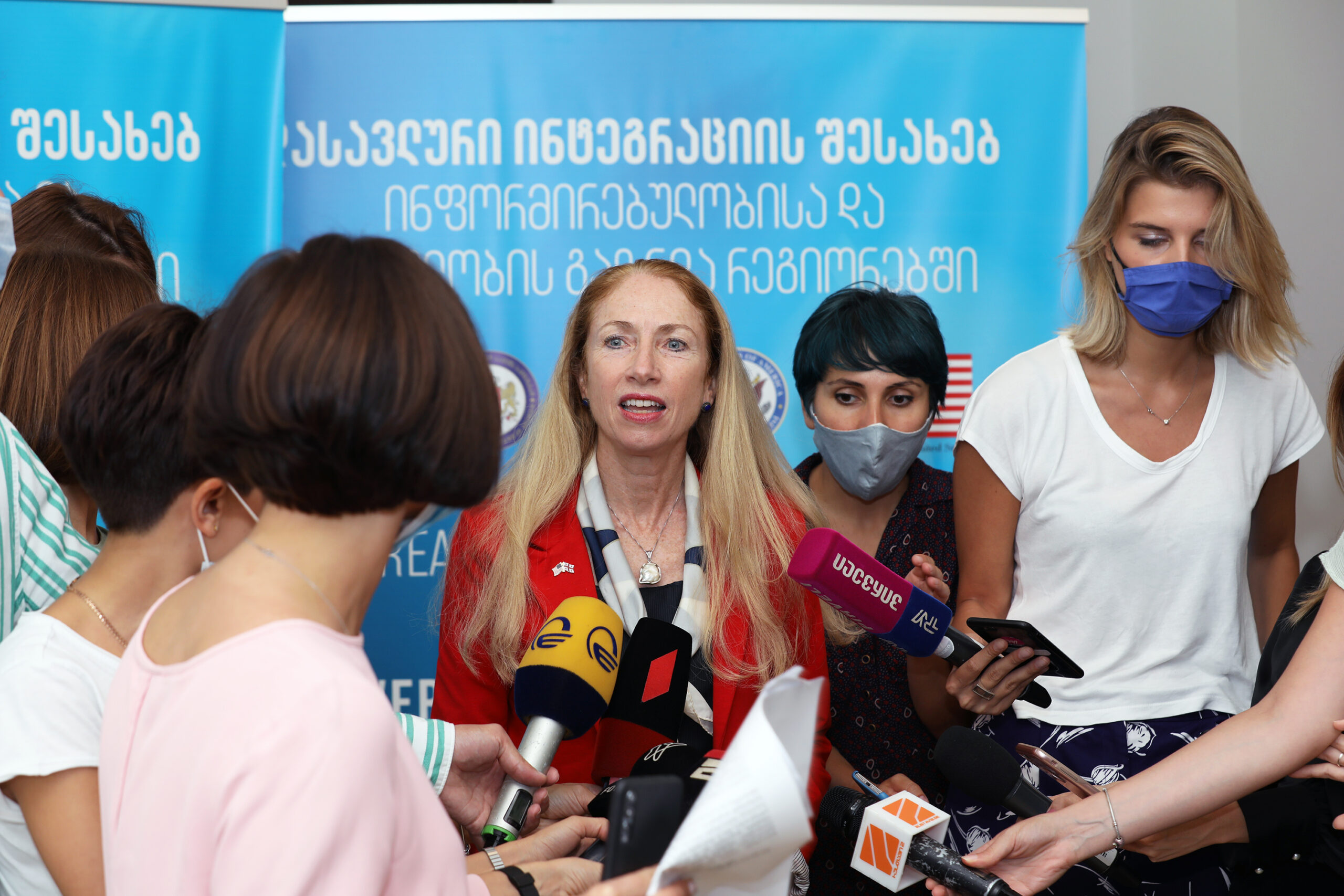 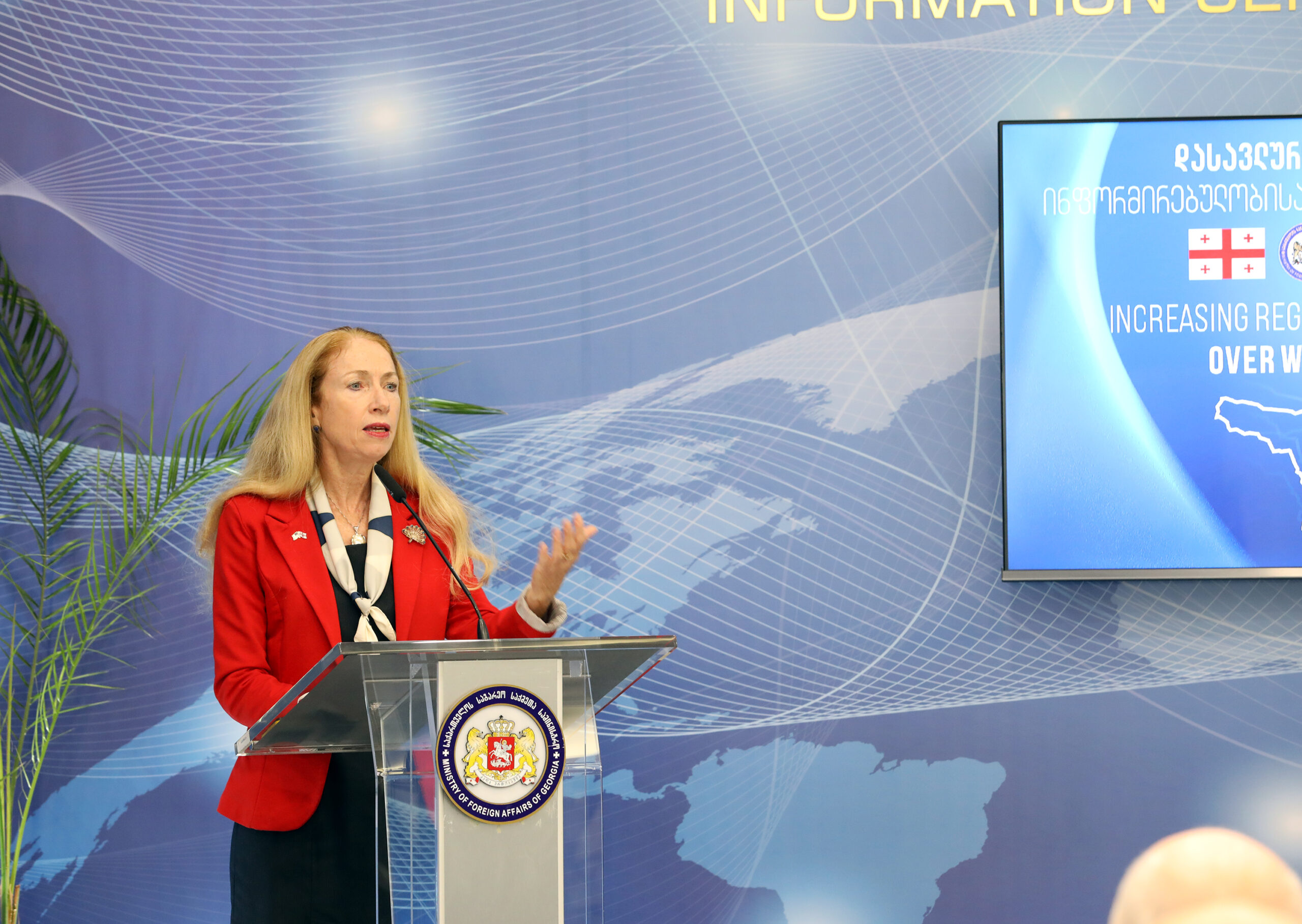 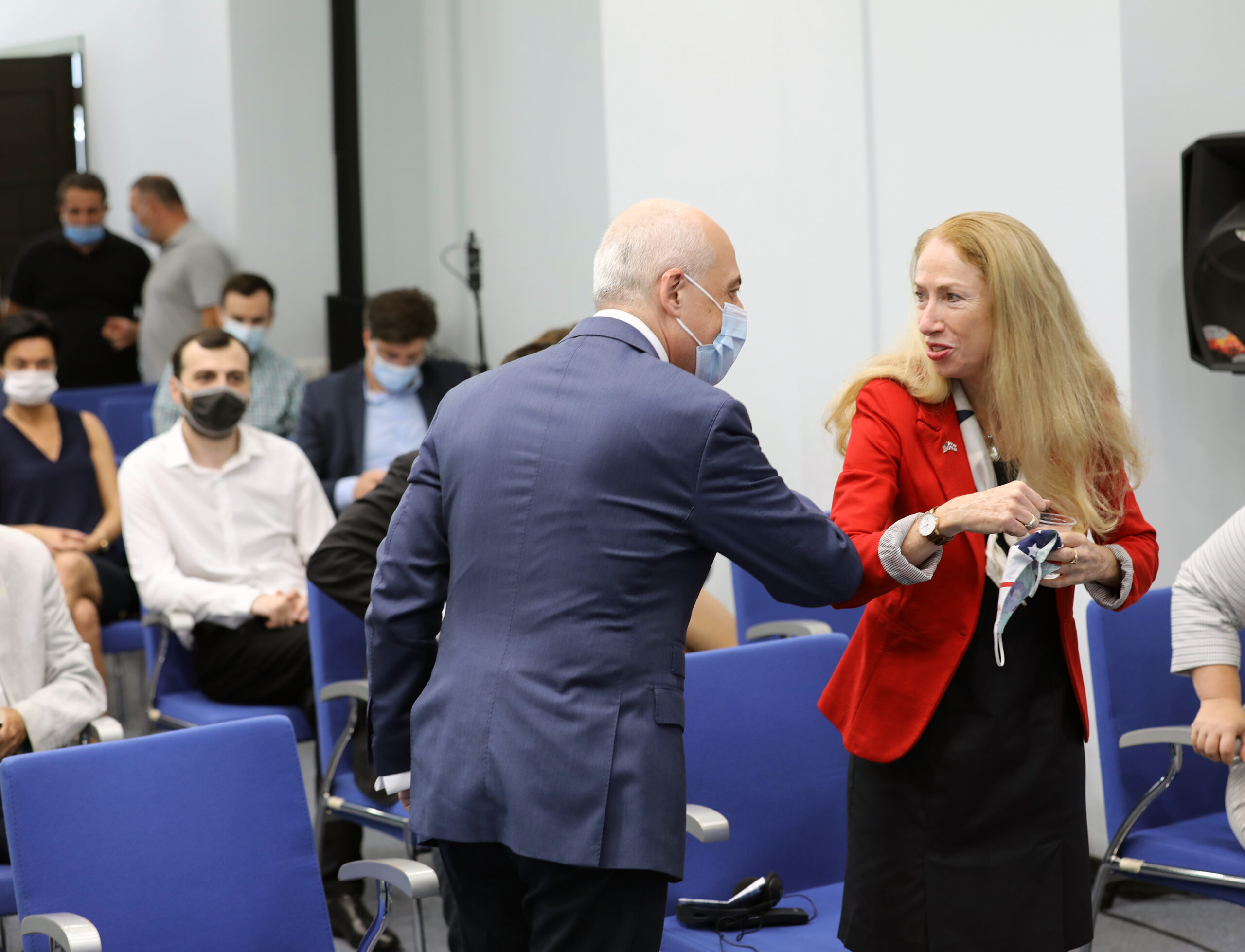 Today, Ambassador Kelly C. Degnan joined Minister of Foreign Affairs of Georgia David Zalkaliani to announce the U.S. Embassy and the InformationCenter on NATO and the EU will continue their partnership for two more years to provide information to Georgians at 13 regional centers about Georgia’s Euro-Atlantic integration.  Georgia’s western integration process contributes to the growth of foreign investments, reduction of unemployment, and improvement of the quality of life of every citizen of Georgia.  The U.S. Embassy’s Public Affairs Section also provides assistance to complementary projects supporting strategic communications, promoting resilience towards anti-western narratives, and supporting conferences on the Black Sea security and other topics.

Ambassador Kelly Degnan: This is another great example of the cooperation on advancing Georgia’s European and Euro-Atlantic integration. This is a $750,000 initiative that the United States is conducting with the Ministry of Foreign Affairs and with the Information Center on NATO and European Union. The idea of this is to get accurate, unbiased, objective information out to communities throughout Georgia about the benefits of the membership process, the benefits and the requirements of the membership process for the European Union and NATO. With this second phase of the initiative, the Information Center will be able to reach a broader segment of Georgia, including civil society, including municipal leaders, religious leaders, and students throughout the country to better explain and answer questions about what it means and why its important for NATO for Georgia to continue on its European and Euro-Atlantic integration. Georgians have chosen this path because they know that integration with the west is going to bring greater security, greater stability, economic growth and a stronger democracy. Thank you.

Q-n about the cyberattack on Ministry of Health and Lugar Center computer system, how would you assess the attack?

Ambassador Kelly Degnan: I believe the Ministry of Internal Affairs is conducting an investigation, and it is important to see the results of that investigation. The attack was against Ministry, and that includes the Lugar Center as well as the Labor and IDP’s and Health Ministry, so we need a little bit more information. But what is clear is that it is a reminder that malign actors like Russia and others are constantly looking for opportunities to attack and create instability, create confusion, and this is a reason why Georgia needs to continue the good work that is underway to strengthen its cybersecurity, to raise the level of its cyber hygiene to the highest standards, and the United States will continue to support Georgia’s efforts to do that.

Q-n about NDI’s decision on not sending the election monitors who will observe the elections in person, but rather sending the long-term monitors. This gives opposition fears that the ruling party will use this opportunity and rig the elections. What are international partners going to do to prevent this? Also, Rep. Adam Kinzinger Tweeted about other countries meddling into Georgia’s elections, how realistic is the interference?

Ambassador Kelly Degnan: On the first question, on NDI, I think NDI has made it very clear that they are going to remain strongly engaged in this election, as they have over the 25 years of involvement with Georgia. These are professionals who know Georgia well, who have been observers and been involved in almost all of Georgia’s elections over the last 25 years. They have developed a very robust approach to covering this election in the time of COVID that protects the safety and health of their personnel. As they have made clear, they are going to be working very closely with teams who are on the ground, they are going to be conducting their same kind of assessment surveys, new ways, using new technology. So, I do not expect there will be any decline in the intensity of the engagement by NDI or any of the observer groups. Georgia is very fortunate to have experienced elections observers here already that can be deployed. The United States, as usual, will be deploying teams on election day, as are all other missions. So, again, I think there will be very robust and engaged coverage and monitoring on behalf of international observers. Regarding Representative Kinzinger’s statement, I think this is a sign again that Representative Kinzinger and many others in Washington are following events in Georgia very closely. They are very interested and concerned that this election go well. I could not agree with him more regarding the irresponsible nature of trying to bring Turkey into this. Turkey is an important friend and partner to Georgia, one of Georgia’s top export markets, and a strong supporter of Georgia in the NATO Alliance, and that is an important friendship and partnership for Georgia.

Q-n about the recent resolution adopted by the UN General Assembly, how important is the resolution and how does it help in Russia’s deterrence?

Ambassador Kelly Degnan: I congratulate Georgia on the UN General Assembly’s adoption of this resolution yesterday. To me, it is a sign of continuing international interest in this case and concern about the status and humanitarian situation for IDPs. 84 countries supported this resolution this year, which is more than ever before, which to me says that there is movement on this, there is a growing recognition that something needs to be done to assist and improve the humanitarian situation there. Russia needs to withdraw its forces from the area and it needs to comply with its obligations under the 2008 treaty. It needs to reverse its recognition of South Ossetia and Abkhazia. That would be a good start to improving the situation for the thousands of people who continue to live in an unstable environment.

Q-n about whether the pre-election reformed carried out by the government prior to these elections are enough to conduct free and fair elections?

Ambassador Kelly Degnan: The election reforms that have been adopted, including the one yesterday, are very important steps forward and they address many of the recommendations raised by ODIHR based on problems seen in previous elections. So, it is progress, but as we have said before, it is only a piece of paper if there is not determined enforcement and implementation. It has to be clear that there is a change in the approach to conducting elections, and that is what, I think, everyone is going to be watching very carefully for October.

Ambassador Kelly Degnan: I continue to feel deeply for this family. This is the greatest tragedy that certainly parents could ever experience, to lose a child, and I have been following the case and can imagine that they are still very much in pain and grieving over this. We tried to make clear that the FBI is a law enforcement organization with jurisdiction over the U.S. and cases involving U.S. citizens or U.S. interests. The FBI’s jurisdiction is very limited outside of the United States and they do not have jurisdiction to conduct an investigation in Georgia or outside of the United States.