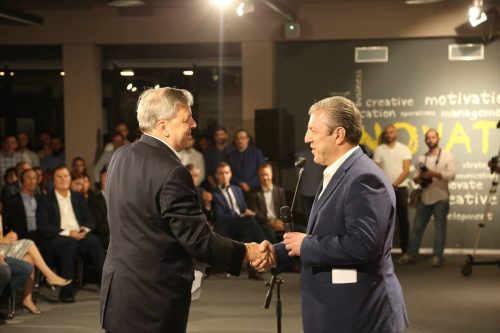 Ambassador Kelly and Prime Minister Kvirikashvili at Start Up Georgia

Entrepreneurs improve their lives and their communities through good ideas, hard work, and a little bit of luck. Start Up Georgia is a program that helps to turn these ideas into reality. We‘d like to congratulate the winners and wish them luck!

You can learn more about the program here: gita.gov.ge

Ambassador Kelly’s Comments to the Media after the event

Well you know I was very pleased to participate in this event tonight because I think that what it shows is that the twenty-first century world is a world without borders.  The internet has no borders and it is really a shame—and shameful—that in this modern era that new borders are being put up, barbed wire, separation between peoples—we do not recognize these borders and we don’t recognize the border closings, we don’t recognize closing of borders that shouldn’t even be there.  I think our views on this are pretty clear.

Q: Several days ago Russia started military exercises in the occupation areas.  How would you comment on that?

A: Well I think that first of all we don’t believe the Russian forces should be there at all, that Russia should abide by the cease-fire agreement of 2008 which called for the withdraw of all forces to their original lines.  Having said that, we are of course concerned by exercises of this size and I think that of course anytime you have military exercises it’s important to have transparency and predictability.  And I would hope that these exercises would be marked by such transparency and bilateral communication.