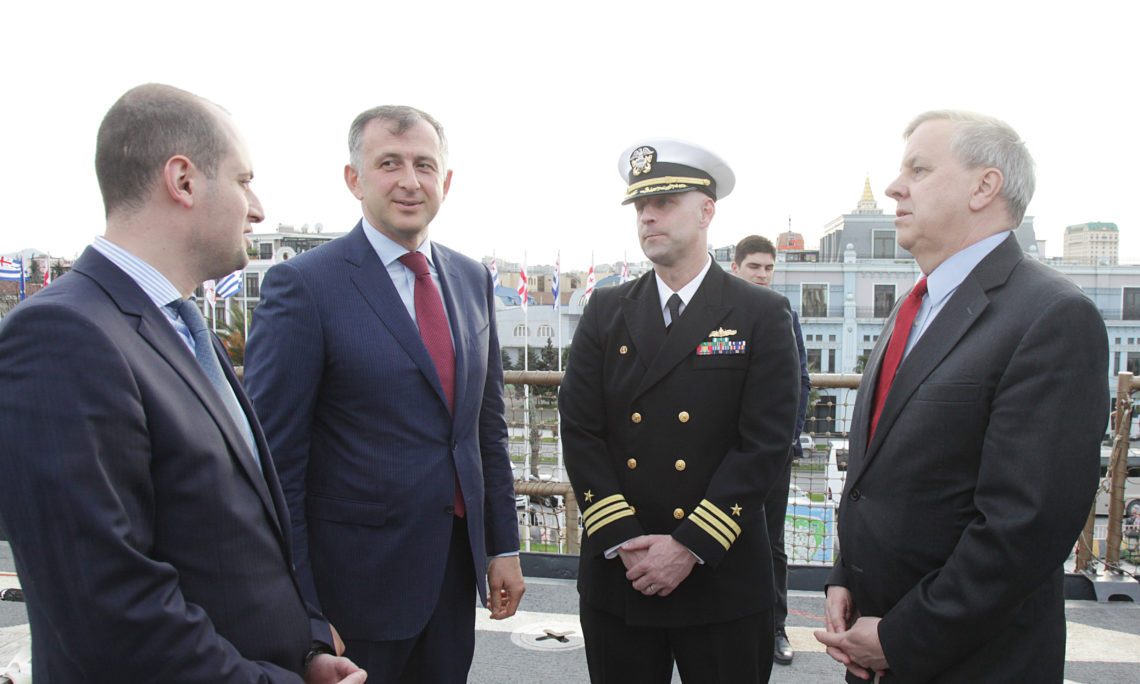 Ambassador Ian Kelly on board of USS Oak Hill

Ambassador Kelly:  I think this is yet another example of the United States’ support of Georgia’s sovereignty and independence.  This is the largest ship that has come to Batumi.  This ship is a great symbol of the ability of the United States to project power all over the globe.  It is not just the United States Navy, it is also an expeditionary unit of the U. S. Marines.  It has been a real honor for me — I am sorry to say it is my last week in Georgia — to participate in this ship visit.

Q-n about President Margvelashvili’s appeal to the United States authorities to initiate an act of support for Georgia during his visit to United States.

Ambassador Kelly:  I think the President had a very successful visit to Washington.  He had excellent visits on Capitol Hill with Congress, he had excellent meetings with the think-tank community and, of course, he had meetings at the White House with the National Security Advisor, Mr. McMaster.  I think there is tremendous bipartisan support for Georgia in the United States Congress.  Of course, I represent the President and the executive branch but, of course, we would be very supportive of any bipartisan resolution to support Georgia.

Ambassador Kelly:  On the first question:  we do not recognize the authority of the Russian Federation on sovereign Georgian territory and of course, Abkhazia and South Ossetia are part of Georgia.  Obviously we would not, in any way, support or sanction the Russian Federation – without the consent of the Government of Georgia – holding any kind of elections on the Georgian territory.  On the second issue, I had a very good meeting with the Speaker last week, and also with the senior representatives of the pro-Western opposition.  The essential issue, I think, in South Ossetia and Abkhazia is the lack of accountability for gross human rights violations.  We in America, of course, have our own mechanisms and I told the Speaker that we would be happy to put the Georgian Parliament in touch with the appropriate people in the U.S. Congress so we could share our experiences about how we impose costs on human rights violators not only in Russia but all over the world.

Q-n about the recent developments in Russia-Georgia relations in light of the growing international support for Georgia.

Ambassador Kelly:  I think we have been very supportive of this government’s pragmatic approach to Russia in having regular, structured conversations and dialogue.  I think that we acknowledge that there is quite a bit of frustration among the Georgian public about the lack of progress in the Geneva international discussions and we have expressed our support for the Government’s desire to have a more productive set of talks in Geneva.  We look forward to hearing more from the Georgian Government about how the United States can be supportive.