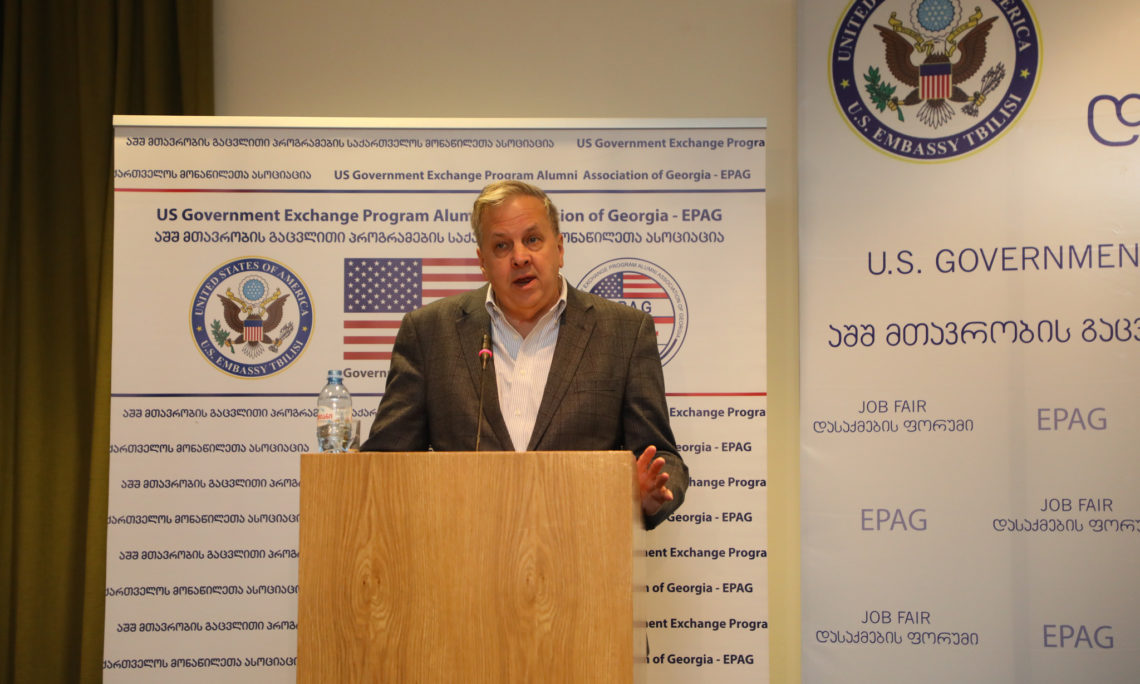 Ambassador Kelly during his Remarks at the EPAG Job Fair. Photo: State Dept

Ambassador Kelly:  First of all, I want to thank David and the Alumni Association for inviting me here. It is a real pleasure for me to be here. This is really all about connecting Georgia’s best and brightest, Georgia’s young people, with employers who can provide them with opportunities and together build a better future for Georgia. And of course, this is the last day of Global Entrepreneurship Week, and this is part of our overall effort to support Georgia’s future.

Ambassador Kelly:‎  I have not seen these remarks by the former Secretary General for NATO but obviously these remarks are, as you have told me, squarely in line with the U.S. position. The U.S. position has been consistent since the Bucharest Summit declaration. We believe that Georgia will become a member of NATO, and as Vice President Pence said when he was here in August, we will stand with Georgia until that time, until it is able to join NATO. Which means, of course, that all the members of NATO have joint consensus, but the U.S. has always been supportive Georgia’s NATO membership.

Q-n about the continuation of borderisation from the Russian side

Ambassador Kelly:  I made a comment on this yesterday. We see these activities as a deeply retrograde, tremendous step backwards. We obviously see any attempts of borderization as illegal for the simple reason that we don’t recognize this is a border, so how could we recognize any fences or other kinds of obstacles between the people of the South Ossetia region and the rest of Georgia.

Ambassador Kelly:  I am not gonna comment on any specific criticisms from the Georgian government but I will say that in general United States is very supportive of the office of Public Defender, we are supportive of  Mr. Nanuashvili, did I get that name right? And this is a very important part of democracy: that governments are granted certain powers and it is important that governments be held accountable for their use of power. It is important to have a dialogue between government and its citizenry, and the Public Defender’s office brings to the attention of government some of the concerns of the citizenry. So, we are very supportive of this office and we hope whoever replaces Mr. Nanuashvili is also independent and has integrity.