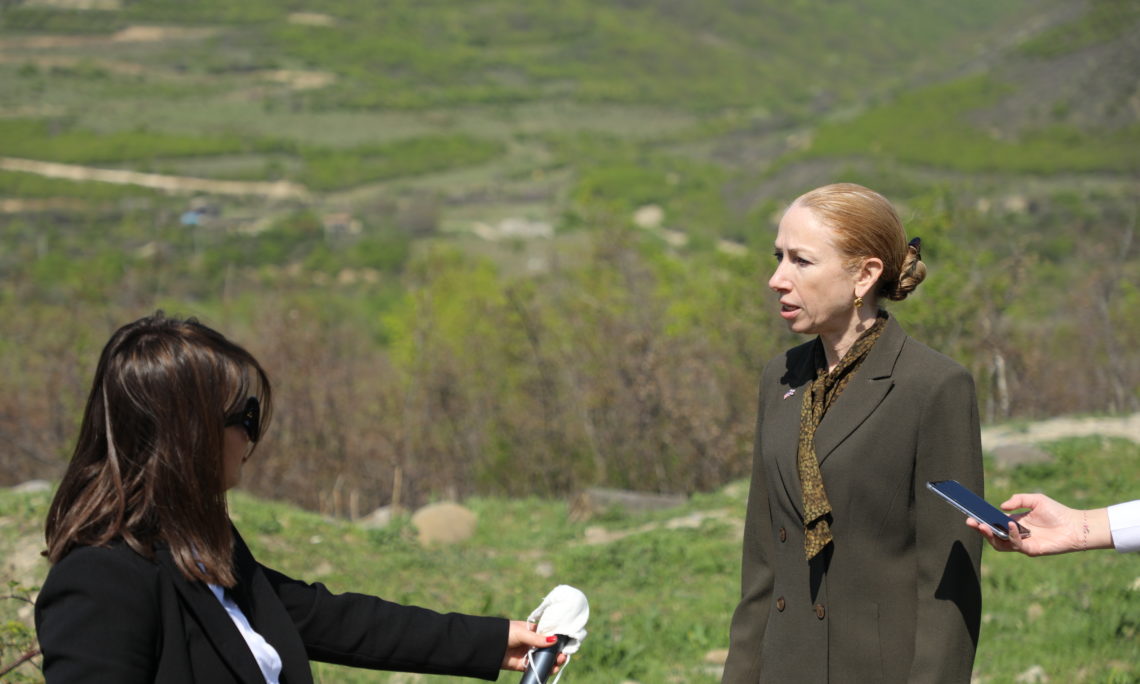 Ambassador Kelly Degnan during the interview at the Administrative Boundary Line, near Odzisi. Photo: State Dept

Question about the visit
Ambassador Kelly Degnan: This is my first opportunity to come up to the occupation line and I really appreciate the chance to see this very important region of Georgia.  I have to say, seeing it myself, I see more the tragedy of separating people who used to live together in these beautiful villages. It’s really heartbreaking.
Obviously, the United States strongly supports Georgia’s sovereignty and territorial integrity, and when I see what is being built on the other side of this occupation line, it makes me even more convinced that Russia needs to fulfill its obligations under the 2008 ceasefire agreement and withdraw its forces and comply with its obligations under the agreement that it signed, it agreed to. I think the recent borderization issues are very concerning.  It’s one of the reasons I wanted to come up here and see for myself what’s going on, especially in the time of COVID when we need to be working together to save lives. Having these additional threats through borderization is just, it’s just inhuman. My understanding is, since the ABL was closed in September, at least 13 South Ossetians have died who could have been saved had they been able to come and get health care and medical services here in Tbilisi-controlled territory. So it’s really heartbreaking to see this kind of political militarized situation.  I’m also very concerned at some of the information that I’m reading, that I think hackers and irresponsible people in Russia and other places are attacking Georgia and the Lugar Lab when they’re in the middle of controlling a pandemic that the whole world is struggling with.  I think everybody has seen that the Lugar Lab, which is controlled by the Georgians and run by Georgian public health experts, has done a remarkable job with diagnostic testing, with providing accurate medical advice to the government, and to the public, so that the Georgian people have been able to contain this virus in a very responsible way. So attacks against the Lugar Lab are simply not true and really irresponsible and I’m so sorry whenever I see that. But it’s wonderful to be here today to have an opportunity to see this beautiful part of Georgia. Thank you.