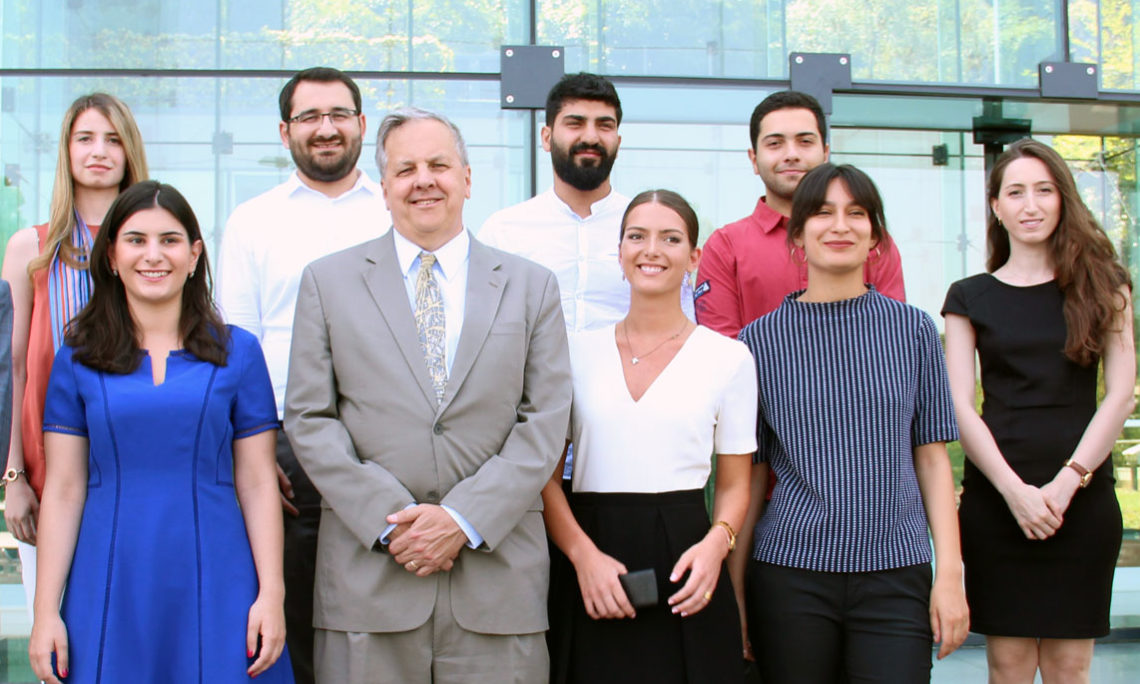 Ambassador: I think uh one of the most important programs we have in terms of the various assistance programs that the U.S. taxpayer funds.  I think probably the most important ones are programs where we support young Georgians to go and study the United States. And, the most prestigious exchange program that we have is the Fulbright program and I am particularly pleased that we are able to cohost this event with the Bank of Georgia, as the Bank of Georgia is making its own contribution to the study of Georgians in the United States.

Q-n about a prospective trade agreement and investment in Georgia

Ambassador: We, of course, have made a big investment in Georgia.  We really want Georgia to succeed to become a fully sovereign and resilient democratic country and one of the important ways that a country can become truly sovereign and resilient is to grow its economy.  The Trump administration is interested in looking at how the United States can help Georgia develop its economic reform and is also interested in seeing how we can help build trade between our countries. That’s obviously something in both countries’ interests, to increase trade.  It’s still early days in the administration but the administration has signaled that it is interested in exploring free and fair trade deals that are on a bilateral basis.

Q-n about how a free trade agreement could be expedited

Ambassador: First of all, I think that we need to get a signal from Washington that we are prepared to proceed.  We are starting to have some continuing talks on a technical level.  There is an Assistant U.S. Trade Representative who met with the Prime Minister and other representatives of the Georgian government.  I suspect that when the Vice President visits in a few weeks that this issue will be raised as well.  Personally, I would love to see it be sped up, expedited, but, of course, I think that this is a decision Washington will have to make and looking at priorities all over the world Georgia is one of our big priorities.  We’ll see after these visits in next few weeks where we stand.

Ambassador: I had the uh the opportunity, of course, to visit the new borderization activities and I was really quite shocked to see how close this new border sign was to the East West Highway and as I said on Friday, I just think that this is really appalling.  It has a real impact on a human level where farmers can’t access their land, people can’t freely cross over and visit family and friends, can’t trade freely, but it also obviously has a broader and even more disturbing aspect to it given that it is so close to a major transport artery not just for Georgia but for the entire south Caucasus region.

To answer your question, I think we, the international community, has to support and deter.  So, support in the sense that, as I was saying, we have to support Georgia’s efforts to become a fully democratic state.  We also have to support Georgia’s efforts in the Geneva talks to try and resolve these issues and, of course, these borderization activities do nothing to  contribute towards progress on resolving this issue.  And then we have to help Georgia deter further violations of its sovereignty and, as I said before, I think that helping Georgia become a resilient democratic free market economy is one of the best ways we can help Georgia become a vibrant resilient country, and that’s, I think, one of the best deterrents against the violations in the sovereignty.  And, then, of course, we also help Georgia build its defense capacity as well.  Thank you.