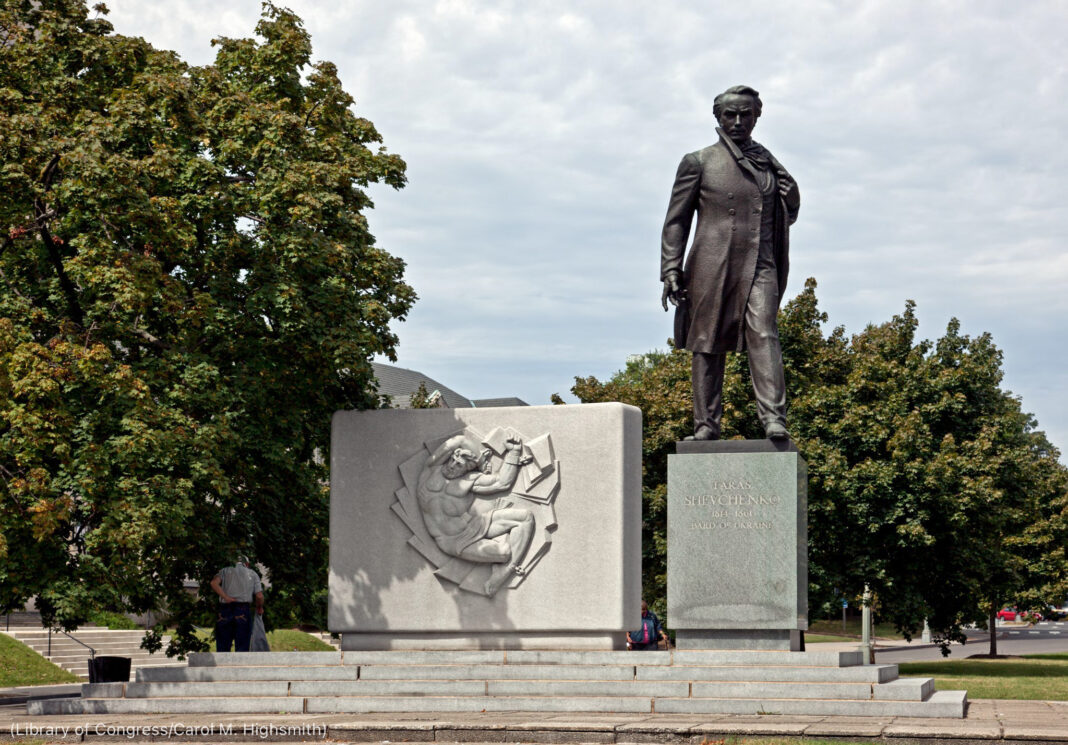 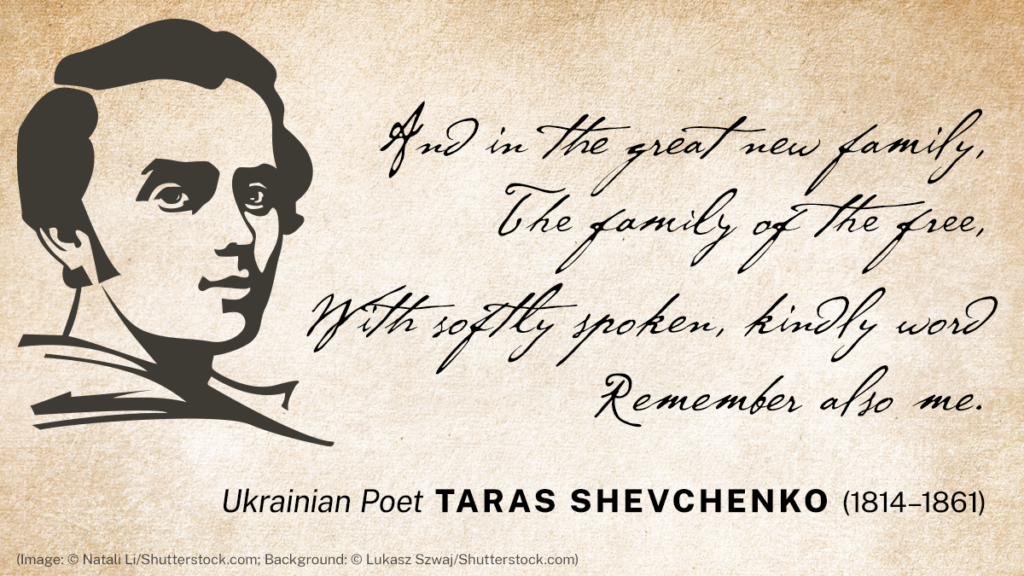 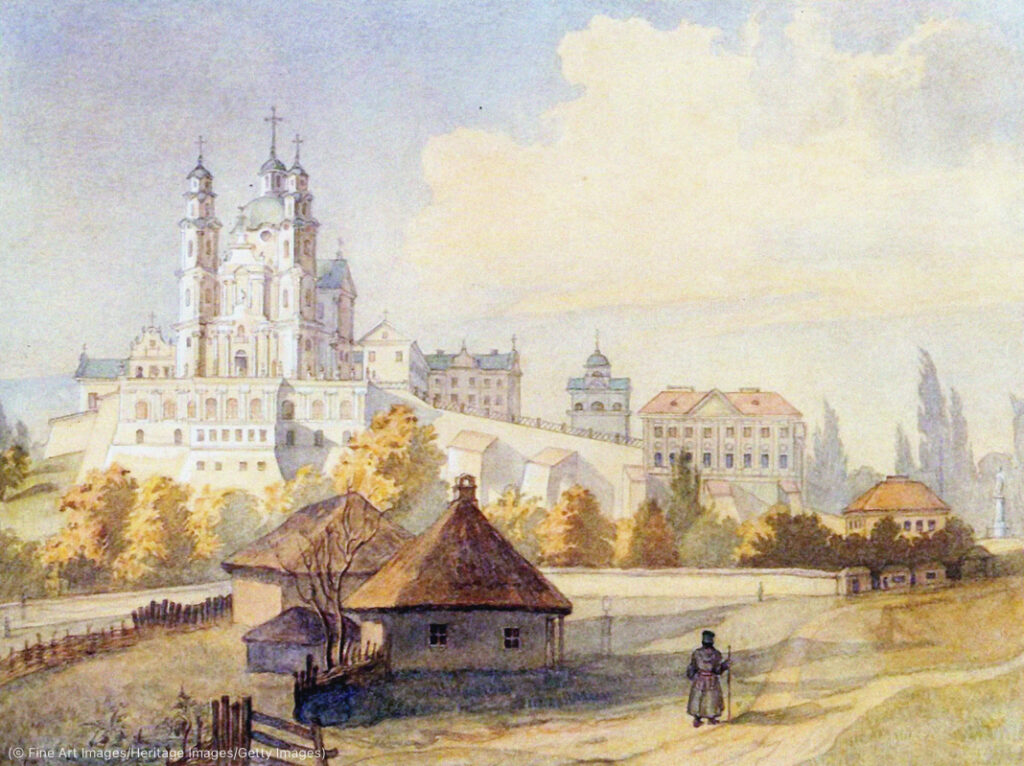 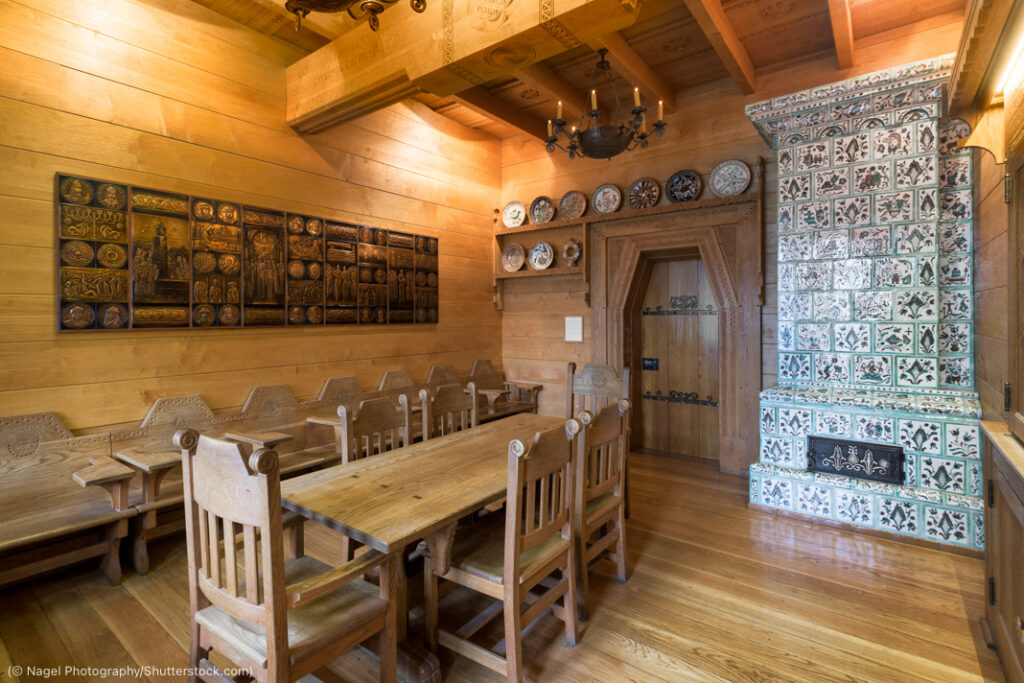 PITTSBURGH, PENNSYLVANIA/USA – JULY 30, 2019: Ukranian Room in the Cathedral of Learning on the campus of the University of Pittsburgh

Taras Shevchenko is a revered figure in Ukraine for his poetry, paintings, and love for the nation.

He also spent many years imprisoned for his pro-Ukrainian sovereignty activities in czarist Russia.

In 1960, the U.S. Congress passed legislation calling for the creation of a Shevchenko statue in Washington to commemorate the poet and freedom fighter’s 150th birthday. President Dwight D. Eisenhower signed the legislation, and four years later, after he left office, Eisenhower was there for the dedication of the statue, located a mile from the White House.

“You have come by the thousands from all over the United States; you have come from Canada, from Latin America and Europe, and from as far away as Australia, to honor the memory of a poet who expressed so eloquently man’s undying determination to fight for freedom and his unquenchable faith in ultimate victory,” Eisenhower said of those who had gathered to honor Shevchenko.

The bronze statue’s inscription says it is “Dedicated to the Liberation, Freedom, and Independence of All Captive Nations.” The statue is maintained by the U.S National Park Service.

President Lyndon Johnson praised the Ukrainian leader during the statue’s 1964 unveiling. He called Shevchenko a “crusader” for the rights and freedom of man.

“Shevchenko well deserves the honors paid him,” Johnson said. “He was more than a Ukrainian — he was a statesman and citizen of the world.”

Shevchenko (1814–1861) is considered the founder of modern Ukrainian literature and one who gave voice to the nation’s conscience. He was a poet, painter and liberation figure. Born into serfdom, he became an orphan at age 11. Recognizing his artistic talent, fellow intelligentsia members enabled him to purchase his freedom in 1838. His poems describe the hardships of Ukraine’s history, especially the plight of workers and peasants. His first work of poetry, Kobzar, was published in 1840. Shevchenko’s writings inspired Ukrainians to dream of freedom while angering Russian official censors. When he detailed the oppression of Ukrainians by the Russian czars, officials censored his writing. Few of his poems were published during his lifetime. Russia suppressed the use of the Ukrainian language.

To suppress Shevchenko’s work, Russian officials had him arrested, exiled without trial and forced into military service in 1847. He was not released for 10 years. Czar Nicholas I prohibited him from further writing or painting.

Calling his exile a “prison without doors,” Shevchenko continued to write poetry and paint despite the ban. After returning from exile in 1857, he produced some of his greatest landscapes and portraits.

In 1859, Shevchenko received permission to travel to Ukraine. But he was arrested on blasphemy charges and ordered to St. Petersburg, where he died in 1861 at the age of 47. He is buried in Chernecha Hill (today called Taras Hill) by the Dnieper River near Kaniv, Ukraine.

Every March, Ukrainians celebrate Shevchenko’s life. In the United States, there are many and varied tributes to the great artist.

Among other U.S. sites paying tribute to Shevchenko:

Many of Shevchenko’s works and books about him also are in the collection of the Library of Congress in Washington, the world’s largest library.

A quote from Shevchenko is inscribed in the center beam at the Cathedral of Learning’s Ukrainian Room at the University of Pittsburgh. It reads, “Learn, my brothers! Think and read … Learn foreign thoughts, but do not shun your own country.”