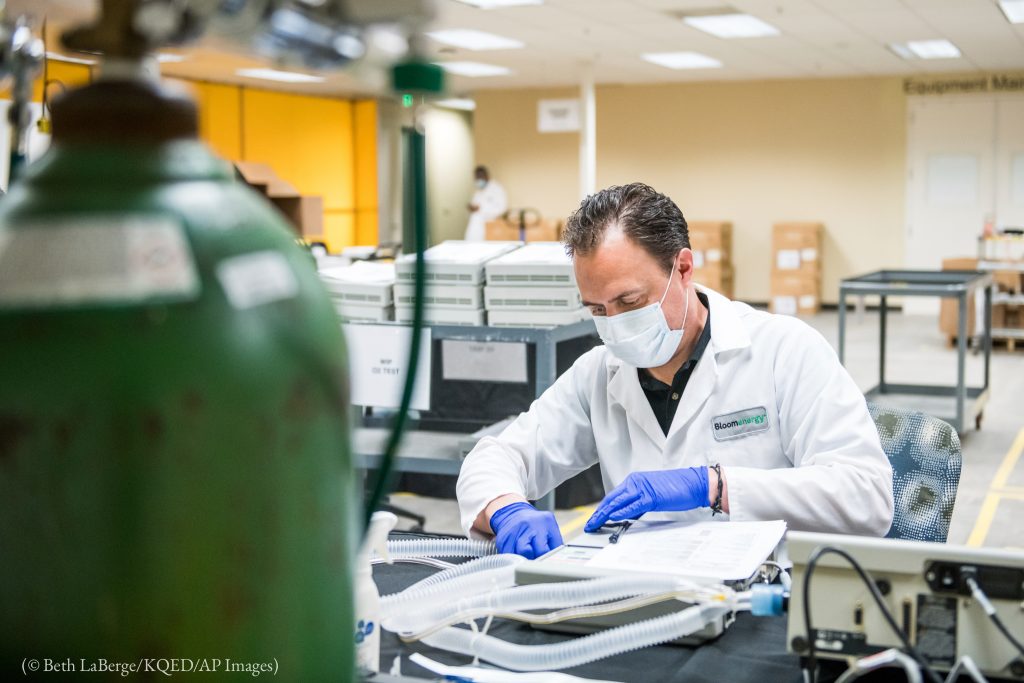 Small businesses across America are at the forefront of a nationwide mobilization against the novel coronavirus.

Producers of everything from athletic gear to boat covers and whiskey have shifted production to making masks, face shields and hand sanitizer to slow the spread of the disease.

President Trump has declared the COVID-19 outbreak a national emergency. The disaster has prompted an outpouring of support, including production changes reminiscent of World War II, when U.S. automakers shifted from producing cars to planes and tanks to support the war effort.

Orucase, in California, normally produces cycling luggage. The company says on its website that its expertise is now best suited to sewing face masks. Orucase estimates it could soon be making upwards of 500,000 face masks per week.

There has been a shortage of face masks and surgical gear as the COVID-19 pandemic progresses. Some California apparel manufacturers have stepped up to meet the challenge. AST Sportswear/Bayside Apparel of Brea, California, shifted 30 of its sewing machines from making T-shirts to manufacturing face masks, said Abdul Rashid, the company’s chief operating officer, told Apparel News.

Working in partnership with California state officials, Bloom Energy started refurbishing unused ventilators from the 2009 H1N1 flu epidemic to help patients who are severely ill from COVID-19. The company estimates it could soon refurbish 1,000 ventilators per week. Almo Corporation, based in Pennsylvania, which ships appliances and electronics, has agreed to quickly ship refurbished ventilators to health care facilities.

“We have to help,” Bloom Energy Chairman and Chief Executive Officer KR Sridhar said in a March 28 statement. “Community isn’t defined just by physical proximity; it’s coming together in a time of need to act in the interest of the greater good.”

Clothing producers like Blue Delta Jeans, in Mississippi and Sweaty Bands, in Ohio, say their resources are now best put to making masks that help remind people of government guidelines to remain socially distant and not touch your face unnecessarily.

“It’s been a whirlwind for us,” a representative of Litchfield Distillery in Connecticut said of shifting production from alcoholic beverages to hand sanitizer. The distillery began producing hand sanitizer March 16 and produced 1,900 liters, or over 16,000 bottles, in a little more than a week.

The distillery official added, “We’re happy to be able to help people during this time.”