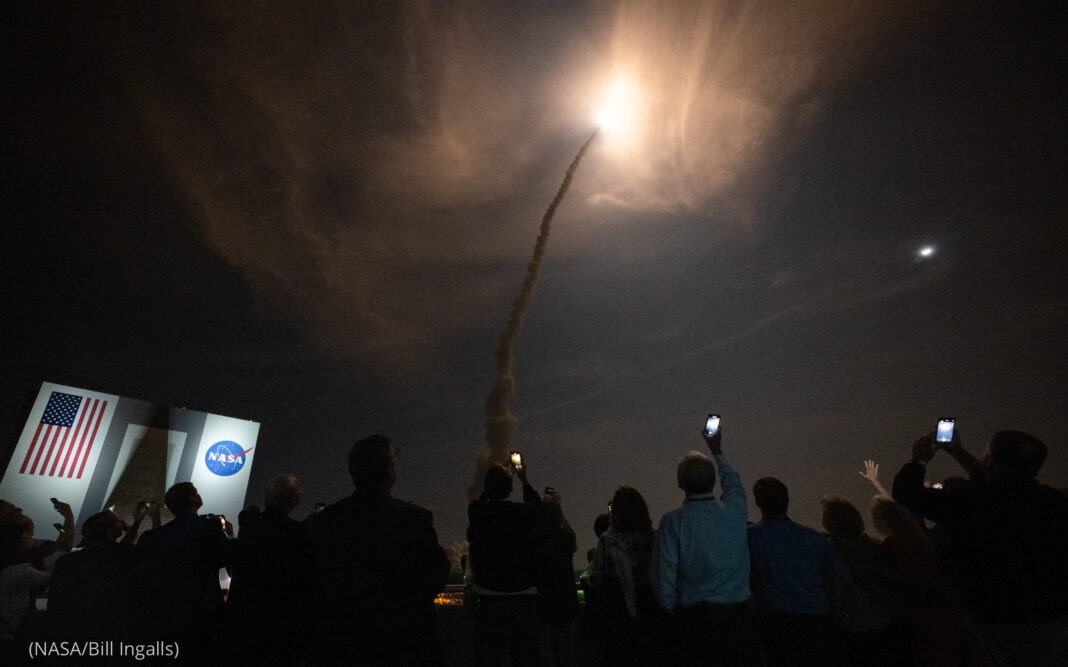 A crowd watches the launch of NASA's Artemis I mission at the Kennedy Space Center in Cape Canaveral, Florida, November 16. The mission will carry the Orion spacecraft beyond the moon in preparation for future crewed missions. (NASA/Bill Ingalls)
By Dave Reynolds

NASA launched Artemis I November 16, the first in a series of space missions to enable future human exploration of the moon and Mars.

The uncrewed, 25.5-day mission sends the Orion spacecraft on a journey of more than 2 million kilometers, farther than any spacecraft built for humans has ever traveled. Artemis I will allow NASA to test Orion’s systems before the spacecraft carries astronauts during Artemis II.

“This uncrewed flight test will push Orion to the limits in the rigors of deep space, helping us prepare for human exploration on the Moon and, ultimately, Mars,” NASA Administrator Bill Nelson said after the launch at 1:47 a.m. Eastern Standard Time.

Working with international and commercial partners, the Artemis program aims to establish the first long-term presence on the moon and send astronauts to Mars.

Orion left Earth on the force of NASA’s Space Launch System rocket, the most powerful in the world. The European Space Agency provided a service module to propel Orion from Earth’s orbit to the moon.

After flying near and beyond the moon, Orion will reenter the Earth’s atmosphere traveling 11 kilometers per second, before returning to Earth in waters off the coast of Baja California December 11.

“Through the Artemis program, the United States is building the broadest and most diverse international human space exploration coalition in history,” Secretary of State Antony Blinken said November 16, noting the program will advance science and technology. “We look forward to continued work with international partners on future missions.”