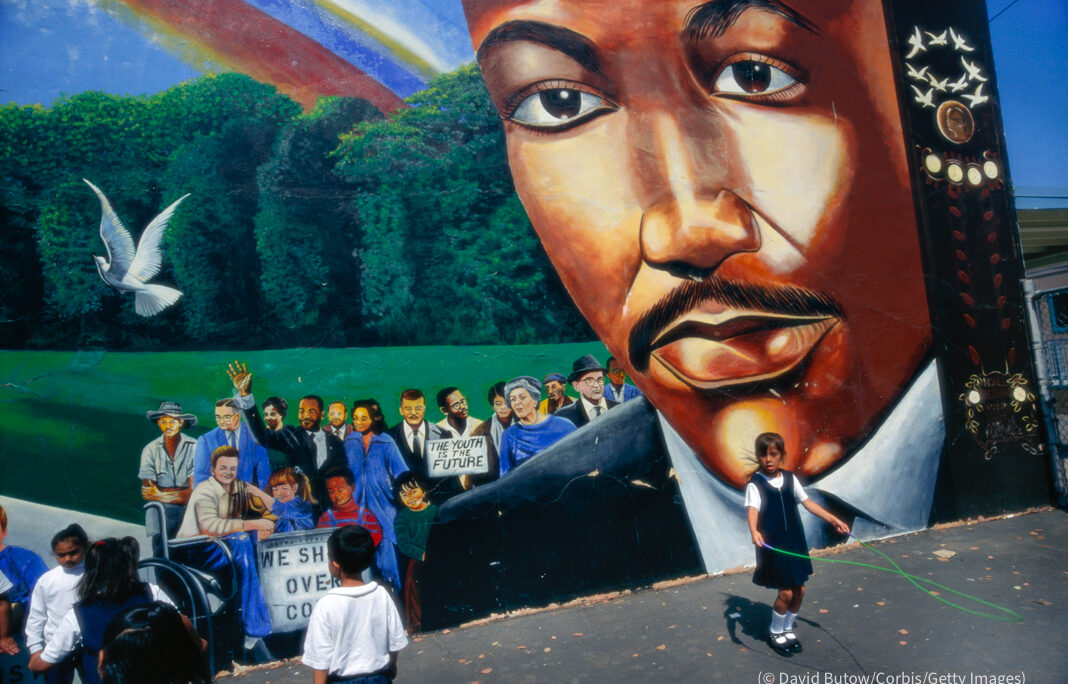 Children play near a mural of Martin Luther King Jr. at a San Diego school named in his honor, one of dozens of American schools named for King. (© David Butow/Corbis/Getty Images)

Americans will honor Martin Luther King Jr. this year on January 18, the date of the federal holiday commemorating the civil rights hero.

But students from the Martin Luther King Jr. Academy for Boys in Toledo, Ohio, stand each and every day to pledge allegiance of the flag and to recite the school’s creed inspired by King’s life.

“Intelligence plus character … is the true goal of education.” – Martin Luther King Jr.

The creed includes a pledge to become a man of distinction by showing respect for everyone, believing in oneself, doing one’s best, accepting responsibility, being ready to learn and developing positive relationships.

King’s portrait graces every room and hallway in the building. Its classrooms are designated by street signs commemorating notable African American men, including one that reads “Martin Luther King Jr. Street.” The curriculum offers regular lessons about King.

His March on Washington, for example, propelled passage of the Civil Rights Act of 1964, banning discrimination. His activism also led to the Voting Rights Act of 1965, which outlawed practices that had denied Blacks’ right to vote.

“It’s a recognition, it’s a respect of the legacy of Dr. King and of all the things that he’s done and knowing that he suffered and … made a lot of sacrifices for the rights and privileges that we do have today.”Timing of lessons goes beyond the January holiday commemorating King’s birthday or the month of February, designated as Black History Month. “It’s just not a month; it’s an attitude,” Principal Willie Ward explains.

What’s in a name?

Local officials across America have named at least 110 public schools after King, according to the National Center for Research Statistics. Georgia, Massachusetts and Tennessee are among the states with schools named after him.

Such schools teach about King’s legacy through rich lessons across their curriculums.

Students graduating from Martin Luther King Jr. College Preparatory High School in Memphis, Tennessee, for example, are expected to be versed in social justice and involved in community service.

On January 18, the date of this year’s MLK Day, the school will launch the MLK Social Justice Initiative with two projects. The first is a coat drive in which students will team up with Memphis officials to give away 1,000 coats and other winter essentials. The second is a campaign to donate toiletries and serve hot soup and chili to the needy.

Students within the initiative will also participate in a virtual workshop to learn about King’s connection to Memphis. (King was in Memphis to support sanitation workers demanding safer conditions and better wages when he was assassinated by a white racist on April 5, 1968.)

The preparatory school is 97 percent Black. Its administrators, noting that racial discrimination still exists, say it’s important for students to learn that their voices are powerful and how to organize strategically.

Principal Delnita Mickey expects her teachers to guide students in “how to think, how to make good decisions and have high expectations for themselves, and how to work in the community.”

At Dr. Martin Luther King. Jr. Elementary School in Macon, Georgia, 120 kilometers from King’s birthplace in Atlanta, a large mural depicting King’s face and quoting his words — “Intelligence plus character is the true goal of education” — welcomes anyone entering the school.

There, students focus on his character while developing their own, and learn what he meant to the civil rights movement, Principal Tawanya Wilson says.

Fifth graders traditionally visit King’s gravesite and the Ebenezer Baptist Church, where King was a pastor. (This year those visits may be virtual.)

The near-constant focus on King’s legacy is because the school’s name is “synonymous with greatness [and] we are on a mission for greatness,” Wilson said.