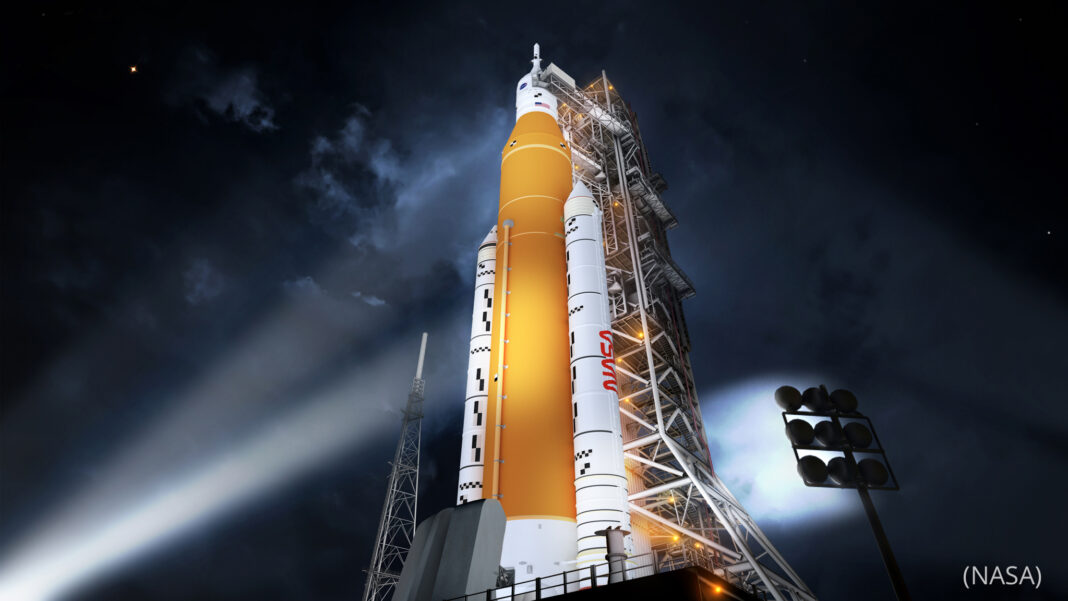 NASA’s new rocket, the Space Launch System, will send astronauts to the moon on the Artemis missions. (NASA)

President Biden is committed to NASA’s multilateral mission to return to the moon and send astronauts to Mars.

“Through the Artemis program, the United States government will work with industry and international partners to send astronauts to the surface of the moon,” White House Press Secretary Jen Psaki said February 4, announcing the Biden administration’s support for NASA’s Artemis program.

The Artemis program aims to land the first woman and next man on the moon by 2024, and is planning for a human mission to Mars.

The world honors space exploration on International Day of Human Space Flight, April 12, the 60th anniversary of the first manned space flight by Yuri Gagarin of the Soviet Union in 1961. U.S. astronaut Neil Armstrong became the first person to walk on the moon on July 20, 1969.

The Artemis moon landing will be the first time humans have reached the moon since NASA’s Apollo 17 mission in 1972. Artemis I is currently scheduled to launch in November. Although Artemis I will not have a crew, it is the first in a series of missions that will enable future human exploration of the moon and Mars.

NASA recently announced a team of 18 astronauts for future Artemis missions. The team reflects the diversity and range of opportunity within the United States, with women and people of color making up half of the team.

The Artemis program is also bolstering international partnerships. The United States and seven other nations signed the Artemis Accords on October 13, 2020. The Artemis Accords are a series of guiding principles to ensure future space exploration is peaceful, sustainable and beneficial to all.

The Artemis Accords follow the principles of the Outer Space Treaty of 1967, which prevent nations from claiming sovereignty over outer space, and seek to facilitate exploration, science and commercial activities for all humanity to enjoy. More countries are expected to sign the agreement, which already includes Australia, Canada, Italy, Japan, Luxembourg, Ukraine, the United Arab Emirates, the United Kingdom and the United States.

Since taking office, Biden has hailed NASA missions, such as the February 18 landing of the Perseverance rover on Mars, as showing the value of international collaboration. The rover will search for signs of ancient life on Mars using technology from nations across Europe.

“It’s on a mission of exploration, with elements contributed by our European partners to seek evidence of the possibility of life beyond our planet and the mysteries of the universe,” Biden told the Munich Security Conference February 19. “That’s what we can do together.”