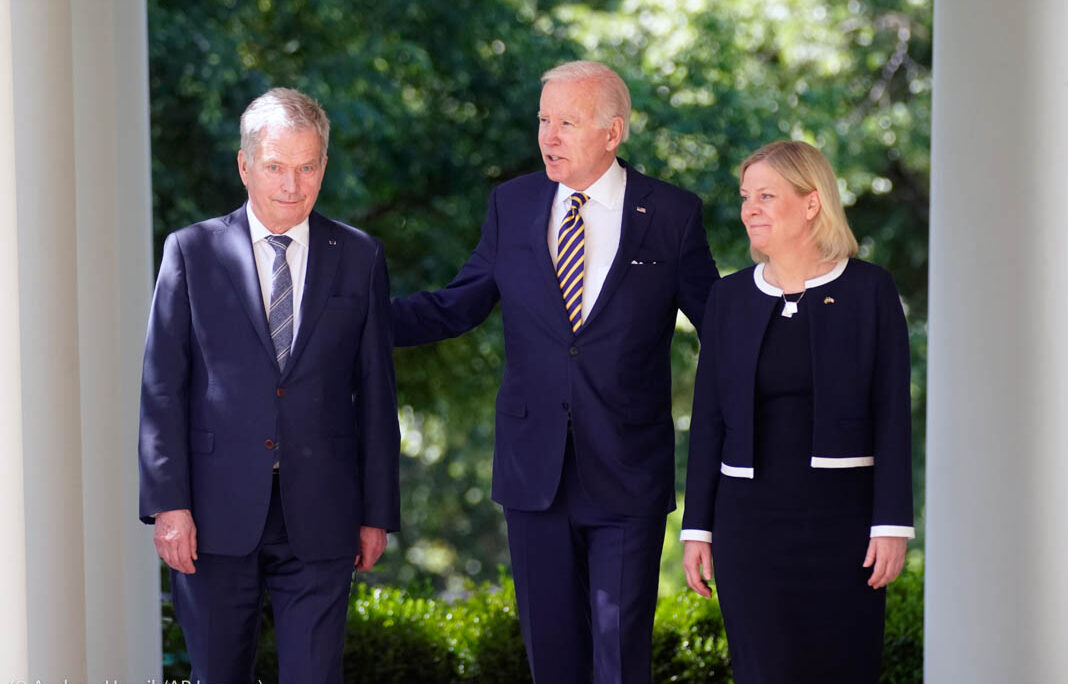 “I am proud to welcome and offer the strong support of the United States for the applications of two great democracies and two close, highly capable partners to join the strongest, most powerful defensive alliance in the history of the world,” Biden said May 19, speaking alongside Finland’s President Sauli Niinistö and Sweden’s Prime Minister Magdalena Andersson at the White House.

Biden said the requests reflect the sovereign right of Finland and Sweden to choose their own security relationships and the continuing importance of NATO. “Today, there is no question: NATO is relevant, it is effective, and it is more needed now than ever,” he said.

The leaders of Finland and Sweden both said Russia’s war against Ukraine motivated their requests for NATO membership and that their country’s membership would strengthen the alliance. “Russia’s war in Ukraine has changed Europe and our security environment,” Niinistö said, adding that joining NATO would strengthen Finland’s trans-Atlantic security.

“With Sweden and Finland as members, NATO will also be stronger,” Andersson added. “We are security providers with sophisticated defense capabilities. And we are champions of freedom, democracy, and human rights.”

.@SecBlinken: President Putin launched this brutal and unprovoked war thinking he could eliminate Ukraine as an independent country and divide @NATO. Instead, he’s only reinforced Ukraine’s sovereignty and independence as Ukraine has chased the Russian army away from Kyiv. pic.twitter.com/37BUwtPFVK

Founded in 1949, NATO has grown to 30 member countries and safeguards more than 1 billion people in Europe and North America. Under Article 5 of the Washington Treaty, NATO’s founding document, an attack on one member is an attack against them all.

During a March 24 meeting of NATO allies in Brussels, Biden condemned Russia’s unprovoked and unjustified war against Ukraine and said “NATO has never, never been more united than it is today.” He also announced the United States would contribute an additional $1 billion in humanitarian aid for those displaced within Ukraine and for refugees from Ukraine in neighboring countries. The United States has provided $3.9 billion in military assistance since Russia launched its premeditated, unprovoked and brutal war against Ukraine on February 24.

Finland and Sweden formally requested NATO membership May 18. Each NATO member must sign and ratify, according to their domestic procedures, a protocol to the Washington Treaty accepting Finland’s and Sweden’s applications for membership. NATO allies commit to democratic principles and to maintain their own defense and resilience as well as to be ready to contribute to the defense of other allies.

Biden said May 19 that he will send reports to the U.S. Congress in favor of the two long-standing U.S. partners’ applications for NATO membership, adding that they meet every requirement. He also highlighted the fact that Finland and Sweden are both already working bilaterally to support the people of Ukraine.

Andersson said Sweden and the United States have a long history of cooperation based on shared beliefs in democracy and freedom. “Today, the situation in Ukraine reminds us of the darkest days of European history,” she said. “And I must say that, during dark times, it is great to be among close friends.”