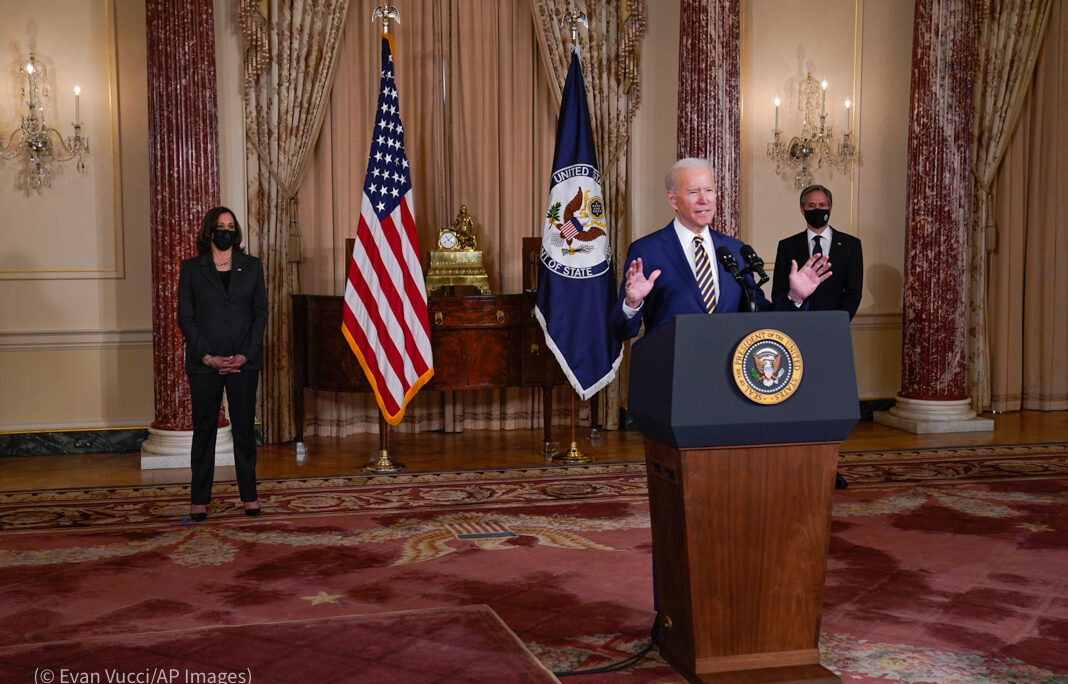 President Biden is vowing to strengthen America’s international relationships and tackle global challenges with the help of other nations.

In a major foreign policy speech, Biden said the United States will work with the international community to tackle global challenges like the COVID-19 pandemic and climate change, and to advance freedom and dignity for people around the world.

“America’s alliances are our greatest asset,” Biden said in a February 4 speech at the U.S. Department of State in Washington. Global challenges will only “be solved by nations working together and in common.”

With a renewed commitment to engage with its international partners, Biden said the United States can better advance America’s core democratic ideals around the world and better counter competitors and adversaries.

The president outlined several top priorities for U.S. leadership around the world:

This afternoon, I stopped by the State Department to meet with staff and thank them for their service to our nation. With their help, the United States will again lead not just by the example of our power, but by the power of our example. pic.twitter.com/0VyLgrMIAX

Biden also called out Russia’s election interference, cyberattacks, poisoning and jailing of opposition leader Aleksey Navalny, and suppression of its own people. He also called out China’s global economic coercion as a challenge that will not be ignored.

“We will compete from a position of strength by building back better at home, working with our allies and partners, renewing our role in international institutions, and reclaiming our credibility and moral authority,” he said.

Biden has already taken steps to bolster America’s international cooperation. After his January 20 inauguration, he moved to return the United States to the Paris Agreement and the World Health Organization to better tackle climate change and the COVID-19 pandemic.

The president promised to support the U.S. diplomatic corps and other State Department staff as they advance relationships with partners and allies, engage with adversaries and address global challenges.

“I will have your back,” Biden told State Department officials. “With your help, the United States will again lead not just by the example of our power but the power of our example.”