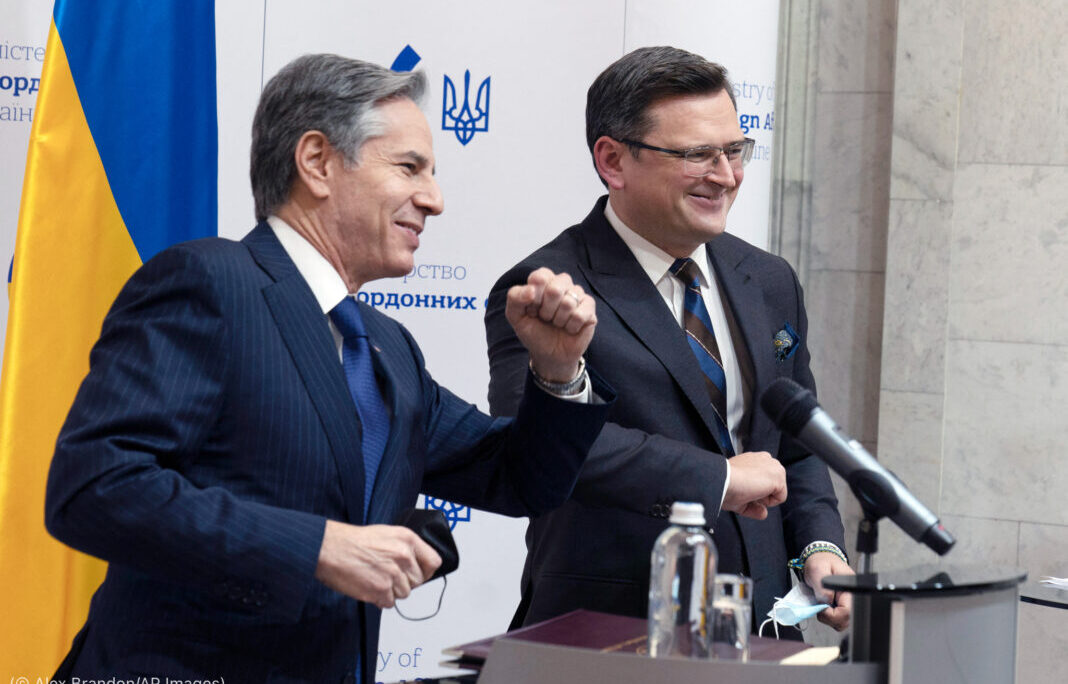 The United States and European allies continue to emphasize diplomacy as the solution to the crisis in Ukraine as Russia escalates tensions with an unprovoked military buildup on Ukraine’s border.

“We’ve been clear: If any Russian military forces move across Ukraine’s border, that’s a renewed invasion,” Blinken said January 21 in Geneva. “It will be met with swift, severe, and a united response from the United States and our partners and allies.”

Blinken kicked off his trip in Kyiv where he met Ukraine’s President Volodymyr Zelenskyy and Foreign Minister Dmytro Kuleba.

The secretary said he was in Ukraine “to reaffirm the United States unwavering support for Ukraine at a time when its security, its prosperity, its democracy, its fundamental right to exist as a sovereign, independent nation are facing an unprecedented challenge from Russia.”

He noted that Russia undermined the nation’s sovereignty in 2014 when it invaded Ukraine, seized Crimea and instigated conflict in the Donbas region.

Russia’s repressive measures in Ukraine include:

“The Ukrainian people chose a democratic and European path in 1991,” Blinken said. “And unfortunately, ever since you’ve faced relentless aggression from Moscow.”

The secretary then traveled to Berlin, a city once divided during the Cold War when Germany was divided into east and west.

“Despite Moscow’s reckless threats against Ukraine and dangerous military mobilization — despite its obfuscation and disinformation — the United States, together with our allies and partners, have offered a diplomatic path out of this contrived crisis,” Blinken said January 20 in a speech at the Berlin-Brandenburg Academy of Sciences.

While Russia states that it is acting in self-defense, its posture is causing greater instability. The secretary noted that Russian President Vladimir Putin said he doesn’t believe that Ukraine is a sovereign nation. Putin made his intentions about an invasion clear in 2008 when he told President George W. Bush that “Ukraine isn’t a real country.” And in 2020, Putin said Russians and Ukrainians are “one and the same,” the secretary said.

Blinken said the current conflict is international because one nation cannot dictate foreign policy outside its borders or subvert another nation’s will without consequences.

Russia deployed 100,000 troops near Ukraine’s borders and stationed troops inside Moldova without its consent in addition to sending troops and hardware to Belarus this week.

“Russia is continuing to escalate its threat toward Ukraine,” Blinken said in Berlin. “We’ve seen that again in just the last few days with increasingly bellicose rhetoric, building up its forces on Ukraine’s borders, including now in Belarus.”

Blinken met with Russia’s Foreign Minister Sergei Lavrov on January 21 in Geneva. The secretary said the two had a “frank and substantive” discussion.

He asked Lavrov how Russia’s aggressive tactics since 2014 are aiding its claim of self-defense. “So many of the things that you’ve done in recent years have precipitated virtually everything you say you want to prevent,” Blinken said he told Lavrov.

The secretary had earlier noted the United States and its European partners held more than 100 meetings in recent weeks.

“We’re united in our commitment to finding a way forward through diplomacy and dialogue, but equally in our resolve to impose massive consequences should Russia choose the path of confrontation and conflict.”