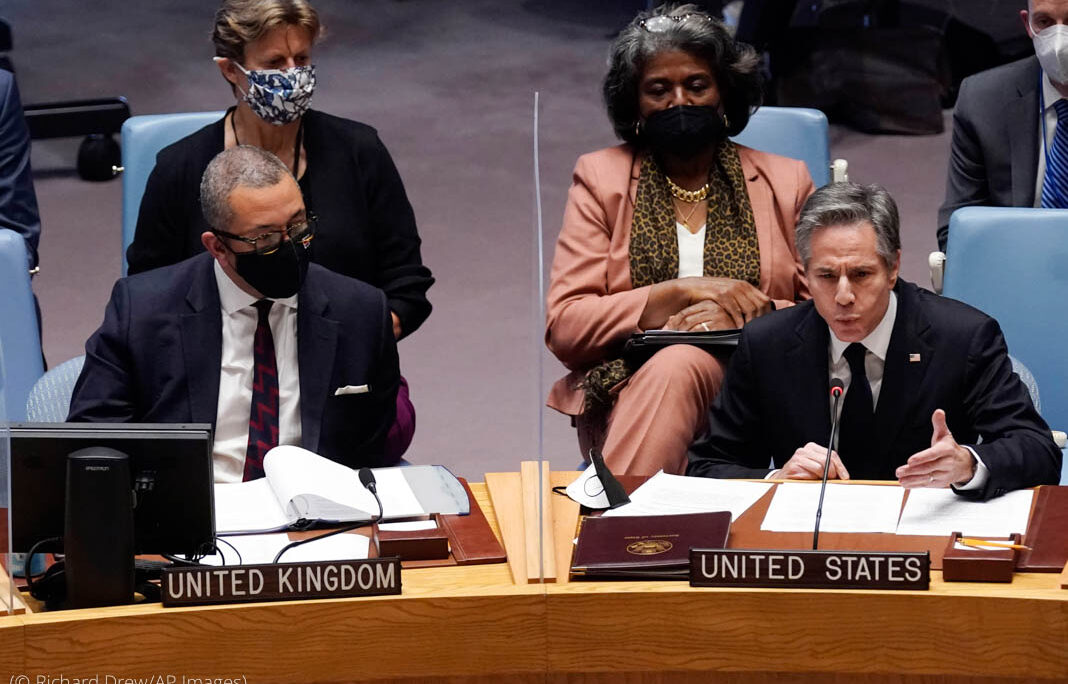 Secretary of State Antony Blinken urged Russia to reject the “path of war” and withdraw its troops from Ukraine’s borders. “As we meet today the most immediate threat to peace and security is Russia’s looming aggression against Ukraine,” the secretary said February 17 at the U.N. Security Council in New York. The secretary said evidence of Russia’s plans has been “unfolding in plain sight” for months. Russia has amassed 150,000 troops along Ukraine’s borders in Russia, Belarus and Russia-occupied Crimea. While Russia claims to be reducing its forces, Blinken said its troops, aircraft and ships could lead an attack on Ukraine in a few days.

Blinken emphasized that Russia could manufacture a fraudulent provocation, known as a “false flag operation,” blame the Ukrainian government, then use it as a spurious justification for invading Ukraine. The staged, false provocation could manifest as a terrorist attack in Russia or an attack using bombs or chemical weapons against civilians. Russia’s state-controlled media is already spreading false claims to lay the groundwork for an invented justification for war, the secretary said.

The secretary said the stakes go far beyond Ukraine. Russia’s continued threats challenge the founding principles of the United Nations. “This is a moment of peril for the lives and safety of millions of people, as well as for the foundation of the United Nations Charter and the rules-based international order that preserves stability worldwide,” Blinken said. The U.N. was founded on principles of national sovereignty whereby one nation cannot change the borders of another by force or dictate the foreign policy decisions of another nation. Conflict in Ukraine began in 2014 following Russia’s illegal occupation of the Crimean Peninsula and its instigation of a proxy war in eastern Ukraine.

The United States supports the Minsk agreements, which laid out a plan for ending the conflict in eastern Ukraine. The secretary noted “Russia’s persistent violations” of those agreements.

Blinken emphasized that Russia can choose an alternative path from war. The United States, with its allies and European partners, continue diplomatic efforts, including through the NATO-Russia Council and the Organization for Security and Co-operation in Europe’s Permanent Council.

“The Russian government can announce today — with no qualification, equivocation, or deflection — that Russia will not invade Ukraine. State it clearly and plainly to the world,” he said. The secretary urged Russia to send its troops back to their barracks and continue diplomatic discussions with Ukrainian and European officials. “We have a responsibility to make every effort for diplomacy to succeed,” he said.