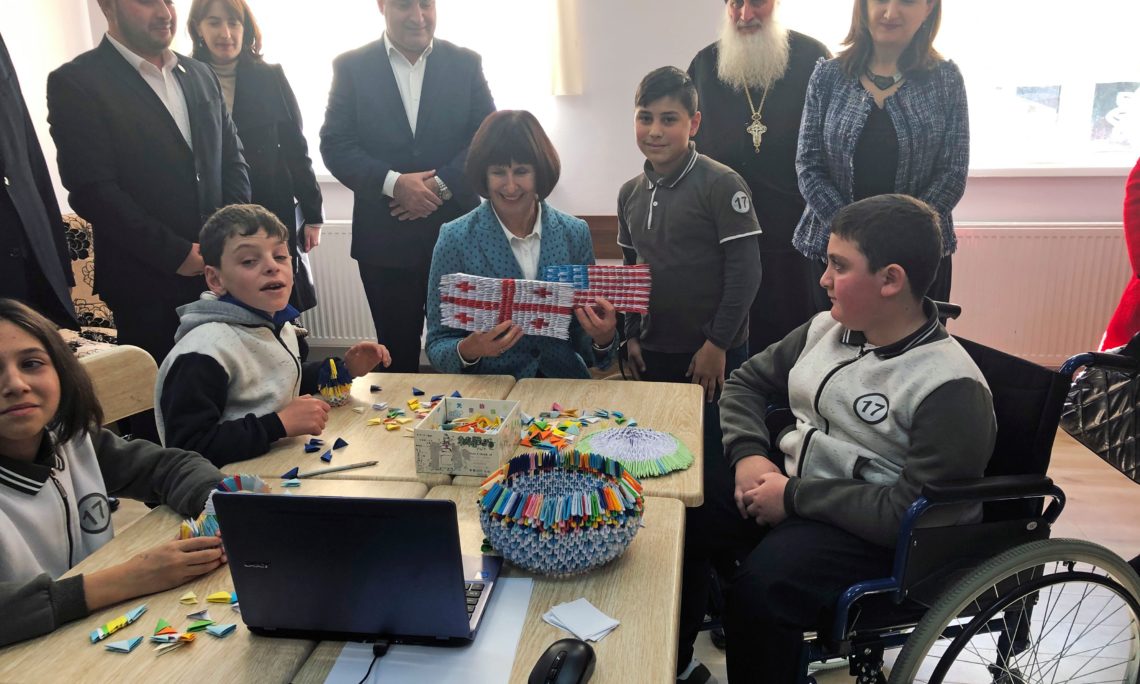 On December 5, 2019, Charge d’Affairs Elizabeth Rood attended the opening of #17 Public School in Kutaisi, celebrating its Millennium Challenge Corporation-funded renovation. Kutaisi School # 17, which enrolls more than 1,400 students, was renovated in July of 2019 in the third and final phase of MCC-funded school rehabilitations. It is one of 91 schools renovated as part of the $54 million “Improving Learning Infrastructure Activity. MCC financed the full-scale internal and external renovation, including the installation and equipping of modern science laboratories. The Georgian government provided furniture and IT equipment and is also responsible for all ancillary exterior work.

CDA Elizabeth Rood: I am so happy to be here today, along with local government officials, to see the renovated #17 Public School in Kutaisi. This is a special school, because it has a very long and noble history, and it is beautiful to see what a fine job has been done with the renovation through the Millennium Challenge Compact. This is one of 91 schools around Georgia that have been renovated with the assistance of the United States Millennium Challenge Compact, and in all of these schools, over 37 000 Georgian children will have better opportunities for a world-class education, schools with heat, modern furniture, scientific laboratories, computers and everything they need to become successful members of society in the future and to contribute to Georgia’s prosperity.

CDA Elizabeth Rood: In general, I would say the United States is concerned about the elevated level of political tensions we are seeing in Georgia, and that is why we are happy to support a dialogue between the ruling party and opposition parties.  Of course, we fully support the right of Georgian citizens to express their freedom of assembly and freedom of speech.  We certainly believe that should only be done peacefully, never with violence, and we would expect that the police would respond equally, and without any discrimination, to any violence that occurs in demonstrations.

Q-n about Nika Gvaramia’s FB post allegedly suggesting overthrowing the government, which was shared by Mikheil Saakashvili as well. How dangerous can this be and how would you assess?

CDA Elizabeth Rood: I would say that Georgia is a democratic country and the United States has invested a great deal, through all the years of our strategic partnership,  to help strengthen Georgia’s democratic institutions, and we certainly believe that any change should take place through political processes, through Parliament, and through the existing democratic institutions.

Q-n about street protests that followed the failure of the vote for the proportional system, and the so-called German model proposed by the opposition

CDA Rood: the United States welcomed the decision to move to proportional elections in 2020, and so, along with Georgian citizens, we were disappointed that the constitutional amendments necessary for that transition did not pass Parliament on November 14 and created distrust between the ruling party and the opposition and distrust amongst society.  So, we now see a difficult political situation.  That is why we and our European Union colleagues have joined together to try to assist the Georgian ruling party and the opposition parties to rebuild trust, which is the first step, and to begin a dialogue, which began last Saturday, to find a way forward.  Other models could be discussed: the German model is one thing that has been on the table, and the dialogue is going to continue.  I cannot tell you how the dialogue will complete, but I can tell you that with goodwill from all sides, we can reach a good result.

Q-n about the U.S. Congress expressing disapproval of inviting Russia to G-7 Summit, one of the reasons being Russia’s occupation of Georgia’s and Ukraine’s territories

CDA Rood: I do not have the details about a new initiative from our Congress, but it is clear that Russia does not share the values of the G-7 countries, and that is demonstrated by, among other things, Russia’s continued occupation of Georgia’s territories.