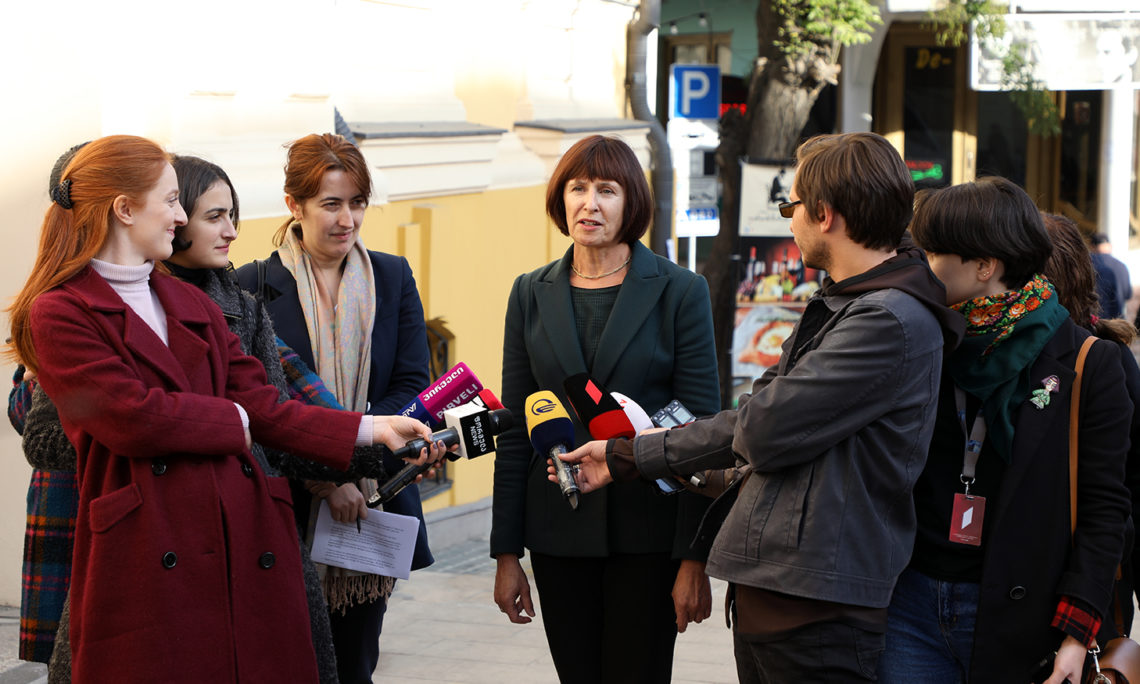 CDA Rood: Jvari Monastery is one of the most important symbols of Georgian culture, religion and history.  It is unique and very important from an architectural perspective and, of course, it is considered the birthplace, in a sense, of Christianity here in Georgia.  But at the same time, because it is a very old structure and is subject to very harsh weather conditions and because many tourists visit – hundreds of thousands a year – it is facing erosion and degradation in other ways.  And so, we are very pleased the U.S. Embassy, through the Ambassador’s Fund for Cultural Preservation, is going to be able to help with the preservation of Jvari Monastery.  Every year, projects from around the world enter a competition through Embassies, American Embassies, for funding under the Ambassador’s Fund for Cultural Preservation, and this year, the Jvari Monastery project won a $100,000 grant.  This grant is the first phase, and this $100,000 grant will finance an expert’s study of the exterior walls, the façade of the main chapel of the church, and on the basis of this study, there will be developed a conservation-protection strategy and plan, which we hope then will be implemented in future years in further phases of the project.

CDA Rood:  What I can tell you is that since the Ambassador’s Fund for Cultural Preservation was established in 2001, the U.S. Embassy has used this fund to finance almost 20 projects around Georgia.  These have included preservation projects for important sites such as Gelati Monastery.  Last year, the project we funded was for seismic installations at Uplistsikhe, which will help determine where the Uplistsikhe complex is vulnerable to seismic shocks like earthquakes and therefore, what restorative work needs to be done to prevent damage.  We have funded the preservation of rare manuscripts, as well as recordings of folk music and many other sorts of projects.  I can’t tell you what the next winner will be, but our immediate goal is to be able to fund the actual implementation of the work on Jvari Monastery’s façade.

CDA Rood:  What Deputy Assistant Secretary Kent said in his testimony was that it would be wrong for any country – Georgia, Ukraine, or any other country – to conduct investigations or prosecutions directed at those perceived to be enemies of the ruling party in that country.  There have been some cases in Georgia where we have expressed concern about the timing and the context of the investigations or prosecutions, and we monitor those kinds of cases closely.

q-n: would you personally agree with what DAS Kent’s assessment?

CDA Rood:  The way you described Mr. Kent’s statement is not what he said.

q-n about  the recent incidents at the Administrative Boundary Line

CDA Rood:  Well, we continually express our deep concern about the situation along the Administrative Boundary Line with South Ossetia, Georgia’s Tskhinvali region; and we have noted with deep concern the increasing number of incidents along this line.  And I would add the recent detentions of two Georgian citizens along the line to the long list of incidents about which we can raise a concern and which we certainly will discuss in the next round of Geneva International Discussions.