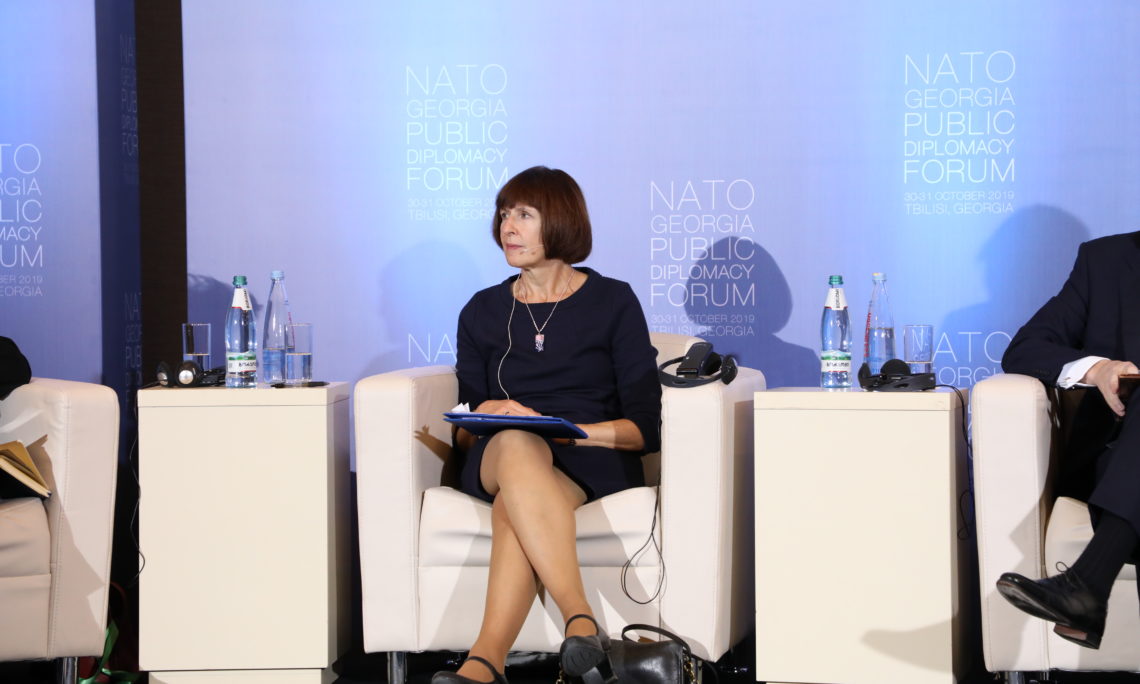 CDA Elizabeth Rood at the 4th Annual NATO-Georgia Public Diplomacy Forum to chair a panel discussion called “Investing in Resilience: The Power of Education.” The NATO-Georgia Public Diplomacy Forum provides a high-level platform for cross-sector collaboration in order to explore the common ground and goals between NATO, Allies, and Georgia in utilizing public diplomacy and strategic communications to advance our shared common interest and policy goals. In her remarks, CDA Rood emphasized the importance of effective strategic communications in the development and success Georgia has achieved through its efforts to build resiliency. The United States remains strongly committed to supporting Georgian efforts.

Q-n about Kelly Degnan’s testimony and the messages she delivered at the committee hearing on the importance of judiciary reform, elections and media pluralism in Georgia, also, when will she arrive to Georgia?

Charge d’Affairs, Elizabeth Rood:  As you saw, Ambassador-nominee Kelly Degnan had her hearing with the Senate Foreign Relations Committee recently, and she expressed her very firm commitment to advance U.S. policy here in Georgia and to further strengthen the U.S.- Georgia strategic partnership.  And all of the things she mentioned in her hearing as priorities are things that we are actively pursuing through all of the areas of the Strategic Partnership Charter that we share with Georgia, and that includes all of the different elements in the democracy and governance component of our Strategic Partnership Charter.  As to when we expect Ambassador-nominee Degnan to arrive, that depends on the timeline within the Senate for the Senate Foreign Relations Committee to schedule their vote and then for the full floor vote to take place. We hope that that will happen soon, but I cannot predict exactly.

Q-n about Kelly Degnan’s background in journalism and her support to media pluralism?

Charge d’Affairs, Elizabeth Rood: Ambassador-nominee Kelly Degnan is a very experienced diplomat, a very distinguished diplomat, with 26 years of experience that she is bringing to this job as a career member of our Foreign Service, as well as her professional experience before that.  And I think she is going to be an extremely strong partner and advocate for the U.S.-Georgia strategic partnership, including within our strategic partnership framework, our support for the further development of a diverse media landscape here in Georgia, which is a very essential underpinning for the democratic road.

Q-n about the humanitarian situation in occupied territories in reference to the recent case when a 70-year-old woman died in an ambulance because she was not allowed to cross the checkpoint to get emergency services?

Charge d’Affairs, Elizabeth Rood: We continue to be deeply concerned about the humanitarian situation in Georgia’s occupied territories, a situation that has continued to deteriorate over time.  We, of course, continue recall and condemn cases such as the deaths of Basharuli, Tatunashvili, Otkhozoria, Kvaratskhelia, and we can add to the tragic list the most recent case of the lady who was unable to receive medical care because she was not allowed to cross the Administrative Boundary Line.  It is for this specific reason that we have so strongly encouraged the de-facto regime of South Ossetia to open the checkpoints to allow people to pass back and forth, and not only for medical purposes, but in order to pursue their economic livelihoods and people to people contacts, which is so important for the lives of the people on the both sides of the line.

Q-n about the pre-election period in Georgia and suggestions for the upcoming elections?

Charge d’Affairs, Elizabeth Rood: In advance of the 2020 elections, and as Georgia moves toward the expected transition to fully proportional parliamentary elections next year, we think it is very important that the electoral reform legislation that is now being developed in the parliament fully reflect the recommendations of the OSCE/ODHIR monitoring mission, which the United States and the European Union have also encouraged the stakeholders to consider as they develop that draft.  And I would also say that those recommendations are aimed at addressing the shortcomings that have been noted by international and domestic observers in the 2018 and the 2017 elections here in Georgia, which we have mentioned and discussed many times.  I also would point to the recently-announced USAID program of support to electoral and political processes here in Georgia, which is going to work with a variety of partners and civil society organizations to strengthen the political processes and support all political parties in a pluralistic election environment, which we certainly hope to see.  We were very happy to join with the Speaker of Parliament recently in launching that program.

Q-n about Anaklia Port project and the possibility of its failure?

Charge d’Affairs, Elizabeth Rood: The United States continues to view the completion of the Anaklia Port project as very important for Georgia, for its economic growth and to fill its potential as regional logistical and trade hub, and the Georgian government has also expressed its strong support for the implementation of the project.  Yes, some members of the consortium have announced that they would be leaving the project, but other companies are in negotiation about potentially joining the project, and so, we look forward to what we hope will be the successful completion of those negotiations in such a way that ensures strong American participation in the project.