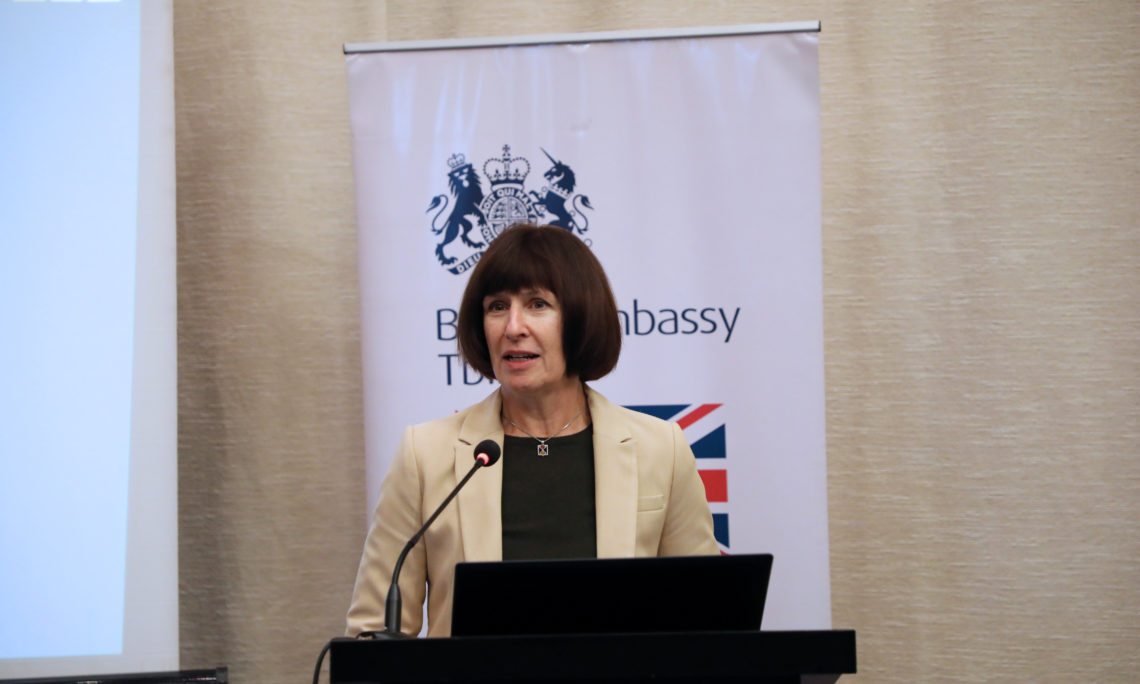 Today, CDA Elizabeth Rood attended the presentation of the Parliamentary Human Rights Committee’s annual report which highlighted several areas where the Parliamentary Committee achieved real progress with support from the U.S. government. These areas of cooperation included children’s rights, the prevention of and response to domestic violence, women’s rights, and the protection of persons with disabilities, among others.

The United States proudly continues to stand with Georgia as it builds a more inclusive society, where human rights are universal and well-protected.

Q-n about the report (presented by the HR committee) which left out major topics and issues regarding human rights violations, how do you assess this superficial report?

Charge d’affairs, Elizabeth Rood: Well, we have heard today the report of Parliament’s Human Rights and Civic Integration Committee on human rights in Georgia for 2019, and the report focused on the legislative work and the achievements of the committee itself, and it pointed to a number of very important achievements.  Among those are legislative improvements that relate to the rights of women, the rights of protection of children, the rights of protection of persons with disabilities, protections for workers and protections and better investigation for victims of domestic violence. So, all of these are very important things. The United States is proud to have partnered with the Human Rights’ Committee of Parliament in achieving many of these things, and we feel confident that, with the continued leadership of Parliament and the support of civil society and the international community, that human rights will continue to be even better protected and become even more universal in Georgia.

Q-n about congressman Markwayne Mullin’s letter to Prime Minister Gakharia where he criticized the democratic situation in Georgia in reference to the business environment. Georgian Dream representatives assessed this statement as just one congressman’s opinion, how would you comment?

Charge d’affairs, Elizabeth Rood: The letter from the congressman comes from a member of our legislative branch, so I will have to refer you to the congressman’s office for a specific comment about the letter. What I will say, as a representative of the executive branch, is that Georgia has made tremendous progress, and Georgia faces an important moment on its democratic path this year. For example, the political dialogue that the United States, the European Union and the Council of Europe are facilitating presents an utterly important opportunity for the ruling party and the opposition to compromise on designing an electoral system that is best for Georgia. It is also very important this year for Parliament to pass electoral reforms that will incorporate all of the recommendations of the OSCE/ODIHR observer mission. And of course, it is important also for the government to ensure that all investigations, prosecutions and judicial processes are completely free of political influence. These are the kinds of things that will further strengthen human rights and democracy in Georgia, as well as strengthen the climate for foreign investment. And so, these are also the kinds of things that will strengthen the shared values that are the underpinning of our strategic partnership.

Q-n: if everything is so smoothly, why are they [congressmen] so critical?

Charge d’affairs, Elizabeth Rood: Well, again, as a representative of the executive branch I would point to both a great deal of progress, a great deal of partnership and things that we still hope to see progress on, with respect to Georgia’s democracy.

Q-n: Occupation forces continue “borderization” near village Chorchana, what can we do for preventing such actions?

Charge d’affairs, Elizabeth Rood: The United States continues to be deeply concerned about the worsening situation over the past months along the Administrative Boundary Line with South Ossetia, including the situation in the Chorchana forest, where for the first time the occupation regime, the de facto South Ossetia administrative authorities, have pushed the Administrative Boundary Line into Tbilisi-administered territory. So I would encourage that all of the mechanisms that exist – the Incident Prevention and Response Mechanism and the Geneva International Discussions – be fully used to resolve the problems surrounding the Administrative Boundary Line. And once again, I will take the opportunity to express the United States’ unwavering support for Georgia’s territorial integrity and once again call on the Russian Federation to fulfill its obligations under the 2008 ceasefire and to withdraw its forces to pre-conflict positions.