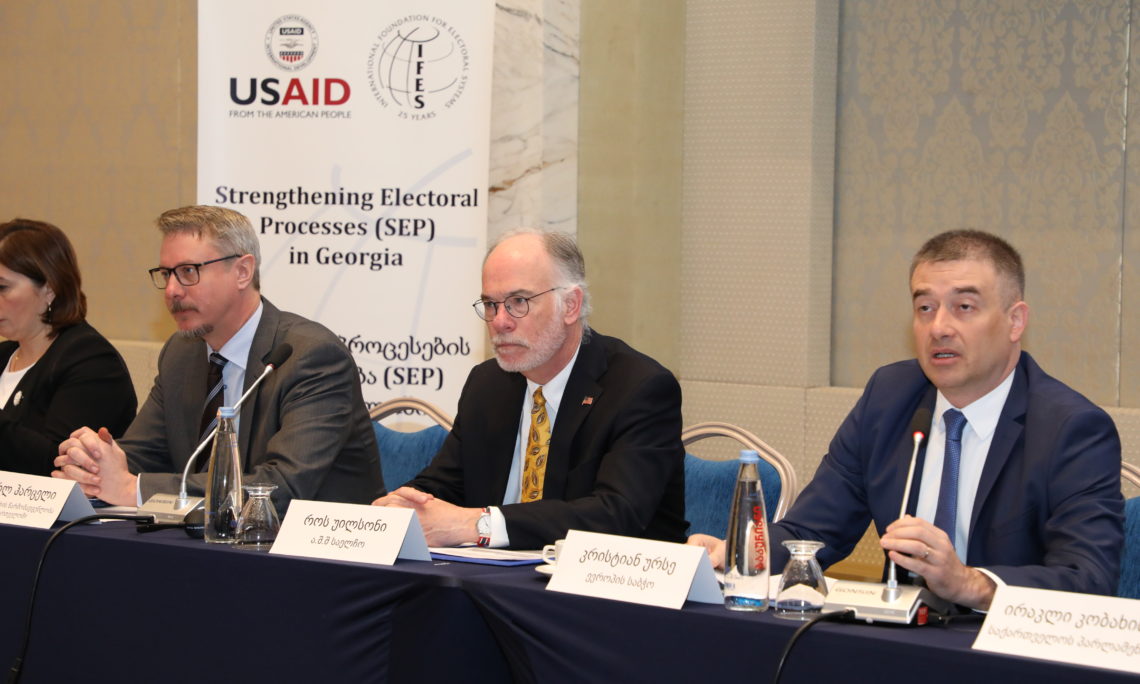 Good morning.  It is a pleasure and honor to be here and to represent the United States at this periodic conference.

I want to thank all of you who are here and the other organizations that are represented here from the political parties and the non-governmental organizations, those along parliament here that represent the backbone of Georgia’s democratic institutions. I also want to recognize my friends, Parliamentary Speaker Kobakhidze, Justice Minister Tsulukiani, Chair of Central Election Commission, as well as Ambassador Hartzell, Ambassador Ahrens.

Strengthening democracy has always been at the heart of American policy in this country, of course of its nearly three decades of independence. And these periodic gatherings after elections has been important to work on those issues.  On matters pertaining to elections and democracy, there are two quotes that I come back to from time to time. One is a famous remark by Winston Churchill who described democracy as the worst form of government – except for all the alternatives. Parliamentarians and civil society representatives know exactly what Churchill meant about that worst part: democracy is contentious, frustrating, often fails to produce results, and can usually do so only through a compromise that often has issues as well.  Democracy relies on a shared belief that whatever the politicking, posturing, and convictions that may exist, everyone gives priority to maintaining free and competitive institutions, to open debate, to acceptance of, or at least respect for, the results these institutions produce through proper deliberations and of course through the ballot box. That culture of democracy is critical; even where it is strong, there are problems and we can observe those in the West. More needs to be done here to strengthen that culture of democracy through the law, its implementation, and especially all sides’ respect for the rights, prerogatives, and potential wisdom of others.

The other quote I like is that of Soviet Foreign Minister Molotov, who said that “the trouble with free elections is that you don’t know how they are going to turn out.”  Some of you have run for election, elected office, you know about that. Molotov, of course, was talking about East-Central Europe; we know what the Soviet Union had in mind. Democratic values require a different approach.

Georgian citizens, that I have observed in election monitoring, do this instinctively. I’ve been struck in 2016 and 2018 how people take seriously their right to vote, how they care about the outcome – both the literal outcome but also how, the how to piece. Which is why we are here today.

These are Georgians’ concerns. They’re reflected in polling by the International Republican Institute that shows declining public confidence in elections and electoral administration. Left unaddressed, this could poison democracy. Efforts are needed now to reverse this trend. And I hope today’s discussions will take place against that backdrop.

The challenge is, to be honest with one another about what works, and many things work very well in elections and in the democratic system of this country, but also to reflect on where the real problems are, to critically assess the situation, to ask not simply whether electoral events and processes narrowly adhered to the law, but did what happen add to, or subtract from, the public’s confidence in elections and in Georgian democracy.

You have many reports and many recommendations. Five sets of issues seem important to us.

First, Georgia should improve campaign and political party finance laws and regulations to ensure a more equitable distribution of resources and to increase transparency and oversight.

Second, this country should strengthen the regulations, practice, and ethics about what we euphemistically call the “use of administrative resources” at election time.  What constitutes acceptable and unacceptable behavior should be clearer, and protections for civil servants should be strengthened, especially for teachers. And I think everyone here knows why.

Third, to ensure the impartiality of electoral commissions on which well-respected elections depend, find a way to better balance political representation on commissions at all levels and to exclude individuals from them when the potential or appearance of a possible conflict of interest exists.

Fourth, address the problem of voter intimidation. Take effective action to ban vote “coordinators” and bullies that hang around outside election precincts, get rid of fake “observers,” and better educate voters about what is acceptable and not. So that they can express their views when issues arise.

Fifth, simplify the dispute resolution process so that those making complaints actually believe their concerns are being addressed fairly and impartially.

Civil society is an important component of any democracy – it is the expression of freedom that citizens have to coalesce into groups and to critically assess their government, to address societal issues, to address whatever interests them. The non-governmental organizations represented at today’s conference and that exist throughout Georgia are the antithesis of the totalitarian rule this country suffered under for seventy years.  I went to the museum of Soviet Occupation yesterday. Protecting this democratic institution, civil society, will also be a barometer of Georgia’s success as a democracy in the success of its elections. For their part, civil society organizations have a solemn responsibility to be impartial, to respect the responsibilities of other democratic institutions, and to help move the country toward constructive compromise. In that connection, we support the idea of an inclusive working group that includes parliament, relevant government institutions, and civil society to follow up this conference on specific measures and next steps that flow out of this exercise.

Time is urgent. Best practice suggests that legal changes to an electoral system should be in place one year prior to an election. Georgia has approximately seven months before that one-year timeline. 2019 should be the Year of Electoral Reform. We believe it should start today.

For its part, the United States will continue strongly to advocate for and support democracy.  Georgia’s success and the success of its elections and its democratic institutions will be important to our relationship, to Georgia’s Euro-Atlantic integration, and for its prosperity, security, and future as a successful country.