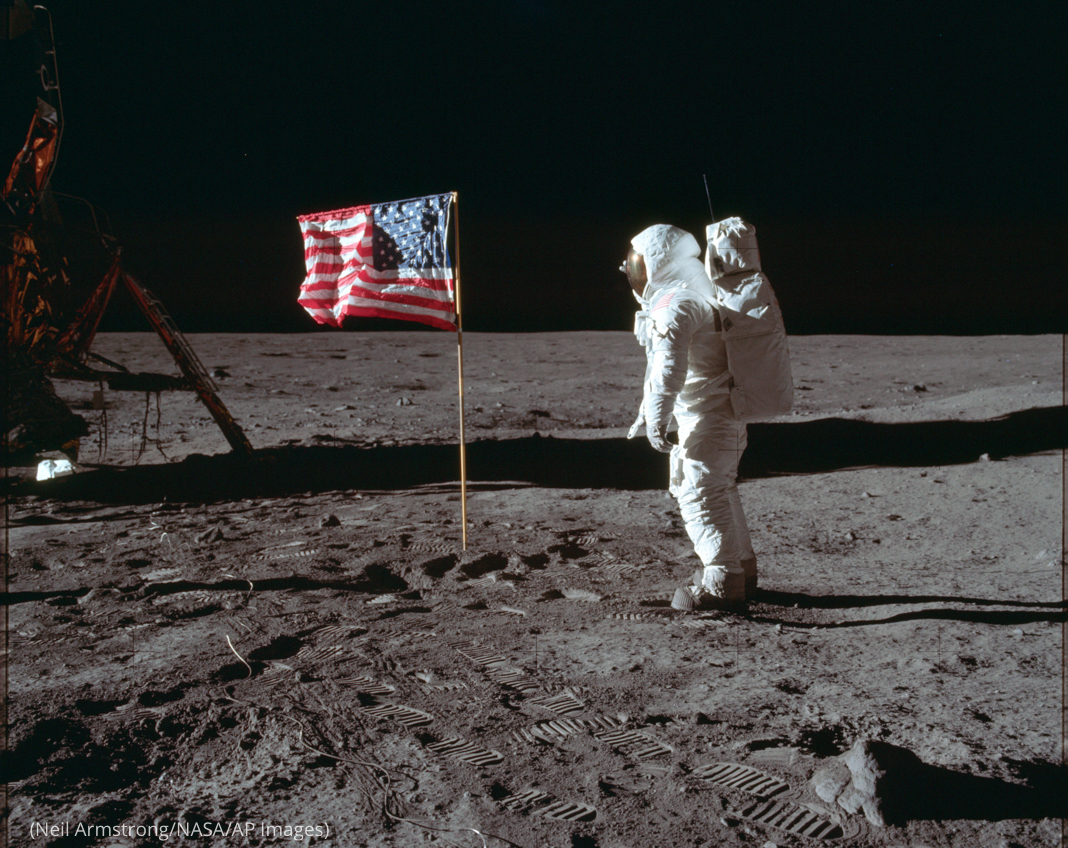 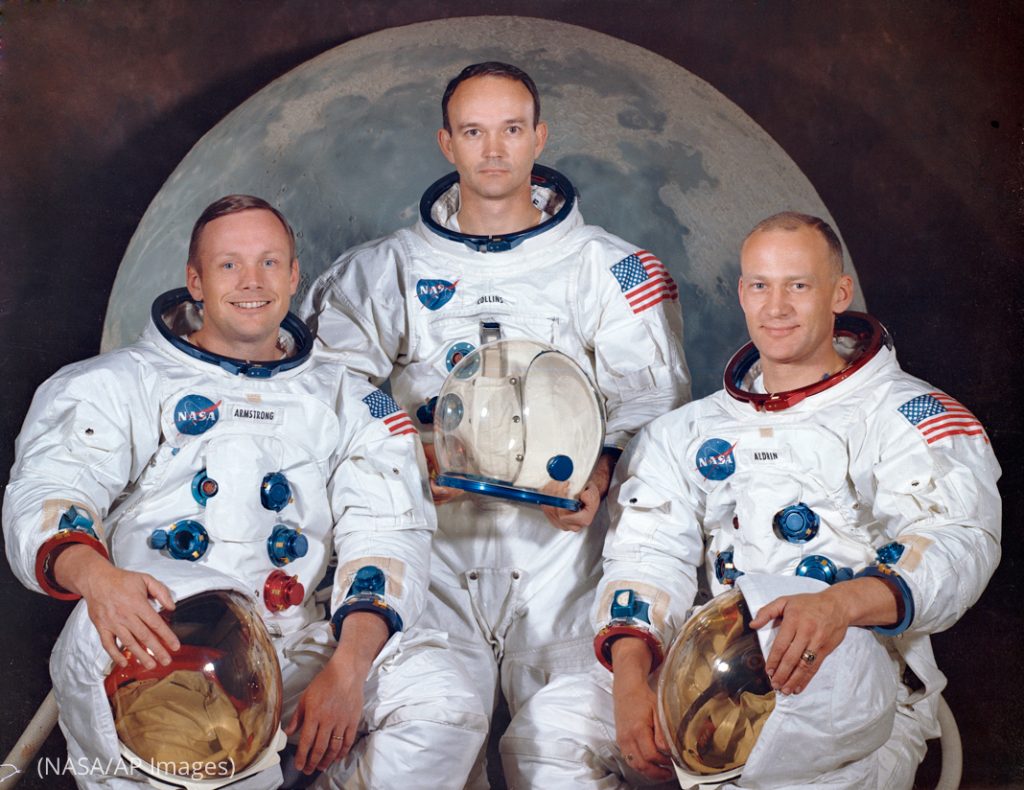 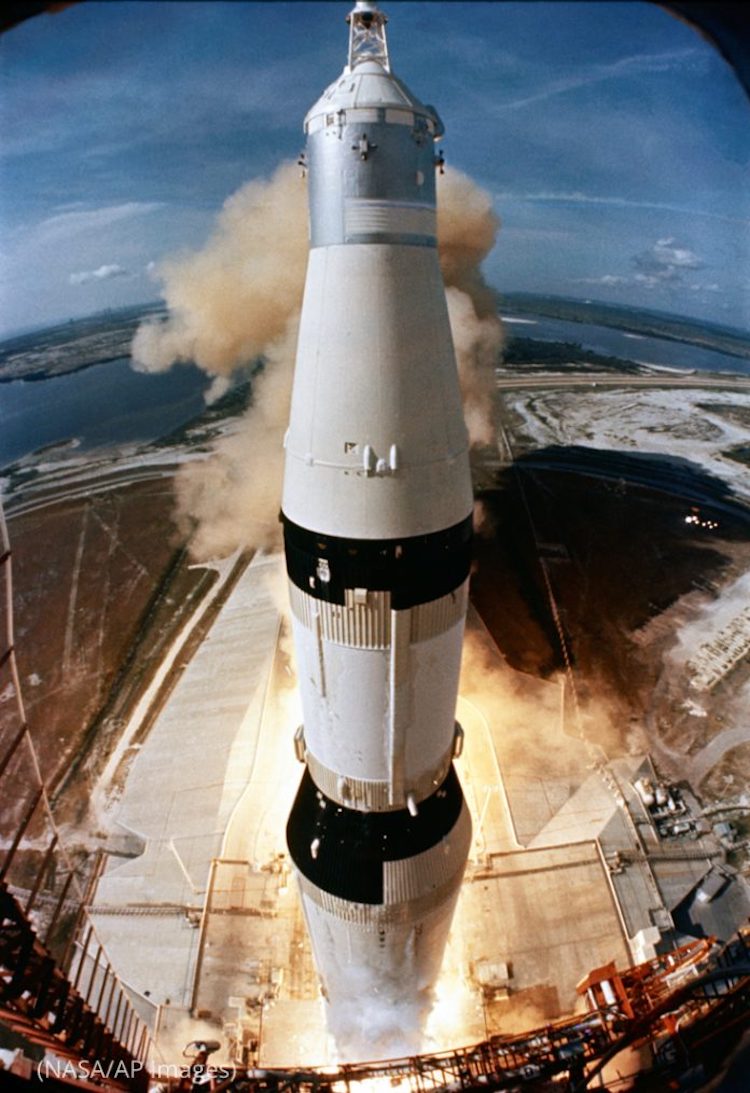 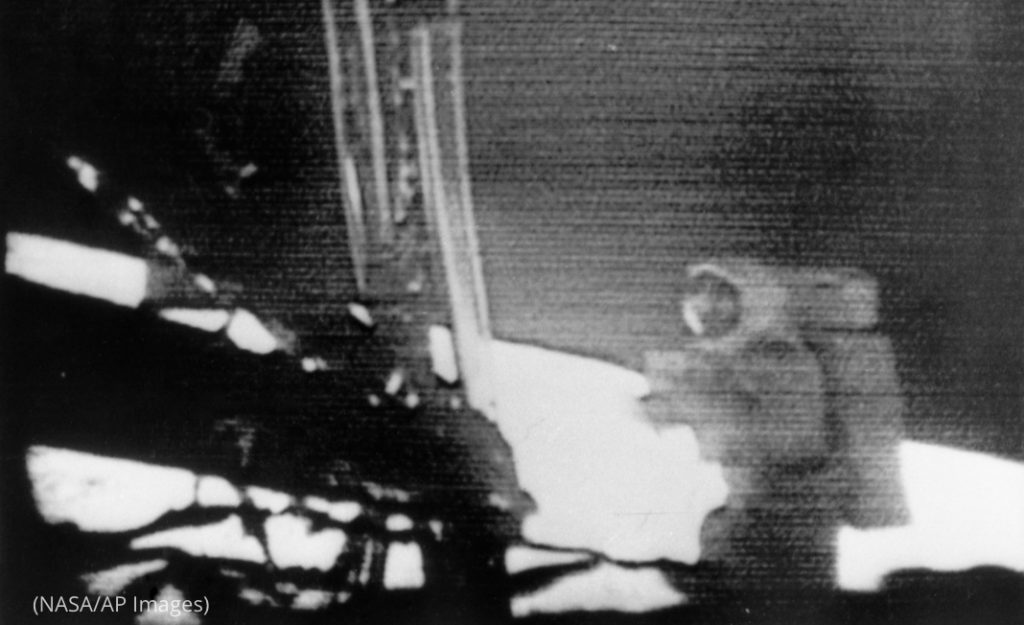 In this July 20, 1969 photo made available by NASA, astronaut Buzz Aldrin Jr. poses for a photograph beside the U.S. flag on the moon during the Apollo 11 mission. Aldrin and fellow astronaut Neil Armstrong were the first men to walk on the lunar surface with temperatures ranging from 243 degrees ab

Neil Armstrong, waving in front, heads for the van that will take the crew to the rocket for launch to the moon at Kennedy Space Center in Merritt Island, Florida, on July 16, 1969. (© AP Images)

Left: The Chicago Cubs (foreground), Philadelphia Phillies and fans in attendance bow their heads in a moment of silent prayer in Philadelphia on July 20, 1969, hoping for the safe voyage of the Apollo 11 mission to the moon. (© Bill Ingraham. AP Images)/Right: Berliners stand in front of a TV shop

“That’s one small step for man, one giant leap for mankind,” said astronaut Neil Armstrong as he became the first human to set foot on the moon, as shown in the image from television. (NASA/AP Photo)

Left: Buzz Aldrin leaves a footprint on the moon’s Sea of Tranquility. Photographs of the footprints were actually part of a planned experiment by Aldrin to study the nature of the lunar dust and the effects of pressure on the surface. (Buzz Aldrin/NASA/AP Images) Right: Neil Armstrong took this

Left: This photo of Earthrise over the lunar horizon, taken July 20, 1969, from the orbiting command module, is one of the most famous images captured by the space program, although even the astronauts cannot remember who actually took the photo. (NASA) Right: After lifting off from the lunar sur

Left: The three astronauts and a Navy frogman, all wearing biological isolation garments, awaiting helicopter pickup and transport to the USS Hornet after the lunar module splashed down about 1,504 kilometers southwest of Hawaii at 16:50 UTC on July 24, 1969. They stayed in quarantine for three week