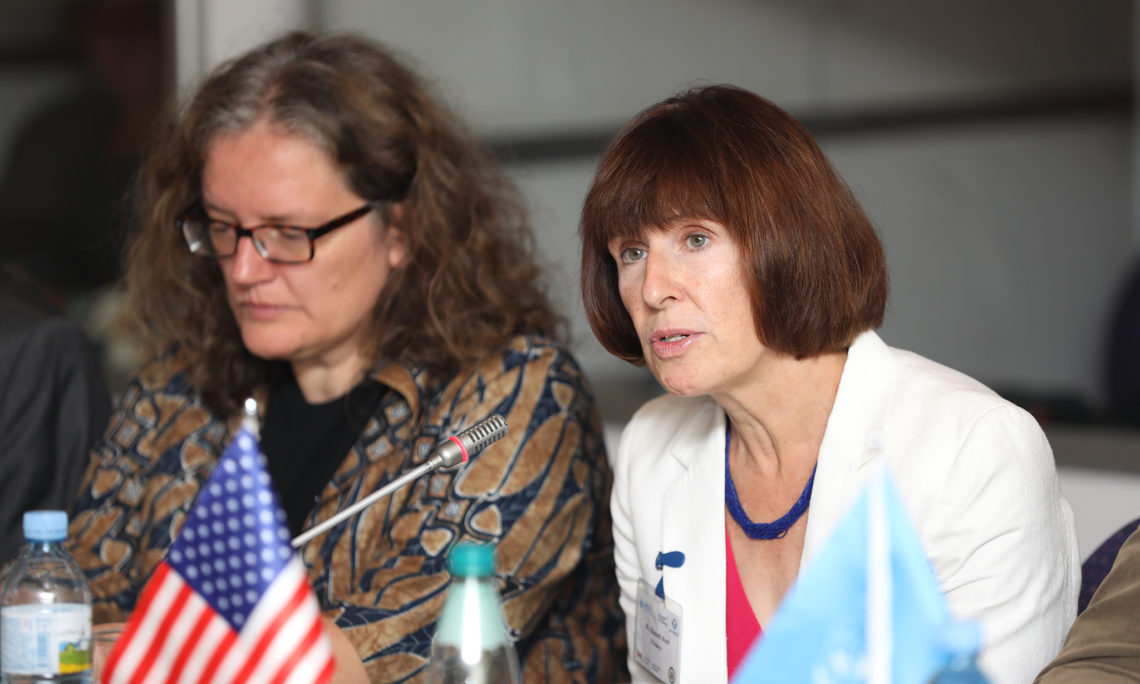 Charge d’Affairs Elizabeth Rood: The United States Embassy in Tbilisi is very pleased to be a sponsor of the 2nd Black Sea Regional Steering Committee of the Container Control Program of the World Customs Organization and the UN Office on Drugs and Crime. This is a very important program, because it assists countries around the world, and specifically here in the Black Sea region, to protect their national borders from the illicit transfer or export of illicit materials of all kinds, whether that be narcotics or cigarettes or weapons or materials that could be used to produce weapons of mass destruction, radioactive materials, as well as international organized criminals and the materials that they smuggle. We would like to particularly thank the government of Georgia for being the host country and also point to the very important successes that the government of Georgia has had working with the Container Control Program to interdict large amounts of illicit materials, including narcotics and radioactive materials.

Charge d’Affairs, Elizabeth Rood: The United States is very concerned about the recent developments along the Administrative Boundary Line with South Ossetia, specifically the events in the area of Chorchana. We call for the Russian and South Ossetian sides to take all necessary steps to de-escalate the situation, and we call on all parties to use the existing mechanisms through the European Union Monitoring Mission, the hotline and so forth, to ensure that the situation remains calm and stable and again, we call on the Russian Federation to fulfill its obligations under the 2008 Ceasefire Agreement to withdraw its forces to pre-conflict positions. I would also like to add that we are deeply concerned about the closure of the crossing points of the Administrative Boundary Line which is causing very severe humanitarian consequences for the residents of the region, and we call on the de facto South Ossetian authorities to reopen those Administrative Boundary Line crossing points immediately.

q-n about Alliance of Patriots demonstration in front of the U.S. Embassy

Charge d’Affairs, Elizabeth Rood: I don’t wish to comment on specific messages of the Alliance of Patriots party and the protest action that they organized on Sunday. But I would express appreciation to the government of Georgia in that they allowed the freedom of expression and freedom of assembly for all Georgian citizens, including every political party.