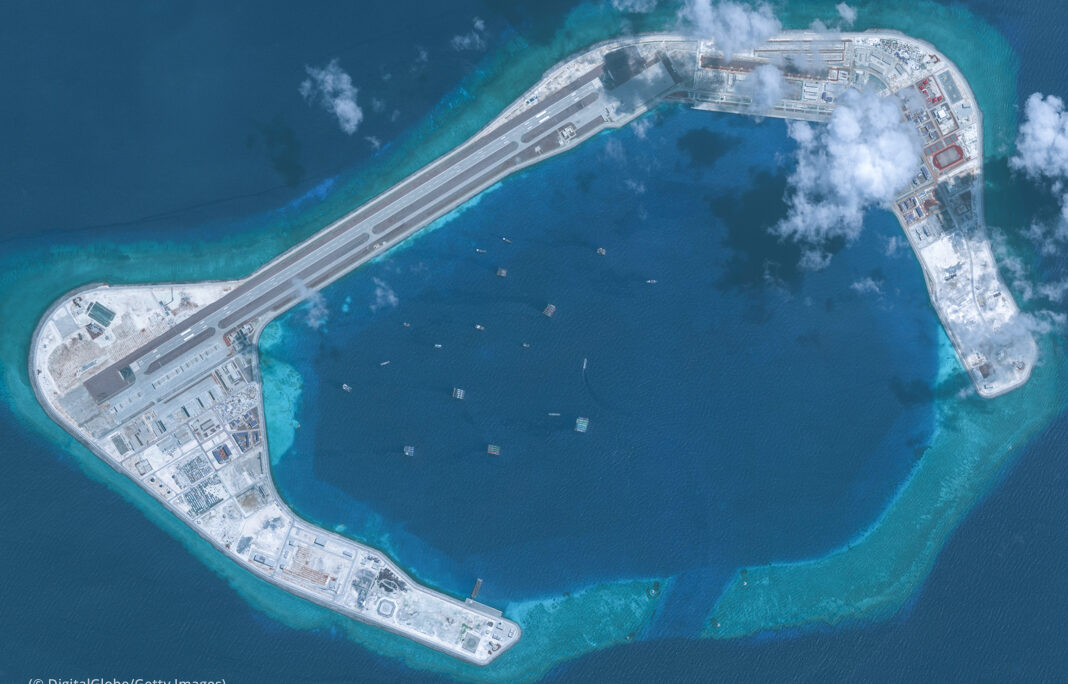 SUBI REEF, SOUTH CHINA SEA - MAY 28, 2018: DigitalGlobe via Getty Images imagery of the Subi Reef in the South China Sea, a part of the Spratly Islands group. (© DigitalGlobe/Getty Images)

Construction firms owned by the People’s Republic of China are harming the environment and threatening the economies and sovereignty of nations worldwide.

“CCCC and its subsidiaries have engaged in corruption, predatory financing, environmental destruction and other abuses across the world,” Secretary of State Michael R. Pompeo said August 26. “The PRC must not be allowed to use CCCC and other state-owned enterprises as weapons to impose an expansionist agenda.”

Five CCCC subsidiaries are among the two dozen PRC state-owned companies that the U.S. Department of Commerce sanctioned August 26 for building military outposts in the South China Sea that trample sovereignty and damage the environment.

The United States, China’s neighbors, and the international community have rebuked the CCP’s sovereignty claims to the South China Sea and have condemned the building of artificial islands for the Chinese military. https://t.co/kr22G2zflU

The Department of Commerce added the CCCC subsidiaries to its Entity List, which precludes companies from buying American-made components without U.S. government permission.

The U.S. has said the PRC’s maritime claims in the South China Sea infringe on the rights of other nations. The Department of State will begin blocking executives of the state-owned companies responsible for PRC militarization of the region from entering the U.S.

The devastation wrought by CCCC extends beyond the South China Sea. As leading contractors for One Belt, One Road, CCCC affiliates have faced accusations of everything from bribery and low-quality construction to worker exploitation. Backed by the Chinese Communist Party, CCCC regularly underbids all competitors and is not held to international standards of transparency or accountability by the PRC.

The World Bank in 2009 barred the CCCC from its road and bridge projects for eight years after finding fraud in the bidding process for a road project in the Philippines.

It’s a familiar story. Bangladesh in 2018 banned the China Harbour Engineering Company, a CCCC subsidiary, for trying to bribe a government official to obtain favorable terms on a major road project.

The same year, the Malaysian government halted a CCCC railroad project amid investigations of corruption and overbilling, according to Bloomberg.

Labor representatives in Kenya have accused another CCCC subsidiary, the China Road and Bridge Corporation, of paying Kenyan locomotive operators less than one-third of what their Chinese counterparts earn. The company is running a railway on a 10-year contract.

In Ecuador, a CCCC affiliate was contracted to build a center for advanced technology education in 2014, but local news outlets reported that after years of construction, more than 80 percent of the campus facilities are unusable due to structural failures.

The PRC’s state-owned companies also have invested billions in ports worldwide to gain access to critical waterways, according to 2017 report by C4ADS, a nonprofit based in Washington that focuses on security issues.

A CCCC subsidiary built the port of Hambantota in Sri Lanka. When the Sri Lankan government could not repay loans owed to Beijing, the government transferred control of the port to a PRC company on a 99-year lease.

In recent interviews, Pompeo has said countries are waking up to the risks of doing business with the Chinese Communist Party and its state-owned companies.

Many One Belt, One Road projects may look good at the outset, Pompeo said during a July 9 news conference. But countries soon find out that “the commitment that the Chinese Communist Party made to deliver, whether that’s on a road or a bridge or on an infrastructure project like a dam, it turns out that they were often sold a true bill of goods.”