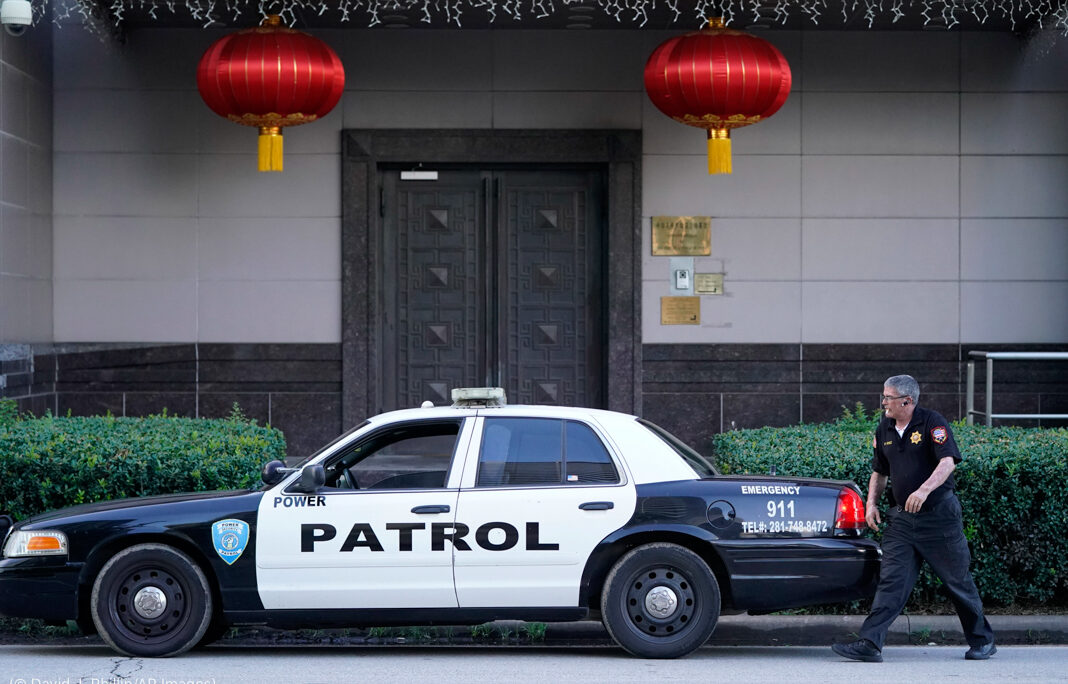 A security guard walks behind his patrol car outside the Chinese Consulate General Wednesday, July 22, 2020, in Houston. Houston police and fire officials responded to reports that documents were being burned in the courtyard of the consulate Tuesday night, according to the Houston Police Department

The Chinese consulate in Houston, Texas, “was a hub of spying and intellectual property theft,” said U.S. Secretary of State Michael R. Pompeo.

The July 23 closure of the consulate is part of U.S. efforts to push back against the Chinese Communist Party’s violations of U.S. sovereignty. The United States has rejected the “blind engagement” that has allowed the CCP to take advantage of other countries.

Countries operate consulates and embassies “with the consent of the host nation,” Pompeo explained in an interview July 23. “It’s not okay to use your diplomats to engage in industrial espionage, it’s not okay to steal intellectual property.”

Though the People’s Republic of China has engaged in extensive illegal activities and influence operations throughout the United States, the consulate in Houston was a particularly aggressive source of malign activity, according to a briefing by senior U.S. government officials.

CCP agents working out of the consulate helped People’s Liberation Army officers “evade and obstruct” law enforcement to illegally conceal their military affiliations while operating in the United States, according to the officials.

According to the briefing, the consulate was directly involved in fraud and stealing U.S. intellectual property from research institutions and companies in Texas.

The CCP uses its consulates to intimidate and harass U.S. and Chinese nationals living in the United States.

Through their so-called Fox Hunt teams, Beijing targets political rivals of General Secretary Xi Jinping, critics of the Communist Party, or refugees, such as Uyghurs and other oppressed minorities. The goal is to force these people to return to China, a Justice Department official explained.

In one instance, according to a senior U.S. intelligence official, a consulate official in Houston tracked down someone living in the United States and tried to get him to return to China by claiming his father wanted him to return.

In a speech to the National Governors Association, Pompeo described how the Chinese government pressures Chinese students to monitor their fellow classmates and report back to the CCP.

Chinese students studying in America “shouldn’t have to fear the long arm of Beijing,” he said.

“The Chinese Communist Party is here working to influence and undermine our democracy,” Pompeo said in an interview explaining the closure of the consulate. “We can’t let it happen.”