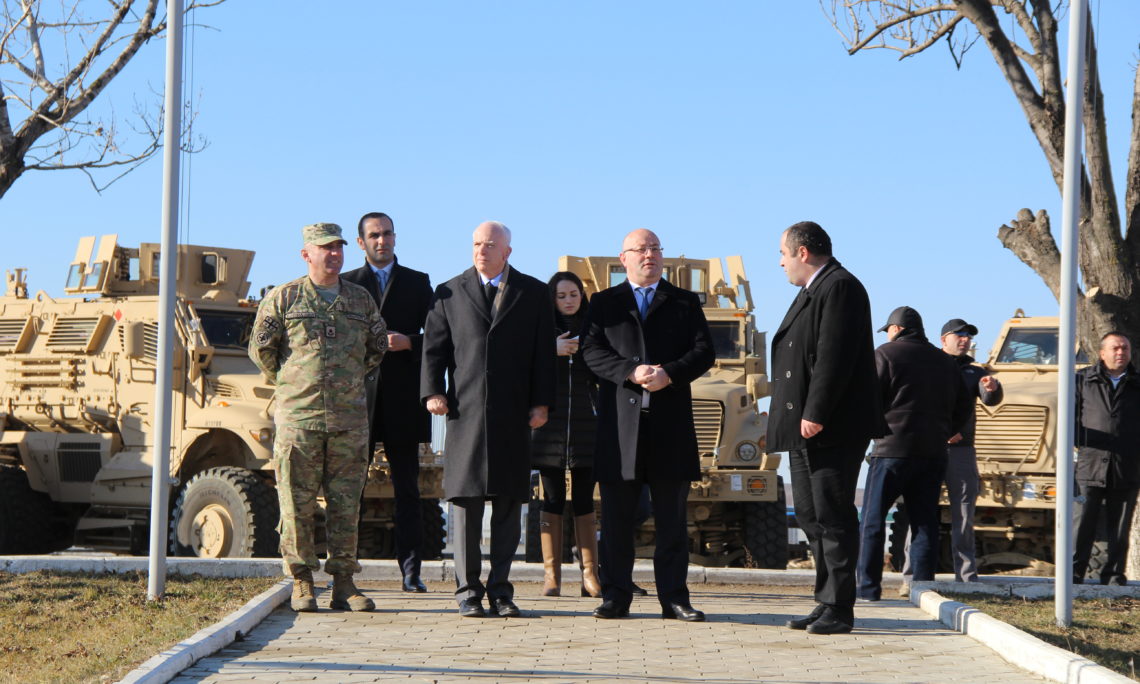 Sen. McCain: Senator Graham, Senator Klobuchar, and I, a bipartisan delegation, are here to express our support and appreciation for the Georgian military and people who have joined us in Afghanistan, who are serving with us, training with us, and defending the freedom of the American people as well as the Georgian people. Vladimir Putin has illegally annexed part of this country and some day Georgia will be free and whole and independent again. And, we are honored to be here with these brave soldiers, both American and Georgian, who are serving their country with honor and distinction.

Sen. Graham: I think it is very important that the Georgian people appreciate these soldiers. They are going to Afghanistan, not to take anything from the Afghans, but to give them the ability to be free. These Georgian soldiers also fight for the freedom of people of Georgia. The Marines here today are the best we have to offer. This partnership, I hope, will get stronger overtime. Our message is that 2017 will be a year of more: more American support, more American military support, more trade, more economic integration, and more push back against Russia for the aggression, not only here but throughout the world, more sanctions. Now is the time to let Putin know that we as a world have had enough, and Georgia is the centerpiece of this strategy. It is this small country that has decided to be free and lives in the shadow of a very tough neighborhood. I hope and wish that 2017 will be a year of more democracy, more economic progress, and a better relationship between the United States and the people of Georgia.

Sen. Klobuchar: This is the first time we have a sunny day since we arrived in Eastern Europe, and cannot think of anything more fitting than the sun shining on the New Year and on this country, which with the soldiers we see today working with our own Marines, have fought so bravely and stood up for the democracy. And we want you to know that America has your back and that we know you have the back for democracy, not just in Georgia but all over the world. We have seen an unprecedented intrusion in an American election by Russian cyber attacks in the last year and we are going back and telling our colleagues in the incoming administration that this was not something unique in one election in America or one political party or even one country, that you have seen this move before in Georgia and they have seen it in Estonia, Lithuania, and Ukraine. And, it is very important that the democracies of the world stand up together, and we thank Georgia for your bravery and courage.

Sen. Klobuchar: [inaudible] … So, I grew up in a reporter family and value the First Amendment, and freedom is about having a free press. When you have a press that is suppressed and are not able to investigate things and ask questions, then you cannot have a true functioning democracy and we certainly know that in the United States. As a politician you do not always like when they ask a tough question but it is important, and we know that there are issues in Georgia. I am not going to get into all the details but we also stand here to stand up for free media.

Sen. Klobuchar: Yes, we brought this issue up at all our meetings.