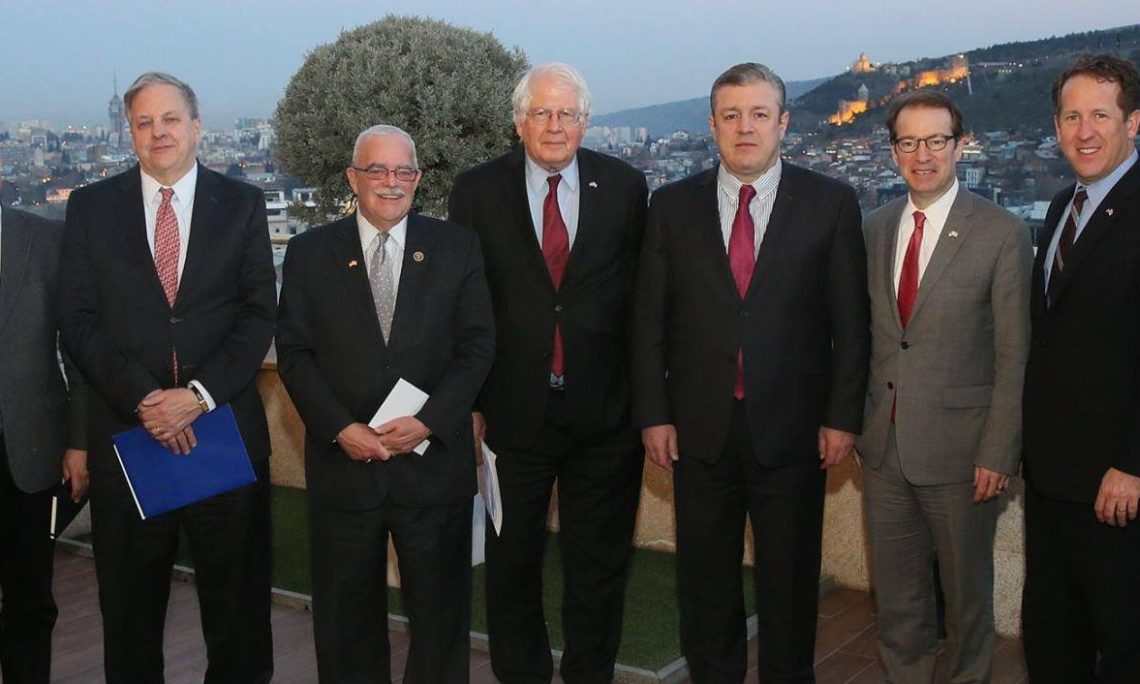 CODEL Roskam is visiting Georgia as part of the House Democracy Partnership (HDP).  The HDP and Georgian Parliament have been working together since 2006, and this trip marks the 7th visit by commission members to Georgia.  While here, the delegation is meeting with legislative counterparts to discuss legislative methods, challenges, and current issues.
Delegation Members:  HDP Chairman Congressman Peter Roskman, Congressman David Price, Congressman Gerry Connolly, and Congressman Adrian Smith

Congressman Roskam: Thank you Mister Chairman for your hospitality today.  On behalf of the American delegation we are very pleased to be here.  My name is Peter Roskam, and I am Chairman of the House Democracy Partnership.  We are a bipartisan delegation of the United States House of Representatives.  I know that the Chairman has introduced our delegation but I would like to do it again: David Price from North Carolina, Adrian Smith from Nebraska, and Gerry Connolly from Virginia.  We are here today to communicate a very clear message, and that is a commitment from the United States Congress on a bipartisan basis to the territorial integrity and sovereignty of Georgia as a nation.  Georgia is a good news story: the admiration that we have for the people of Georgia and the decisions that they are making in moving forward in a very tumultuous area in the world.  We recognize that there are pressures from authoritarian regimes right on your border, and the decisions Georgia is making to move forward and maintain democratic principles and continue interest in integrating into western-style democracy is a very significant and powerful thing.  We are here as partners, we are here as friends, and we are here to reiterate that level of commitment.  And also, it needs to be said and acknowledged that we greatly admire and appreciate Georgia’s commitment to military operations around the world, particularly in Afghanistan.  It is not lost on us that Georgia has suffered as a result of joining with Western forces in fighting terror, and yet Georgia steps up time and time again.  We are deeply appreciative and acknowledge that.  I would like now to introduce my friend and colleague, the gentleman from North Carolina, Mr. Price.

Congressman Price: I want to thank our chairman Mr. Roskam, the Chairman of the Parliament, and his colleagues who have just met with us and had a very enlightening and helpful discussion about what is happening in Georgia since our last meeting, which was not even two years ago.  But there has been lots of change: of course a major election and a new parliament, and a good deal of activity moving towards constitutional changes and legislative changes that are important for this country.  So, our concerns since the House Democracy Partnership Cooperation was established ten years ago, our concern has been to exchange ideas, exchange best practices.  We have had dozens of Georgian Members of Parliament visit our country.  We have been here, I think, six times.  We work with the staff and we work to build up the Parliament because our view is that although free and fair elections are absolutely critical to democracy, what happens between elections is just as important: namely the functioning of representative institutions, which work effectively to reflect the popular will, but also to reflect diverse interests, to give voice to minorities, to opposition, to integrate all this into national policy that is legitimate and that moves Georgia forward.

Our country has great, great admiration for this country, for the struggles that you have undergone for many years, for the support you have shown for our military operations—our joint interests in Afghanistan in particular, with 31 Georgian lives lost in that conflict.  We are very much aware of that.  We are aware of the aspirations of Georgia towards European and Western integration, the joint activities with our military and with NATO military, the recent granting of visa free travel in Europe—a wonderful achievement.  These things come one step at a time.  But we are aware of the aspiration of Georgia to have friendly relations with us, supportive relations, and towards being a fuller part of Europe.  We share those aspirations, and we share them on a bipartisan basis.  We’ll go home renewed in our determination to tell our colleagues and constituents of the progress that’s been made in this part of the world and of our country’s commitment to Georgian integrity, Georgian sovereignty, and Georgian democratic development.  Thank you so much.