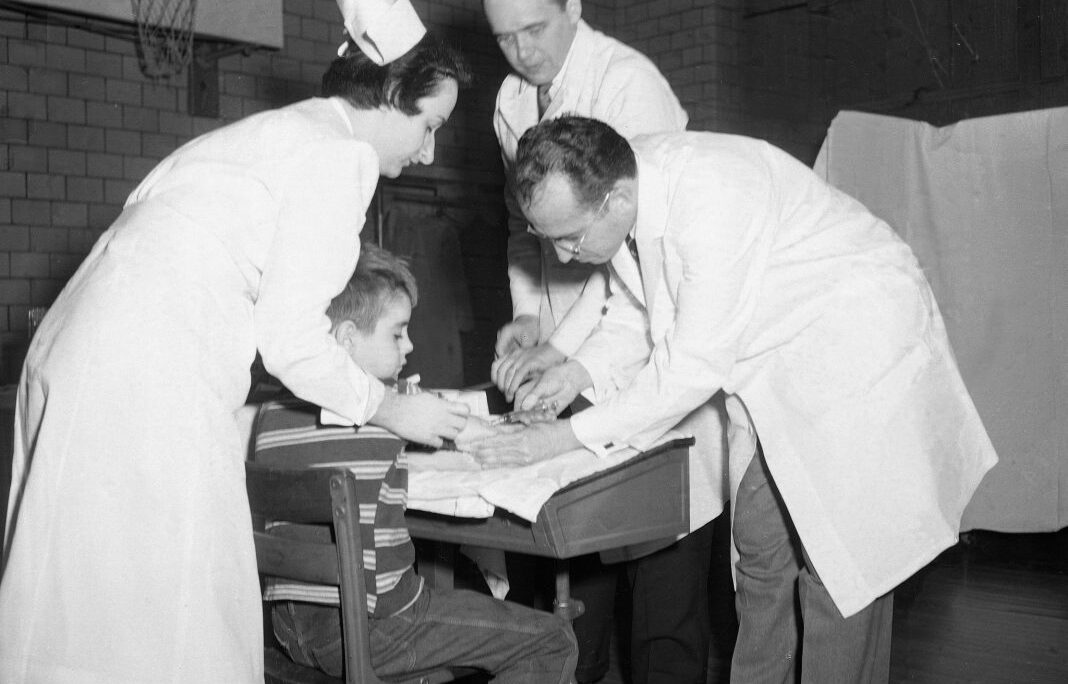 Dr. Jonas Salk, who developed the first polio vaccine, administers an injection at an elementary school in Pittsburgh on February 23, 1954. (© AP Images)

U.S. research is responsible for vaccines that protect the world’s citizens from deadly infectious diseases like yellow fever, measles and polio. In addition, the U.S. continues to invest billions worldwide to combat HIV/AIDS.

Lessons learned from these U.S. scientific breakthroughs are aiding efforts to rapidly develop a safe and effective vaccine to fight the COVID-19 pandemic. For example, some research has focused on developing a potential COVID-19 vaccine based on an existing measles vaccine.

In addition, U.S. investments in global health programs, including through the U.S. President’s Emergency Plan for AIDS Relief (PEPFAR) and the Global Health Security Agenda, have built international partnerships that are now supporting the global response against COVID-19.

“There is no nation that has been or will be as deeply committed to delivering vaccines all around the world as the United States of America,” Secretary of State Michael Pompeo said on September 2, regarding U.S. efforts to discover a safe, effective COVID-19 vaccine.

The U.S. government has allocated $20.5 billion to the global fight against the disease, including billions for vaccine research.

Those efforts build on the historic achievements of scientists working in the United States on the global fight against infectious diseases.

Yellow fever afflicted people for centuries, yet no one knew its cause or how to stop it. Millions suffered from its symptoms, including bleeding, organ failure and sometimes death.

In 1900, U.S. Army surgeon Walter Reed led a commission that discovered that mosquitoes transmit the virus that causes yellow fever. The breakthrough allowed scientists to study the virus. In 1937, Max Theiler, a South African working at the Rockefeller Foundation in New York, developed a yellow fever vaccine using chicken embryos.

The vaccine is still in use today and has inoculated hundreds of millions of people.

Polio paralyzed hundreds of thousands of children annually before Jonas Salk, an American physician, medical researcher and virologist, developed a vaccine in the 1950s.

The Roosevelt Foundation tested the effectiveness of Salk’s vaccine in observed control trials across the United States, in which more than 1 million schoolchildren participated. Based on the positive results of those trials, the vaccine was licensed for use in the United States on April 12, 1955.

In 1988, the United States helped launch the Global Polio Eradication Initiative. And since the 1990s, the U.S. Congress has invested hundreds of millions of dollars to fight polio worldwide, contributing to a more than 99 percent drop in cases worldwide between 1988 and 2013. In 2020, Africa announced that it was free of wild polio.

John Enders, an American biomedical scientist, developed a vaccine for measles in 1963. The disease had killed an estimated 2.6 million people worldwide each year.

Five years later, in 1968, Maurice Hilleman improved the measles vaccine, developing a version still used today. By 2018, annual measles deaths globally had dropped to 142,000, according to the U.S. Centers for Disease Control and Prevention.

Hilleman went on to develop more than 40 vaccines, including for mumps, hepatitis A, hepatitis B, meningitis, pneumonia and rubella.

The U.S. launched PEPFAR in 2003, the single largest commitment by any country to tackle a single disease in history. Through PEPFAR, the U.S. has invested more than $85 billion in the global response to HIV infections. This effort has saved at least 18 million lives, prevented millions of infections and accelerated progress toward controlling the epidemic in more than 50 countries.

Dr. Nelson Michael, director of the Center for Infectious Disease Research at the Walter Reed Army Institute of Research, helped launched PEPFAR and has helped in the development of vaccines for Ebola and Zika. He is now working on vaccines to protect against HIV and the COVID-19 virus.

“We made a big impact,” Michael said of PEPFAR. “People are alive today. And they’re thriving.”