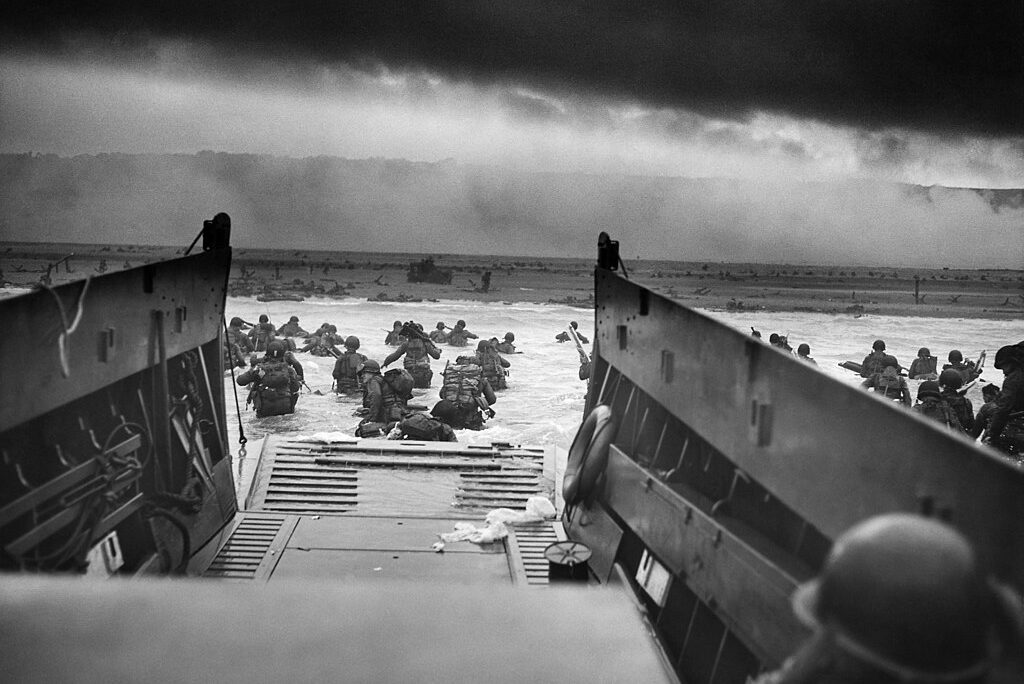 The photograph Into the Jaws of Death shows American troops, part of the U.S. 1st Infantry Division, leaving a Higgins Boat on Omaha.

Operation Overlord was the codename for the Battle of Normandy, the Allied operation that launched the successful invasion of German-occupied Western Europe during World War II. The operation was launched on 6 June 1944 with the Normandy landings. A 1,200-plane airborne assault preceded an amphibious assault involving more than 5,000 vessels. Nearly 160,000 troops crossed the English Channel on 6 June, and more than two million Allied troops were in France by the end of August.

The decision to undertake a cross-channel invasion in 1944 was taken at the Trident Conference in Washington in May 1943. General Dwight D. Eisenhower was appointed commander of Supreme Headquarters Allied Expeditionary Force, and General Bernard Montgomery was named as commander of the 21st Army Group, which comprised all the land forces involved in the invasion. The coast of Normandy of northwestern France was chosen as the site of the invasion, with the Americans assigned to land at sectors codenamed Utah and Omaha, the British at Sword and Gold, and the Canadians at Juno. To meet the conditions expected on the Normandy beachhead, special technology was developed, including two artificial ports called Mulberry harbors and an array of specialized tanks nicknamed Hobart’s Funnies. In the months leading up to the invasion, the Allies conducted a substantial military deception, Operation Bodyguard, using both electronic and visual misinformation. This misled the Germans as to the date and location of the main Allied landings. Führer Adolf Hitler placed German Field Marshal Erwin Rommel in charge of developing fortifications all along Hitler’s proclaimed Atlantic Wall in anticipation of an invasion.

The Allies failed to accomplish their objectives for the first day but gained a tenuous foothold that they gradually expanded when they captured the port at Cherbourg on 26 June and the city of Caen on 21 July. A failed counterattack by German forces on 8 August left 50,000 soldiers of the 7th Army trapped in the Falaise pocket. The Allies launched a second invasion from the Mediterranean Sea of southern France (code-named Operation Dragoon) on 15 August, and the Liberation of Paris followed on 25 August. German forces retreated east across the Seine on 30 August 1944, marking the close of Operation Overlord.