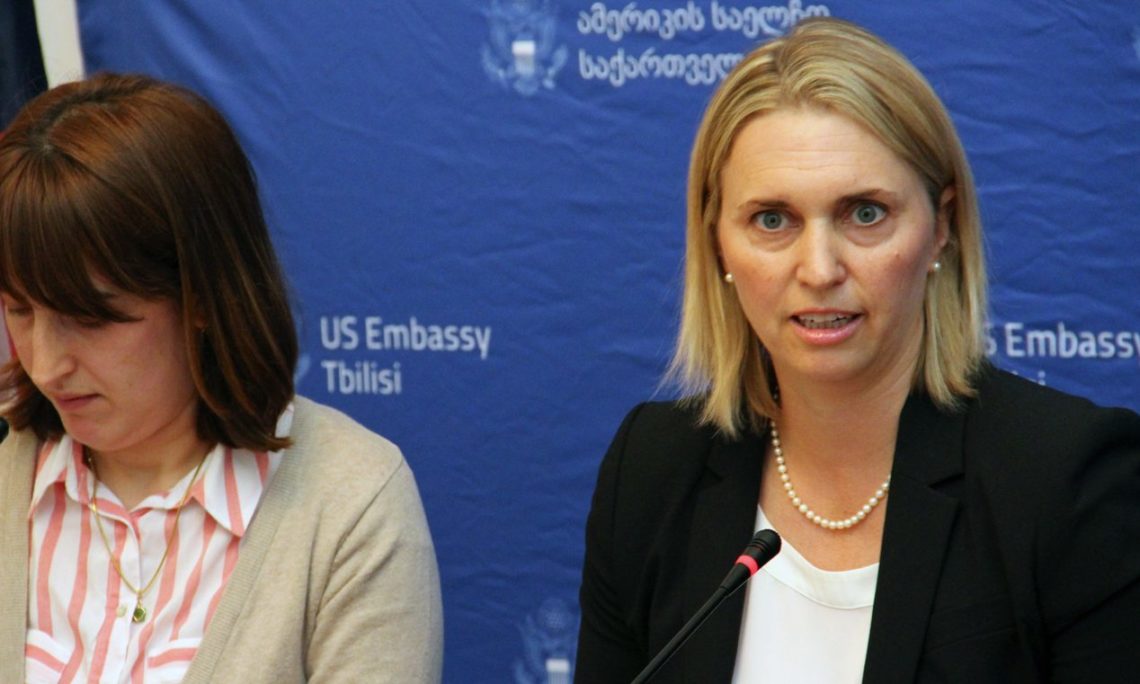 გამარჯობა!  It’s really great to be back in Georgia.  I’m just finishing up a few days visit here where I have met with a broad spectrum of people inside and outside the government, including the Prime Minister, President, the Foreign Minister, Speaker of the Parliament, and some of the chairs of the parliamentary committees, the opposition, civil society, and business.  I congratulated the Prime Minister and the government on the Georgian Dream’s win in parliamentary elections.  In my meetings, I also affirmed bipartisan support in America for Georgia.  And in all my meetings, I think together we affirmed and underscored our bilateral support for Georgia’s Euro-Atlantic integration.  In my discussions with the government, and specifically with the Prime Minister, which were excellent and open, we talked about the way ahead for Georgia and ways the United States can support Georgia.  He talked about his support and focus on the economy and economic growth, and this is something the United States strongly supports.  I was very pleased to see, from my perspective as a longtime friend of Georgia, a sense of dynamism on the economic side and was really proud to attend the Ambassador’s young entrepreneur’s week event, which really showcased all of the lively entrepreneurs and good ideas, which I think we all need to support.  In my meetings, I encouraged pluralism, political pluralism, but also especially media pluralism to allow space for multiple points of view.  I also offered, from at least our U.S. perspective, and supported efforts for the government and the parliament and those in the ruling party to reach out and join forces with others that may be outside of government, and in the opposition in parliament, and even outside of government, to support shared strategic interests for Georgia, including Euro-Atlantic integration.  So, with that thank you for coming out this afternoon and I would be happy to take your questions.

I want to say a couple things.  Number one, in America, we have one President at a time.  So, we still have President Obama up until January 19, and on January 20 we will inaugurate our new President-Elect, President-Elect Trump will start office.  At this period in time, we are in what we call a transition period, which means we are both supporting the policies that are in place with the current administration, but also helping to prepare the next administration.  I can’t predict those policies, they have to be put in place, but I can say is that there has been longtime and broad bipartisan support for Georgia in both Republican and Democratic administrations, and also in Congress and also in the larger community which helps formulate our policy in America.

Q-n about Rustavi 2’s case before the Supreme Court

I would just say I can’t comment on an ongoing court decision, and in America, and I’m sure in Georgia, you can’t interfere in court decisions.  But what I can say is that the thing we are focused on is supporting media freedom and a pluralistic media environment.  And that means a media environment that allows a multiplicity of views, even views that may be critical of the government.  We are open to this at home where also as a part of our general values and an important part of democracy we support this overseas.

I don’t want to reveal the content of the conversation, but I would say this issue of media pluralism and, an example of Rustavi 2, is something that I’ve raised and that we’ve discussed as the importance of continuing media pluralism and keeping the media space open—fundamental importance to Georgia, and also to us, too.

So thanks for your questions.  I know even in our media there are a lot of questions about what the next administration will do.  What I can say is this: I cannot, and I don’t think anyone can predict what the policies exactly will be.  What I can say with regard to Georgia, and our foreign policy in general, is it’s based on our national interest, and that I personally have worked in administrations, Republican administrations and Democratic administrations, that have had the same very strong support for Georgia.  So we’re working internally now, to inform and make recommendations to the transition team, and come January 20 I think that we will start to have a better sense in terms of publicly what we can say.

Q-n about prospects for a Free Trade Agreement

I would say our current position with regard to a Free Trade Agreement is that we have been open to that possibility.  The current administration has focused on TTIP, a trade agreement with Europe, and some in the administration have mentioned that could potentially open the door for others as well, potentially that could include Georgia.  I think we have to work through our own internal process in terms of our policies and way ahead.  What I can say is that the very strong support for Georgia’s economic growth and economic success and economic prosperity will continue, and it will remain part of our agenda.  As to the specifics, as to how those come out, we’re going to have to work through where we ultimately end up.

I guess I would separate out in terms of what has been America’s longstanding position with regard to Georgia—through a reset during the Obama administration, through a warming of relations that happened during the Bush administration—my historical memory is that the relationship with Georgia remained very strong.  And so again, I can’t predict precisely how our policies will come out, but they will be done with an assessment of our national interests, and certainly for as long as I have been involved in this, in terms of working with Georgia, they have remained exactly the same.

Q-n regarding U.S. and Russia relations

I don’t want to speculate what the future might be.  What I would say is that for 50 plus years we have been a part of NATO, an organization that is foundational to U.S. security.  We have some strong, fundamental principles which we have long operated, including the importance of the non-use of force, the importance of not accepting changes of borders by force.   The importance of countries and people to be able to choose their own futures, and chose the organizations which those countries want to be a part of.  These are longstanding principles of U.S. foreign policy imbedded and ingrained in what we do and imbedded in our values, as well as our strong support for democracies around the world.  That is our history, and I think it’s imbedded in U.S. policy, but also in our institutions, in terms of the executive, in terms of Congress, in terms of the NGO community.  So I think that’s what I can say, and, of course, with any new administration we are a democracy, which means that we respect the will of the people and we will go forward based on making the recommendations that are based on our history and our values, and we’ll see where we go from there.

AMB KELLY: Well as Ms. Brink said, we’re not going to comment on an ongoing judicial process, but I think Ms. Brink encapsulated exactly what my view is.  And my view is that we want Georgian democracy to succeed, we want Georgian reforms to succeed, and an absolutely critical component of any democracy is media freedom and media pluralism.  For that reason, of course, Ms. Brink raised in a number of meetings our concern for the future of media pluralism, and we heard from all of our interlocutors that they also consider this to be important, as of course they would, because our interests are the same, we want Georgia’s democracy to succeed.