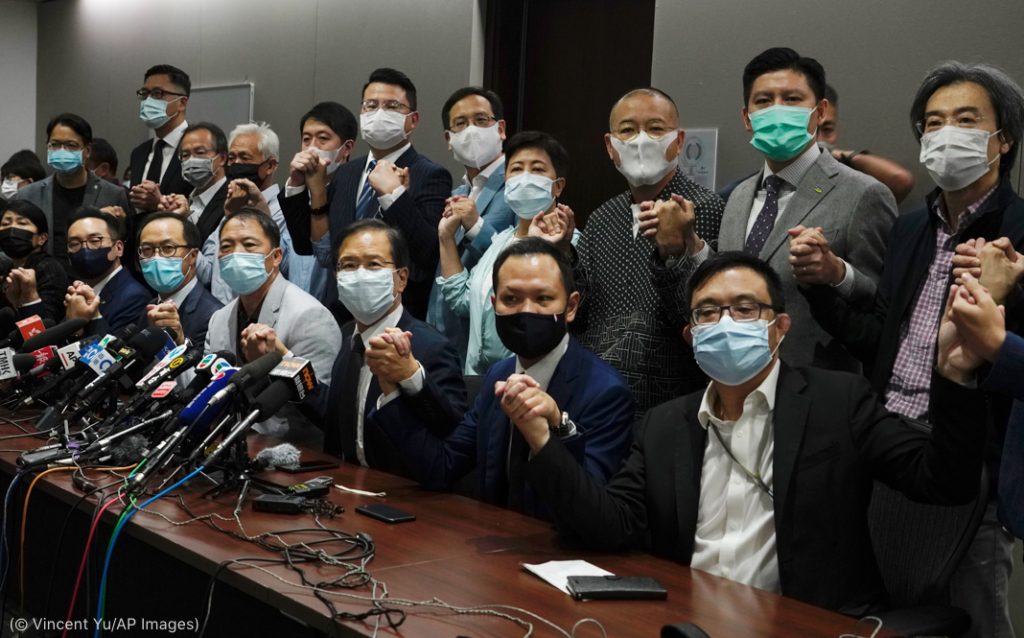 Hong Kong’s pro-democracy legislators at a news conference November 11 before announcing they would resign from the council. (© Vincent Yu/AP Images)
By Leigh Hartman

The governments of the United States, Australia, Canada, New Zealand, and the United Kingdom call the CCP’s November 11 disqualification of the lawmakers a “clear breach” of the regime’s international obligations and commitment to uphold Hong Kong’s autonomy.

“The disqualification rules appear part of a concerted campaign to silence all critical voices,” their joint statement says. “We call on China to stop undermining the rights of the people of Hong Kong to elect their representatives in keeping with the Joint Declaration and Basic Law.”

Under the Sino-British Joint Declaration of 1984, a U.N.-registered treaty, the People’s Republic of China promised to respect Hong Kong’s “high degree of autonomy” and freedoms. The Basic Law implements a “one country, two systems” principle and supports democratic institutions in Hong Kong.

The five democratic nations also call out the CCP’s other recent violations of Hong Kong’s freedoms, including the postponement of the September Legislative Council elections and the recent arrests of five sitting members of the Legislative Council.

The disqualification of elected officials is part of the CCP’s far-reaching crackdown on the freedoms it promised Hong Kong. Since the party imposed a national security law June 30, subjecting Hong Kong more directly to CCP rule, Chinese authorities have arrested democracy advocates, cracked down on reporters, and disqualified at least a dozen candidates from legislative elections.

According to the Human Rights Watch organization, requiring adherence to such vaguely worded standards violates the rule of law and the lawmakers’ right to free expression. The new law gives “the Hong Kong government arbitrary power to remove any legislator whose views it dislikes,” Human Rights Watch says.

Following the disqualification of the four pro-democracy lawmakers, 15 others resigned.

The United States in August and November sanctioned senior PRC and Hong Kong officials, including Hong Kong Chief Executive Carrie Lam, for developing and implementing the Hong Kong National Security Law and cracking down on autonomy and freedoms.

“Beijing has eliminated nearly all of Hong Kong’s promised autonomy, as it neuters democratic processes and legal traditions that have been the bedrock of Hong Kong’s stability and prosperity,” Secretary of State Michael R. Pompeo said. “Once again, the CCP’s twisted vision of patriotism is a pretext to stifle freedom and the call for democracy.”