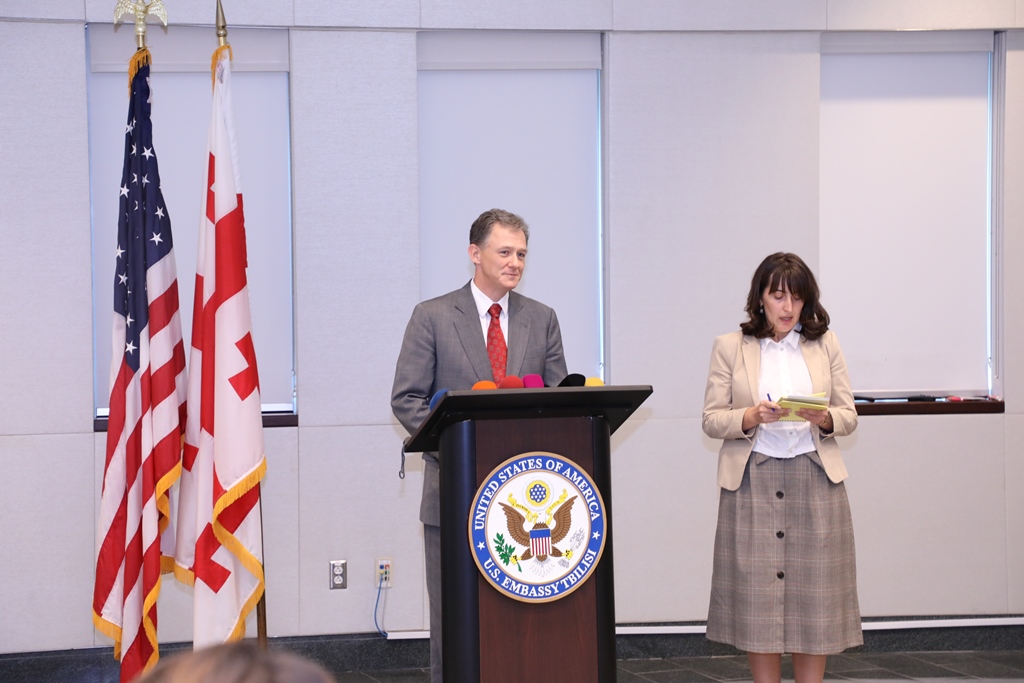 Good afternoon! My name is George Kent and I am the Deputy Assistant Secretary of State for the Caucuses and Eastern Europe.  On this visit, I am visiting Azerbaijan, Georgia, and Armenia to engage the counties of this region in our support for their sovereignty, territorial integrity and their success as prosperous, secure countries.  Here in Georgia, I am meeting and have met Georgian leaders, members of the business community and members of Georgian civil society about our support for Georgia to succeed as a country with territorial integrity in its internationally recognized borders, in support of Georgian sovereignty, and in support of Georgia’s ability to create a dynamic economy and in support of Georgia’s strength of democracy, so it can realize its goals of being a contributing member of both the European Union and NATO.  My trip is timed because I have just started my new responsibilities but I also understand that you have an election coming up.    The United States is very supportive of Georgia holding a successful election meets international standards.  And we understand, that elections in every country, including our own, are often times moments of heated rhetoric.  But we do hope, that the dialogue between Georgians can remain civil and, in particular, the members of civil society are not attacked for their rights as citizens to express their views.  In every democracy, there is a tension between members in society and those in office and that is the same in the U.S. and in Georgia.  But in healthy democratic societies, there is a healthy balance and dynamic between those two. And with that all, I am open up to questions. And please identify yourself and which organization you represent. Thank You!

DAS Kent: I am not Georgian and I am not going to comment on the details of the case that is being investigated. But, I think that it is important that when such allegations are raised that there be a thorough, quick and conclusive investigation.

DAS Kent: I think in every country there is always the process of carrying out the elections.  That is also occasionally a challenge in the United States because we have many different electoral systems.  Another is the rhetoric that is used between the candidates.  I understand from the last two days that the language of victors and traitors have been used.  I spent three years in Ukraine just recently and it is the same issue of people trying to demonize saying you are the traitor we are the victor.   I think in countries, like Georgia and Ukraine, both of which have suffered Russian aggression and have territory occupied by Russia political candidates need to focus on the positive feature of the country and remember that the real enemy is not Georgian.

q-n about the Georgian Government’s position towards Azerbaijani journalist Mukhtarli “kidnapped” from Georgia, and DAS Kent’s views on that and freedom of the press in General (GPB)

DAS Kent: It was raised, two days ago in a press conference in Baku by an Azerbaijani reporter within the context of the fate of Mr. Khashoggi, the Saudi journalist who disappeared at the Consulate in Istanbul.  The United States defends the right of journalists to do their work regardless of the country and it is always a concern for us when journalists disappear or are arrested without cause.  We have discussed that here in Tbilisi and also in Washington.  The United States did make it clear that it was a matter of concern. And, I think the Georgian officials understand that what happened did not meet the expectation of a country that looks to join the European Union and NATO, which are communities of values among which is respect for the freedom of media.

q-n about the pre-election environment, and Georgia’s chances to hold free and fair elections against allegations of the use of administrative resources and other alleged irregularities (Palitra TV)

DAS Kent: The United States supports and belongs to a number of organizations dedicated to the conduct of elections and that included the Organization for Security and Cooperation in Europe, OSCE, which has international observers on the ground here.  I talked to the OSCE, the U.S. International Republican Institute and National Democratic Institute [which] have been here for 20 years working with all Georgian parties on how to conduct and compete fairly in elections.    OSCE has a delegation in the United States who observe our elections, which will occur next month.  So, whether it is international organizations or Georgian organizations, there are many organizations looking at the conduct of elections and they will issue reports after the elections have happened.  The standards of OSCE, of which Georgia is a member is clear: elections should be conducted freely and fairly without intimidation and without the use of an administrative resource.  The U.S. Embassy will also be actively monitoring and observing the elections when they occur.