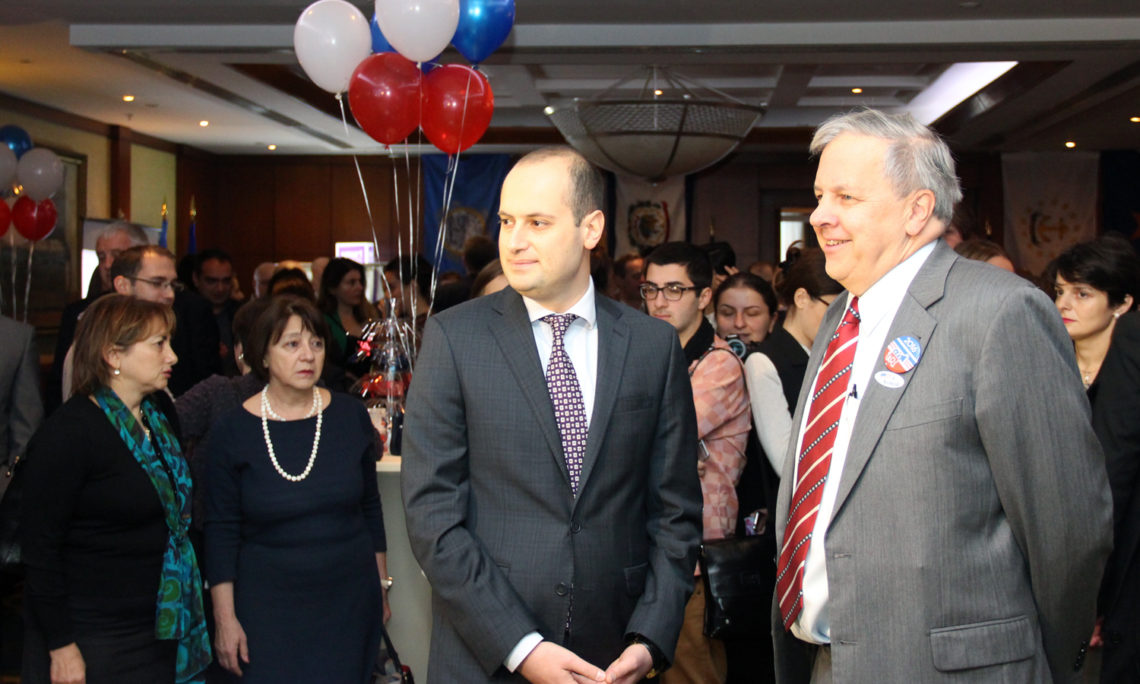 The U.S. Embassy, in cooperation with the American Chamber of Commerce in Georgia, celebrated the 58th quadrennial U.S. presidential election with an Election Day Breakfast November 9.  Activities included live streamed video coverage of election returns, a mock election, and U.S. history trivia.  Free and fair elections are the cornerstone of any democracy, which give citizens a voice in their government in the most fundamental way: by deciding who governs.

What an extraordinary night in America.  I want to thank Sara and the American Chamber of Commerce here for co-hosting this with us.  I want to thank Foreign Minister Janelidze for being here, and State Minister Bakradze and other officials from the Georgian government who have honored us with their presence here.  There is obviously a lot to process here for me.  I think that what is most important, is that, what is happening right now, it is showing that there is a real desire for change in the United States.  But, I think what will not change is the strength of our relationship with Georgia.  Whenever I go back to Washington I am absolutely stunned at the depth and breadth of support for what Georgia is doing here, what Georgia is trying to accomplish and is accomplishing in the face of all kinds of challenges, and that support will continue – there is Democratic support, there is Republican support.  I also want to say that our institutions are very strong in America; there are very strong checks and balances.  We do not know what the result is going to be yet.  I think the trend lines are going towards that protest vote obviously.  But , whoever wins this …look at  New Hampshire, look at how close it is,  18 votes ahead, wow. [If there are some] New Hampshire registered voters out there,  I hope you have voted.  Here is what I pledge to you, I pledge to work with whatever transition comes into place in the next few days to ensure that our level of support for Georgia stays as high as, and even stronger than it is right now.  Because you are doing things here that are just extraordinary in terms of standing up to regional challenges.  You have strong support in the executive branch.  There is always continuity no matter who wins an election among Foreign Service Officers like myself, and uniformed officers in the Department of Defense.   I know if there was a vote in the Congress and if there was a vote in the State Department and the Defense Department, support for Georgia would be about a 95 to 98 percent plurality and that will not change.  So, it is not over yet.  Please, we will stay open here as long as it takes.

Q-n: Commentary on the results of the election

Ambassador Kelly:  I would not say… It is too early to talk about results; I agree that trend lines, obviously [as] media are saying, are going in Trump’s direction.  And, I would just say that this is a really extraordinary night in America and I think we need to listen to what the people are saying.  I think that they are calling for an adjustment in U.S. domestic policy.  What I would say is that based on everything that I know, in terms of U.S. elected representatives, there is overwhelming support for Georgia.  I think the recent Congressional Resolution in support of Georgia’s territorial integrity and sovereignty shows that there will be no break in the continuity of support for Georgia.  As I said in there, I look forward to working  with whatever the transition is to make sure that support remains high.