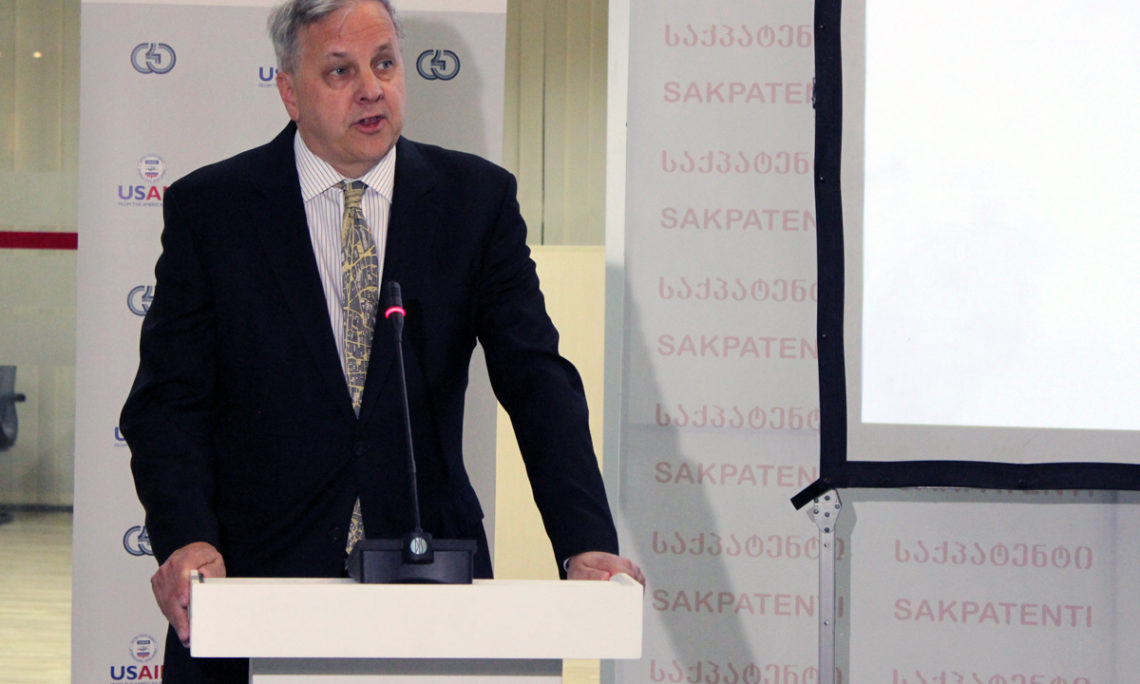 On September 16, Ambassador Kelly attended the Annual Conference of the Economic Policy Advocacy Coalition (EPAC) held at the Mtskheta offices of the Intellectual Property Center “Sakpatenti.”  The event acknowledged the efforts and success of EPAC’s first year of policy advocacy and highlighted the importance of civil society’s role in enabling progressive economic reforms.  The USAID Governing for Growth in Georgia (G4G) project established EPAC as

a means to strengthen the capacity of private sector actors to advocate for economic reforms by uniting 58 business organizations, including business associations, chambers of commerce, and think tanks.

Ambassador’s remarks to the Press after the Event

Q: Importance of the coalition and dialogue between public and private sector

A: I think that both the public and private sectors have a mutual interest, and that’s to ensure that Georgia continues to grow and develop and create jobs, so it’s very important that there be a dialogue between the private sector and government, between civil society and government.  I think this is one of the real strengths of the U.S. economy—the openness and communication between business and government, non-governmental organizations and government—so this is precisely why we are very pleased to be able to help fund this program and this dialogue, because we actually have mutual interests with Georgia, and that’s to see Georgia grow and develop as a country.

Q: How do you assess this public-private sector dialogue

A: I would asses it very positively.  I think that whenever I talk to people in Washington they ask me “how are things going in Georgia,” I say that Georgia’s real strength is a very confident and really assertive civil society here.  And I think that’s very much in the interests of the Georgian people, that civil society be outspoken, and just as important that you have a government that listens and is receptive to the concerns of civil society.

Q: Evaluate the steps taken so far by Georgia towards Euro-Atlantic integration

A: Georgia really is doing everything that it should in order to move closer to Euro-Atlantic institutions and our role here—our meaning the United States Embassy—our role here is to help Georgia attain that aspiration of integration into the Euro-Atlantic community, to make sure that it has the tools and the kind of advice it needs to be able to join NATO and the EU, and just to do everything it can.  And there will come a time when Georgia will get into NATO and the EU, and so most of our assistance projects are designed to help that goal.

Q: Does Georgia have enough tools?

A: I think that it does have all the tools.  I think that that next step really is to enact some reforms in the Ministry of Defense.  The new Minister, Mr. Izoria, has taken that as a real priority.  So we’re working with the Ministry of Defense and with the Prime Minister’s Office to ensure that those reforms are enacted.  In terms of professionalism of the Georgian military, yeah—they’re really there.  They have the tools they need.  But there are some reforms we want to help them with too.

Q: Which direction do they need help? (the military)

A: I think really what they need is to modernize their force structure.  I think that they need to put in place some reforms that will make them more adaptable to some of the emerging threats.  And we really want to make sure that they have a twenty-first century fighting force.  So that’s what we’re working towards with them, is to have that kind of force.  We’ve learned some lessons in recent years about fighting new threats.  They’re not just threats that come from tanks and armies, they’re threats that come from cyberspace, they’re threats that come from terrorists, transnational threats, and so we want to help Georgia have that kind of very adaptable force.