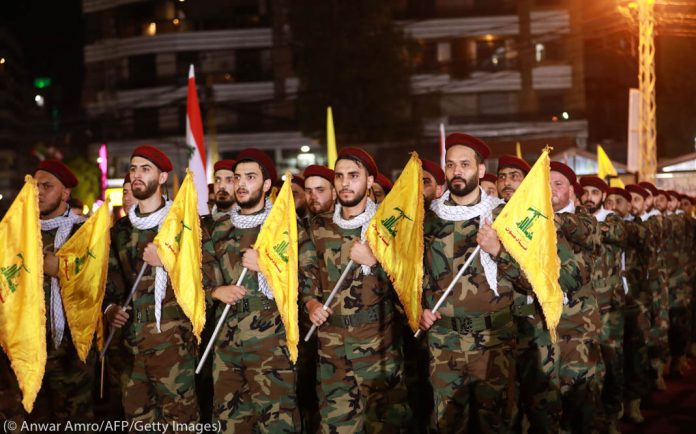 Members of Hizballah parade in a suburb of Beirut in May 2019. (© Anwar Amro/AFP/Getty Images)

European nations are increasingly recognizing the threat of Hizballah and blocking the Iran-backed terrorist organization from raising money or conducting other activities within their borders.

U.S. Secretary of State Michael R. Pompeo commended Estonia’s October 22 ban on Hizballah members and affiliates entering the country. Estonia joins a host of nations that refuse to distinguish between the political and military arms of the terrorist group.

“Estonia’s decisive action recognizes that Hizballah is a terrorist organization in its entirety and poses a significant threat in Europe and elsewhere,” Pompeo said. “We urge all countries to take whatever action they can to prevent Hizballah operatives, recruiters, and financiers from operating in their territories.”

The United States designated Hizballah a foreign terrorist organization in 1997, making it a crime to provide material support to the group and freezing its assets in U.S. financial institutions.

U.S. officials continue to take steps to block the organization from accessing funds and plotting attacks, and are encouraging other nations to take similar steps.

Estonia took an important step against the Iran-backed terrorist organization Hizballah by prohibiting their terrorists from entering Estonian territory. We urge our European partners to follow Estonia’s example and prevent Hizballah from operating in Europe.

Those recent actions reflect a growing worldwide consensus on the risks from Hizballah’s political and military activities. In October, Guatemala designated Hizballah a terrorist group in its entirety, limiting its ability to raise money in the Western Hemisphere.

Argentina, Colombia, Honduras, Kosovo and the United Kingdom also have announced new or expanded terrorist designations of Hizballah within the past 18 months.

Meanwhile, the United States continues to pressure Hizballah’s leaders and its financial supporters in Iran’s regime. On October 22, the U.S. Department of the Treasury sanctioned two members of Hizballah’s Central Council, which elects members of the Shura Council, which oversees all Hizballah activities, including terrorism.

As part of the Rewards for Justice Program’s standing offer of up to $10 million for information that will help to disrupt Hizballah’s activities or finances, the U.S. Department of State on October 23 added the names of three more individuals to its list of Hizballah financiers and facilitators.

Started in 1984, Rewards for Justice has paid over $150 million to more than 100 people for information that prevented terrorist acts or helped bring terrorists to justice.