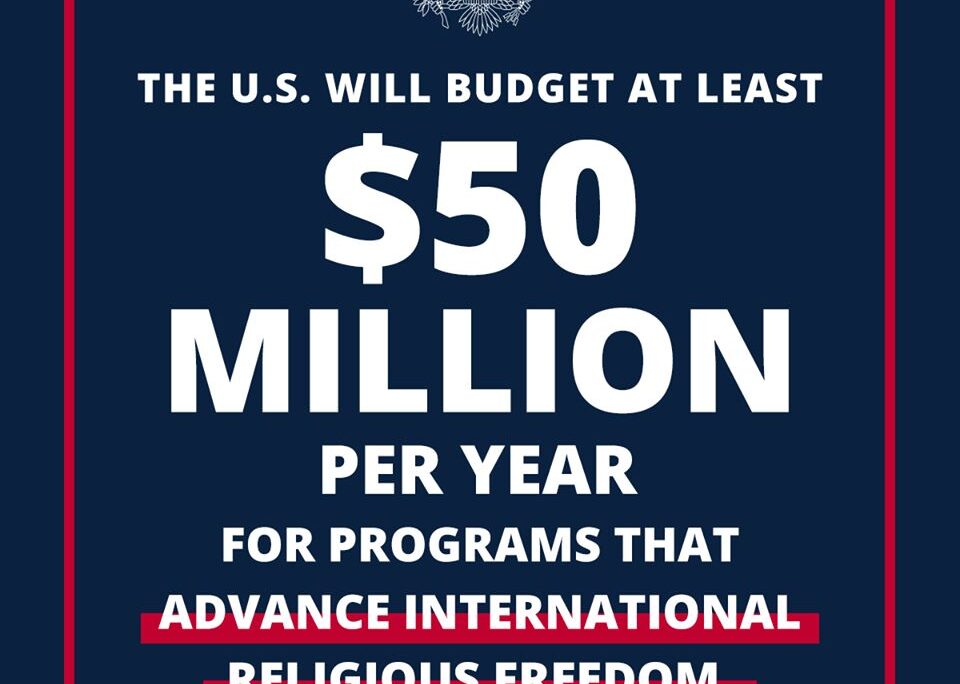 By the authority vested in me as President by the Constitution and the laws of the United States of America, it is hereby ordered as follows:

Section 1.  Policy.  (a)  Religious freedom, America’s first freedom, is a moral and national security imperative.  Religious freedom for all people worldwide is a foreign policy priority of the United States, and the United States will respect and vigorously promote this freedom.  As stated in the 2017 National Security Strategy, our Founders understood religious freedom not as a creation of the state, but as a gift of God to every person and a right that is fundamental for the flourishing of our society.

(b)  Religious communities and organizations, and other institutions of civil society, are vital partners in United States Government efforts to advance religious freedom around the world.  It is the policy of the United States to engage robustly and continually with civil society organizations — including those in foreign countries — to inform United States Government policies, programs, and activities related to international religious freedom.

Sec. 2.  Prioritization of International Religious Freedom.  Within 180 days of the date of this order, the Secretary of State (Secretary) shall, in consultation with the Administrator of the United States Agency for International Development (USAID), develop a plan to prioritize international religious freedom in the planning and implementation of United States foreign policy and in the foreign assistance programs of the Department of State and USAID.

Sec. 3.  Foreign Assistance Funding for International Religious Freedom.  (a)  The Secretary shall, in consultation with the Administrator of USAID, budget at least $50 million per fiscal year for programs that advance international religious freedom, to the extent feasible and permitted by law and subject to the availability of appropriations.  Such programs shall include those intended to anticipate, prevent, and respond to attacks against individuals and groups on the basis of their religion, including programs designed to help ensure that such groups can persevere as distinct communities; to promote accountability for the perpetrators of such attacks; to ensure equal rights and legal protections for individuals and groups regardless of belief; to improve the safety and security of houses of worship and public spaces for all faiths; and to protect and preserve the cultural heritages of religious communities.

(b)  Executive departments and agencies (agencies) that fund foreign assistance programs shall ensure that faith-based and religious entities, including eligible entities in foreign countries, are not discriminated against on the basis of religious identity or religious belief when competing for Federal funding, to the extent permitted by law.

(b)  In meetings with their counterparts in foreign governments, the heads of agencies shall, when appropriate and in coordination with the Secretary, raise concerns about international religious freedom and cases that involve individuals imprisoned because of their religion.

(c)  The Secretary shall advocate for United States international religious freedom policy in both bilateral and multilateral fora, when appropriate, and shall direct the Administrator of USAID to do the same.

Sec. 5.  Training for Federal Officials.  (a)  The Secretary shall require all Department of State civil service employees in the Foreign Affairs Series to undertake training modeled on the international religious freedom training described in section 708(a) of the Foreign Service Act of 1980 (Public Law 96-465), as amended by section 103(a)(1) of the Frank R. Wolf International Religious Freedom Act (Public Law 114-281).

(b)  Within 90 days of the date of this order, the heads of all agencies that assign personnel to positions overseas shall submit plans to the President, through the Assistant to the President for National Security Affairs, detailing how their agencies will incorporate the type of training described in subsection (a) of this section into the training required before the start of overseas assignments for all personnel who are to be stationed abroad, or who will deploy and remain abroad, in one location for 30 days or more.

(c)  All Federal employees subject to these requirements shall be required to complete international religious freedom training not less frequently than once every 3 years.

Sec. 6.  Economic Tools.  (a)  The Secretary and the Secretary of the Treasury shall, in consultation with the Assistant to the President for National Security Affairs, and through the process described in National Security Presidential Memorandum-4 of April 4, 2017 (Organization of the National Security Council, the Homeland Security Council, and Subcommittees), develop recommendations to prioritize the appropriate use of economic tools to advance international religious freedom in countries of particular concern, countries on the Special Watch List, countries in which there are entities of particular concern, and any other countries that have engaged in or tolerated violations of religious freedom as noted in the report required by section 102(b) of the Act.  These economic tools may include, as appropriate and to the extent permitted by law, increasing religious freedom programming, realigning foreign assistance to better reflect country circumstances, or restricting the issuance of visas under section 604(a) of the Act.

(b)  The Secretary of the Treasury, in consultation with the Secretary of State, may consider imposing sanctions under Executive Order 13818 of December 20, 2017 (Blocking the Property of Persons Involved in Serious Human Rights Abuse or Corruption), which, among other things, implements the Global Magnitsky Human Rights Accountability Act (Public Law 114-328).

Sec. 7.  Definitions.  For purposes of this order:

(b)  “Entity of particular concern” is defined as provided in section 301 of the Frank R. Wolf International Religious Freedom Act (Public Law 114-281);

(d)  “Violations of religious freedom” is defined as provided in section 3(16) of the Act.

Sec. 8.  General Provisions.  (a)  Nothing in this order shall be construed to impair or otherwise affect:

(i)   the authority granted by law to an executive department or agency, or the head thereof; or

(ii)  the functions of the Director of the Office of Management and Budget relating to budgetary, administrative, or legislative proposals.

(b)  This order shall be implemented consistent with applicable law and subject to the availability of appropriations.

(c)  This order is not intended to, and does not, create any right or benefit, substantive or procedural, enforceable at law or in equity by any party against the United States, its departments, agencies, or entities, its officers, employees, or agents, or any other person.