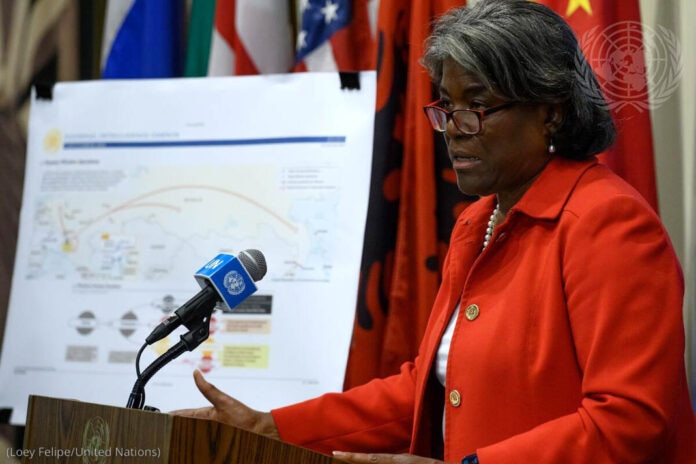 U.S. Ambassador to the United Nations Linda Thomas-Greenfield briefs reporters ahead of the Security Council meeting on maintenance of peace and security of Ukraine. (Loey Felipe/United Nations)

“Filtered. The word does not begin to convey the horror and the depravity of these pre-meditated policies,” said U.S. Ambassador to the United Nations Linda Thomas-Greenfield during a September 7 U.N. Security Council Meeting.

Thomas-Greenfield detailed for the council the numerous mounting and credible reports of the Russian government’s filtration sites in parts of eastern Ukraine that are controlled or occupied by Russia and relocation centers within Russia. Some of these sites were documented in a recent report from Yale’s Humanitarian Research Lab.

“But these horrors are not limited to the centers that have been set up,” she said, “filtration may also occur at checkpoints, routine traffic stops, or on the streets.”

President Putin and the Kremlin will not commit these systematic abuses with impunity. We are holding the perpetrators of these atrocities to account. The U.S. and our partners will not be silent. Ukraine and its citizens deserve justice. pic.twitter.com/1d5zSocUlf

Sources including the Russian government indicate that Russian authorities have interrogated, detained, or deported between 900,000 and 1.6 million Ukrainian citizens, including children, from their homes to Russia.

The United States estimates that in July alone, more than 1,800 children were transferred from Russian-controlled areas of Ukraine to Russia — some separated from their families or taken from orphanages and then put up for adoption in Russia.

Adults considered by Russia and its proxies to be threatening — because of perceived allegiance to Ukraine — are “disappeared” or detained in conditions where human rights abuses run rampant. Thomas-Greenfield recounted how a Ukrainian witness said she overheard a Russian soldier say, “I shot at least 10 people” who did not pass the filtration process.

Why is the Russian government engaging in filtration operations in Ukraine? Thomas-Greenfield says it’s because they’re preparing to annex additional territory in Ukraine. “The goal is to change sentiments by force,” she said. “To provide a fraudulent veneer of legitimacy for the Russian occupation and eventual, purported annexation of even more Ukrainian territory.”

The United States calls on the United Nations and its allies to urge Russia to give independent observers, including international and nongovernmental organizations, and humanitarian organizations access to observe filtration sites and relocation centers in Ukraine and Russia for themselves.

“Until Russia provides that access, we will have to rely on the evidence we have accumulated and the brave testimony of survivors,” she concluded. “The picture they paint, alongside the mounting reports, is chilling.”