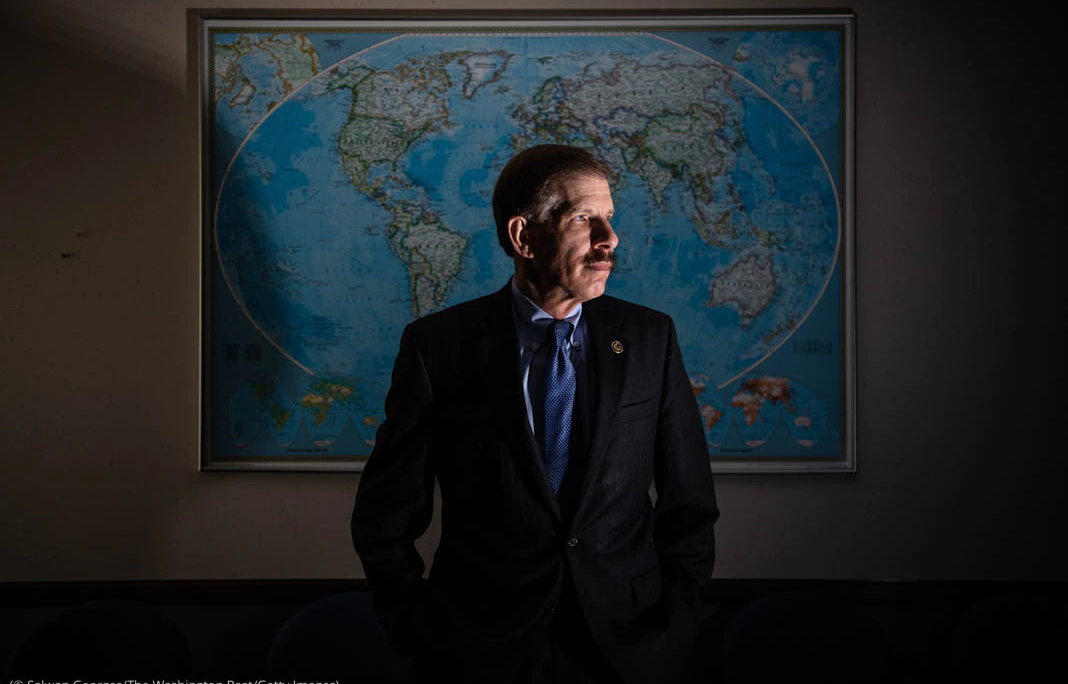 Eli Rosenbaum in his office at the U.S. Department of Justice in 2018 (© Salwan Georges/The Washington Post/Getty Images)

Prosecuting war crimes takes diligence and patience, and those traits are essential to bringing offenders to justice.

Eli Rosenbaum has spent decades investigating and prosecuting Nazi war criminals at the U.S. Department of Justice. Today he is coordinating the Justice Department’s efforts — and working alongside other federal agencies — to hold accountable those responsible for war crimes and other atrocities in Ukraine.

“It is certainly our responsibility as countries that respect the rule of law to ensure that those who have committed ghastly crimes in the wake of Russia’s unprovoked invasion of Ukraine do not escape justice,” Rosenbaum said during the Ukraine Accountability Conference in The Hague on July 14.

For example, after Russia’s forces withdrew from the Kyiv suburb of Bucha, city officials in April recovered hundreds of bodies from the streets and discovered mass graves. The atrocity outraged the world and many nations expelled their Russian diplomats in protest.

In a statement delivered in The Hague July 14, U.S. Secretary of State Antony Blinken said, “Every atrocity sends out waves of suffering that most of us cannot comprehend … It is our responsibility to hold the perpetrators accountable — and deliver justice and support for the growing number of victims.”

Rosenbaum has been called a “Nazi hunter” for his years identifying, denaturalizing and deporting Nazi war criminals from the United States. He worked on 100 cases that led to forfeited citizenship or deportation of accused Nazis, including the successful prosecution in 2020 of a former Nazi concentration camp guard in Tennessee — 75 years after the crime was committed.

“There is no hiding place for war criminals,” U.S. Attorney General Merrick Garland said when announcing Rosenbaum’s appointment in June as counselor for war crimes accountability at the Justice Department.

During his career Rosenbaum also has prosecuted war crimes tied to atrocities committed in Bosnia, Guatemala and Rwanda.

“It may take time, even years in some instances, for the conditions to exist to bring those committing such crimes in Ukraine to justice, but I would submit that recent history shows that the civilized world is more committed than ever before to ending impunity for those crimes,” Rosenbaum told VOA.

Rosenbaum said his team will share evidence about possible war crimes with investigators from other nations.

“I’M OPTIMISTIC THAT JUSTICE
WILL BE OBTAINED.”

Ukraine will handle prosecuting most of the prospective cases, but Rosenbaum said individuals could be tried in other countries. The United States also is supporting efforts by the International Criminal Court to investigate and preserve evidence of alleged atrocity crimes in Ukraine.

“The evidence is being collected as we speak,” Rosenbaum said July 14 at The Hague. “We cannot afford to lose time, but we must also ensure quality.”