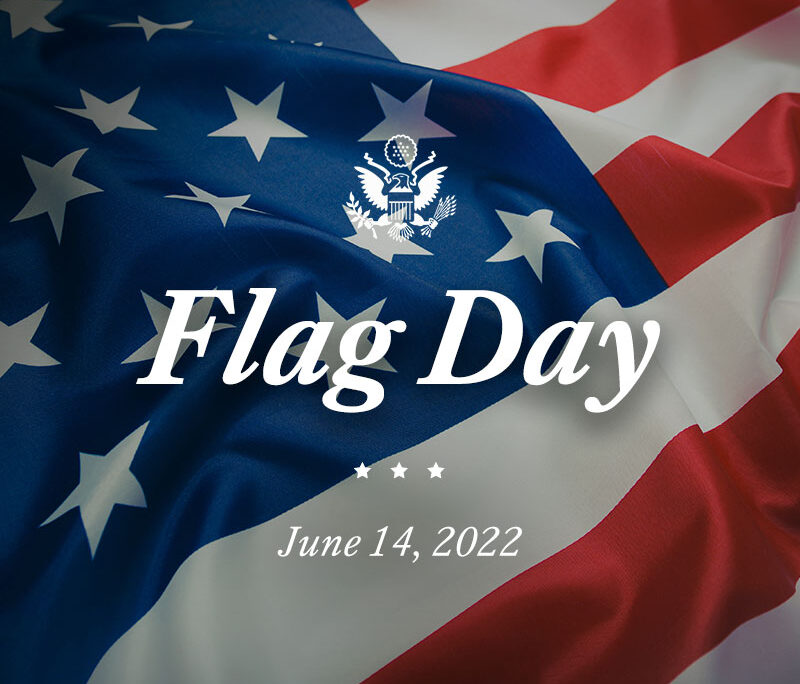 On June 14, 1777, the Continental Congress approved the design of a national flag.

Since 1916, when President Woodrow Wilson issued a presidential proclamation establishing a national Flag Day on June 14, Americans have commemorated the adoption of the Stars and Stripes in many ways–displaying the flag in the front of their homes, parades, and other patriotic observances. Prior to 1916, many localities and a few states had been celebrating the day for years. Congressional legislation designating that date as the national Flag Day was signed into law by President Harry Truman in 1949; the legislation also called upon the president to issue a flag day proclamation every year.

Resolved, that the Flag of the thirteen United States shall be thirteen stripes, alternate red and white; that the Union be thirteen stars, white on a blue field, representing a new constellation.

According to legend, in 1776, George Washington commissioned Philadelphia seamstress Betsy Ross to create a flag for the new nation. Scholars, however, credit the flag’s design to Francis Hopkinson, who also designed the Great Seal and first coin of the United States. Even so, Ross most likely met Washington and certainly sewed early American flags in her family’s Philadelphia upholstery shop. To date, there have been twenty-seven official versions of the flag, but the arrangement of the stars varied according to the flag-makers’ preferences until 1912 when President Taft standardized the then-new flag’s forty-eight stars into six rows of eight. The forty-nine-star flag (1959-60), as well as the fifty-star flag, also have standardized star patterns. The current version of the flag dates to July 4, 1960, after Hawaii became the fiftieth state on August 21, 1959.

Interviews in American Life Histories: Manuscripts from the Federal Writers’ Project, 1936 to 1940 contain entertaining examples of Flag Day in the American vernacular. For example, a search on Flag Day retrieves the following conversation between Mr. Richmond and Mr. Davis:

“Why ain’t you got your flag out?” says Mr. Richmond, entering the gas station in which he spends much of his time these days. “You know today is flag day, don’t you?”

“I guess the boss forgot to buy a flag, George,” says Mr. Davis, the station attendant. “And even if we had one, we ain’t got no place to put it.”

Mr. Richmond: “That’s a fine state of affairs, that is. Here they are tryin’ to bring home to you people the fact that you’re livin’ in one of the few countries where you can draw a free breath and you don’t even know it. You’re supposed to have flags out all this week. Don’t you know that? This is flag day and this is flag week. Where’s your patriotism?”

Mr. Davis: “What the hell are you hollerin’ about, George? You’re always runnin’ the country down. They can’t do anything to suit you. You’re worryin’ about taxes and future generations and all like that. Where’s your patriotism?”

“I do not salute the flag because I have promised to do the will of God,” wrote ten-year-old Billy Gobitas, a Jehovah’s Witness, to the board of the Minersville (Pennsylvania) School District in 1935. Like most public school students at the time, Gobitas was required to salute and pledge allegiance to the flag daily. His refusal to do so touched off one of several constitutional battles over the authority of the state to require respect for national symbols and the right of individuals to freedom of speech.

Both the United States district court and the court of appeals ruled in favor of the right to refuse to salute the flag. In 1940, however, the U.S. Supreme Court decided the government did have the authority to compel respect for the flag as a central symbol of national unity. Just three years later, on June 14, 1943, the Supreme Court reconsidered its earlier decision, holding that the right of free speech guaranteed by the First Amendment denies the government the authority to compel individuals to salute the American flag or to recite the pledge of allegiance.

Billy Gobitas’ letter is also displayed (in color) in the online exhibition, American Treasures of the Library of Congress. Other related treasures include Francis Scott Key’s “Star-Spangled Banner” and John Philip Sousa’s “The Stars and Stripes Forever.”