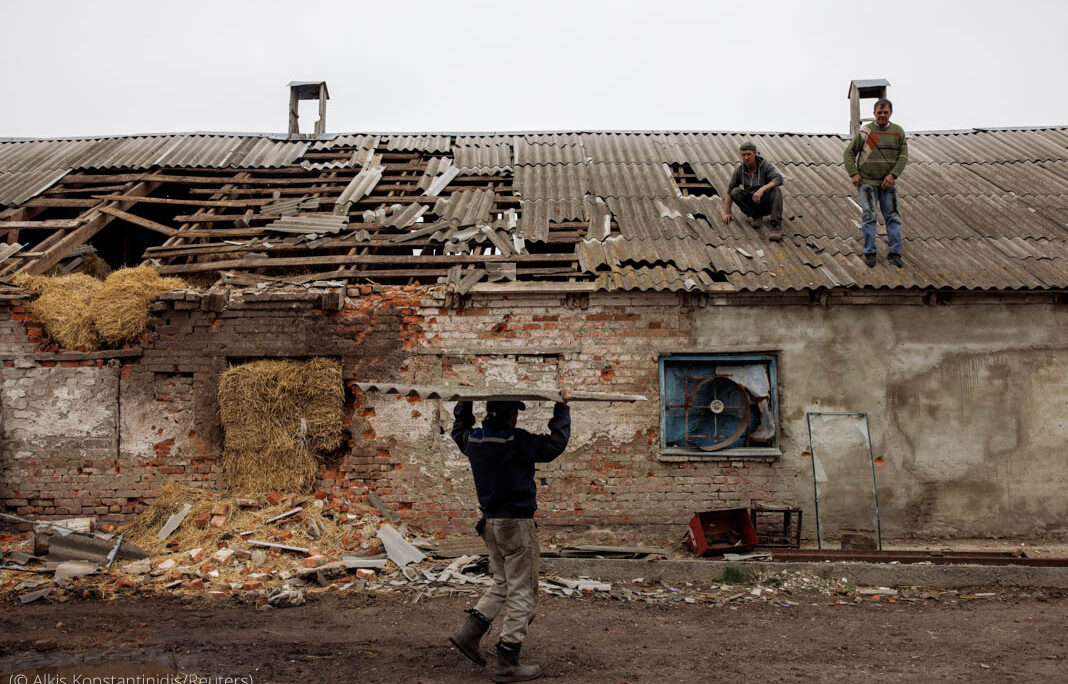 Workers repair a farm building April 9 that was damaged by a Russian mortar in the Kharkiv region of Ukraine. (© Alkis Konstantinidis/Reuters)

And yet Putin blames U.S. and international sanctions for global food shortages. This claim, like many of the Russian government’s assertions about the war, is false. The United States exempts transactions for food, agricultural products and medical supplies from sanctions.

“As long as Russia continues this brutal campaign, innocent people are going to pay the price,” said Ambassador Cindy McCain, U.S. permanent representative to the U.N. agencies in Rome, on April 5.

Known as the breadbasket of Europe, Ukraine is 70% farmland and a major agricultural exporter.

That will not happen now. Because of Putin’s war, Ukraine’s total agricultural output is expected to decline between 20% and 50% during the next few months.

An estimated 3.5 million hectares in Ukraine will not be planted this year. Instead of planting fields, many of Ukraine’s farmers are taking up arms to defend their homeland. Others stay away from their fields fearing Russian shelling, unexploded ordnance or land mines.

Before the war, Ukraine typically sent 40% of its wheat and corn exports to the Middle East and Africa. That too is threatened. The World Food Programme expects the food crisis will affect 41 million people in Central and West Africa this year, up from 10.7 million in 2019.

Also, Ukrainian officials said Russian soldiers have stolen grain from four occupied areas, including the Donbas region, and sent it to Russia. Russian attacks in other areas have destroyed at least six grain storage facilities.

Even as the Russian military attacks transit routes, it also blocks access to Ukraine’s Black Sea ports. An estimated 95% of Ukraine’s grain exports leave from seaports.

Russia has attacked Bangladeshi and Panamanian ships, among others, that carried goods out of these ports. At least one large Bangladeshi ship suffered a direct Russian hit early in the war.

“We have to open up these ports so that food can move in and out of Ukraine,” said David Beasley, WFP’s executive director. “The world demands it because hundreds of millions of people globally depend on food that comes through these ports.”

While Ukraine used to export up to 5 million tons of grain per month, shipments have all but stopped due to the Kremlin’s blockade of Ukrainian ports and nearly 300 cargo ships in the Black Sea. These actions threaten to put millions at risk of famine and malnutrition. pic.twitter.com/Fs4giMm0XD

Russia’s war has undermined its own ability to export agricultural commodities by making maritime shipping on the Black Sea an expensive and risky enterprise, and by causing hundreds of major international firms to cease or suspend business with Russia in protest of this unjustifiable invasion, to include major shipping.

The United States government is acting on several fronts to address global food insecurity and has committed to: