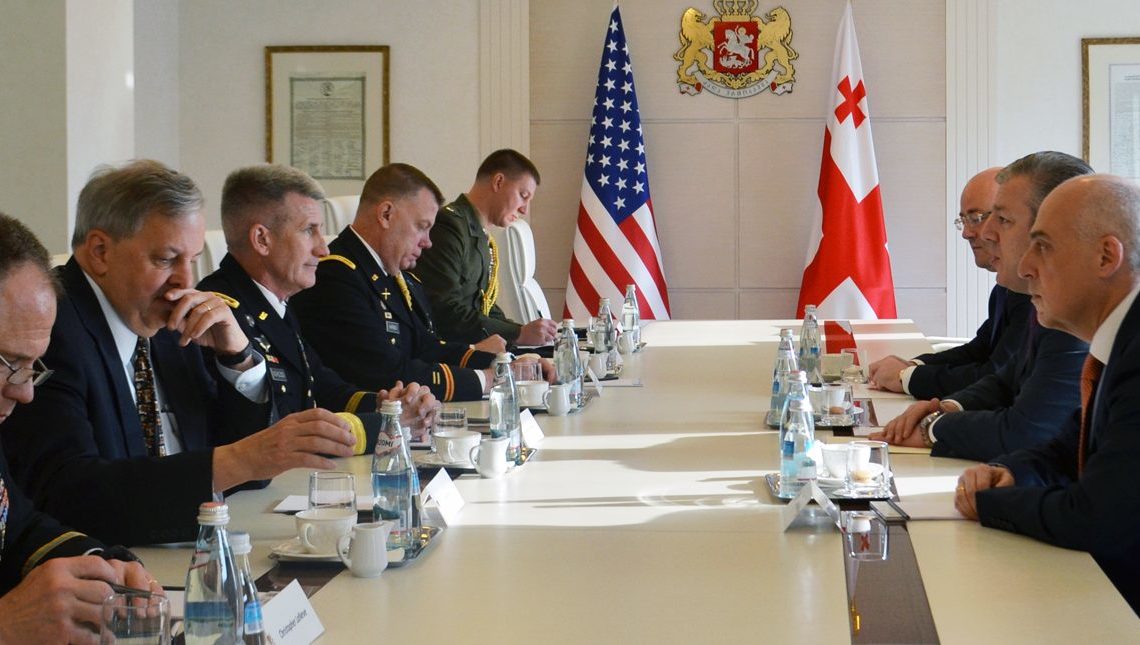 General John Nicholson, Commander of NATO’s Resolute Support and United States Forces – Afghanistan, and Ambassador Kelly met with Prime Minister Giorgi Kvirikashvili and Minister of Defense Levan Izoria November 7.  They discussed the international commitment to Afghanistan and the NATO and USFOR-A missions, as well as Georgia’s contribution to the Resolute Support Mission.  General Nicholson’s visit demonstrates the importance of U.S.-Georgia bilateral relations and appreciation for Georgia’s continued contributions to international security missions.  The visit is yet another illustration of the U.S. commitment to enhancing security in Eastern Europe and the Black Sea region.

Good morning, everyone. I am General John Nicholson, the Commander of NATO Resolute Support in Afghanistan and U.S. Forces – Afghanistan.  First, I wanted to say thank you to the Government of Georgia, to the Georgian Armed Forces, to the people of Georgia for their strong support of our mission in Afghanistan, where Georgia is the largest non-NATO troop contributing nation and has been with us, America, and our conflicts in Afghanistan, Iraq for years.  I wanted you to know how deeply we appreciate this as Americans, how deeply we appreciate this within NATO and how important your contribution is.  We want to extend our sympathies to those brave Georgian soldiers who have been wounded or killed in these conflicts and we send them our thoughts and prayers.  And, as we go forward in Afghanistan, it is very encouraging to me as commander to know that we are serving alongside with such professional, disciplined, and competent soldiers as we have from Georgia.  We have had the opportunity here in the last day or so to meet with your Chief of Defense, Minister of Defense, and the Prime Minister.  These meetings are going extremely well; it is been very encouraging to hear Georgia’s renewed commitment.  We also talked about the strong bilateral relationship between the United States and Georgia.  As an American General, I want to say how deeply we appreciate Georgia’s partnership and it is very encouraging to me to see the exercises, such as Nobel Partner that occurred last May, in which we deployed American and British soldiers here to Georgia to train alongside Georgian Armed Forces.  And we look forward to continuing this, and continuing our engagement with Georgia for the coming years.  As you know, the United States strongly supports Georgia’s sovereignty and territorial integrity, and we see these operations, training events as great opportunities to enhance the interoperability of our forces.

The security of the Black Sea is extremely important to NATO and, of course, we have many NATO allies who border the Black Sea: Romania, Bulgaria, Turkey – all critical NATO allies and Georgia, our strong partner in our operations.  So Black Sea security remains a top priority for the alliance.  As you know, there have been what we call insurance measures in the Black Sea.  These have involved other members sending forces to the region, air patrols, sea patrols, and land exercises, such as Nobel Partner, conducted in Georgia.  So Black Sea security and the security of this entire region remains a very high priority for now.